New appointment to Dairygold board

Dairygold Co-op has announced the appointment of a new member to its co-operative board.

Donal Shinnick, a member of the Mallow Regional Committee, has been elected to the board to fill the position vacated by Donal Buckley.

Buckley is stepping down having served the maximum permitted term of 10 years on the Dairygold board. Shinnick will take up his position from January 2019.

Shinnick, a dairy farmer, from Buttevant, Co. Cork, has been a member of Mallow Regional Committee since 2003.

Shinnick is married to Ann and has four children. He is an active member of the Dairygold Teagasc Discussion Group.

In other Dairygold news, the co-operative offered its congratulations to suppliers and co-op members Trevor and Olive Crowley who won the ‘Reduced Carbon Footprint’ category at the recent Bord Bia Origin Green Farmer Awards.

The Crowleys were among a total of 11 category winners which were announced on the night following a rigorous process that included on-farm judging by teams from Bord Bia and Teagasc among others.

Back on December 12, over 240 farmers and senior representatives from farming organisations and the agri-food industry gathered to celebrate the achievements of the 39 finalists, drawn from the dairy, beef and horticulture sectors across the country.

All finalists will be invited by Bord Bia to participate in an organised visit to an overseas market to see how Bord Bia uses its achievements in sustainability to win new business. 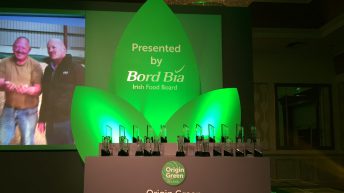