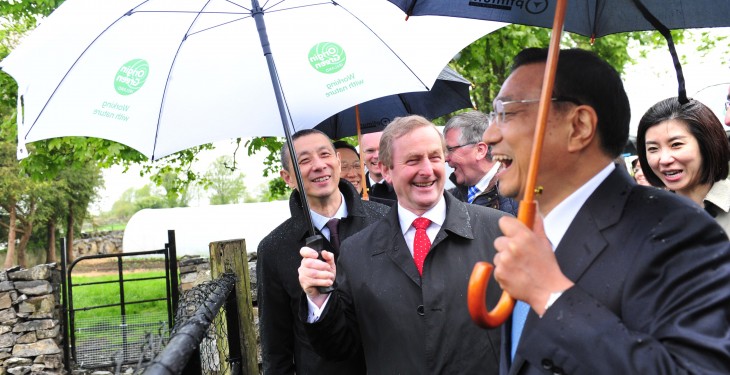 Chinese Premier Li Keqiang was in Ireland at weekend on a stopover visit before embarking on a tour of Latin America.

CCTV’s Wang Tongxuan reported on the Premier’s visit to Ireland, which included a visit to Garvey family farm in Co. Mayo.

“A quick stopover on the Emerald Isle, Chinese Premier Li Keqiang and his wife were greeted at Shannon airport. Both countries are keen to explore ways of developing their relationship.

“It’s not so long ago that Irish President Michael D Higgins was on an official state visit to China so this is seen as another significant step in forging even stronger ties,” Wang says.

She said that with time not on the Premier’s side, he and Ireland’s Taoiseach Enda Kenny got to work straight away agreeing to expand co-operation in trade, clean energy and education.

“Li called for closer cooperation in agriculture, bio-medicine and information technology, as well as in culture and tourism. He also proposed to further facilitate two-way travel for business people, students and tourists.

“They agreed a visa-waiver deal for holders of diplomatic and service passports,” she said.

Wang said that Kenny, for his part, echoed Li’s sentiments, saying his government is willing to work with China to enhance cooperation in areas such as trade and agriculture, and expand personnel exchanges.

After their talks, the leaders witnessed the signing of cooperation deals in travel and agriculture.

“With agriculture being a sector of mutual interest, Kenny took Premier Li, and his wife Prof. Cheng Hong, to a typical Irish family-run cow farm in County Mayo, where they got a special serving of home-made Irish bread, cheese and milk,” Wang said.

The news website reports that the Premier asked in detail about the various operations at the 107ha farm such as “cow-raising, agro-product processing, and quality management and monitoring”.

Noting that China has become Ireland’s fastest-growing agro-product export market, he said the two countries have a bright future in agricultural and husbandry cooperation, Wang said.

You can look at CCTV’S news report on the visit here: