Commenting after the farm visit, Minister Coveney said the visit represented an invaluable opportunity to demonstrate the best of Irish farming to the Chinese Government.

“It combines traditional values and the best of nature with science and technology, to produce the highest quality food, with different generations of the family working together. It is a fantastic showcase for Irish food production and in many ways, the highlight of Premier Li’s visit to Ireland.”

Taoiseach & Minister Coveney chat with the Garvey family in their milking parlour ahead of the arrival of Premier Li: pic.twitter.com/kDGMBjUYNr 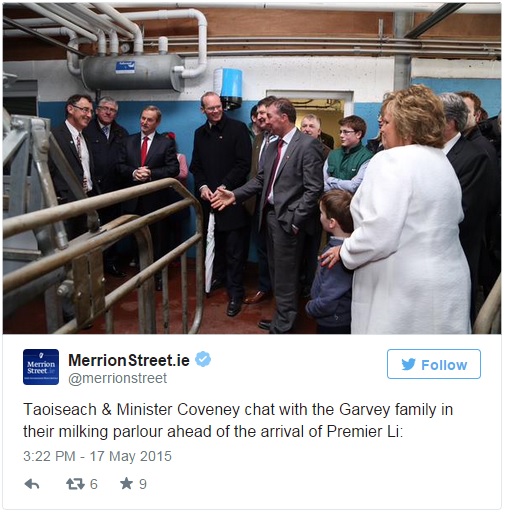 The 109 hectare holding is owned by the Garvey family, with three generations actively involved in the operation. Predominantly a dairy enterprise, with 110 Holstein/Friesian dairy cows, the Garvey farm also includes a suckler beef business consisting of 30 Limousin-cross cows.

According to Minister Coveney the enthusiasm and hospitality of Cathal Garvey, his wife Mary and their family in welcoming the large delegation to their farm and home made a deep impression on the Chinese visitors.

Witnessed by the Taoiseach Enda Kenny and Premier Li, Minister Coveney and his counterpart, Minister Han Changfu, signed a joint statement on deepening agricultural cooperation at a meeting in Ashford Castle later in the evening. 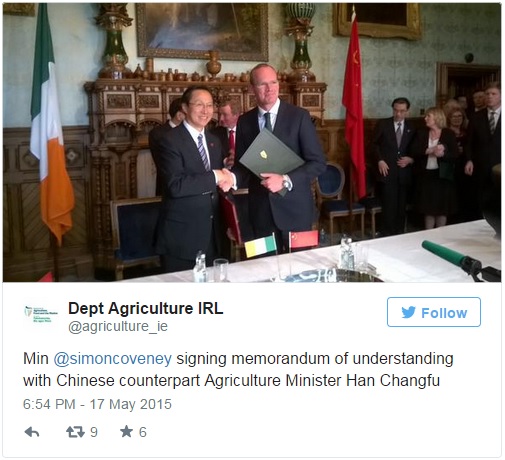 Minister Han Changfu was a key figure in the lifting of the Chinese ban on Irish beef following Minister Coveney’s trade mission to China last November, and this visit afforded Minister Coveney an opportunity to renew the discussion with his Chinese counterpart on a range of agri food and market access issues.

Speaking after a dinner hosted by the Taoiseach in Ashford Castle, the Minister said Ireland greatly appreciates the lifting of the ban on Irish beef imports by China in February.

“This is a powerful endorsement of Ireland’s high standards by an administration for which food safety is a critical prerequisite for trade.

“Ireland is the first EU country to re-gain access to the US beef market and to have the beef ban lifted in China.

“We are co-operating closely with the Chinese authorities on the next technical steps to ensure that trade can commence as soon as possible and discussions are also continuing on access for sheepmeat and poultry.”

Last year, Irish agri-food exports to China increased to €620 million, making China Ireland’s second most important market after the EU as a whole.

Agri-food now accounts for almost 30% of Ireland’s exports to China. This reflects the strong strategic partnerships being built between Chinese and Irish food companies, following a period of intensive engagement at political, diplomatic and technical level on trade development issues.

Dairy products accounted for the majority of Irish exports, but there have also been significant increases in pigmeat and seafood exports in recent years. These sectors are all vital contributors to employment and the Irish economy generally. 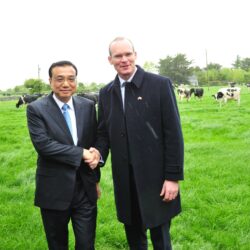 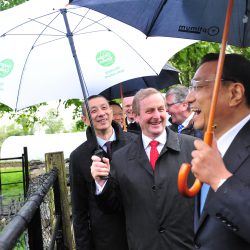 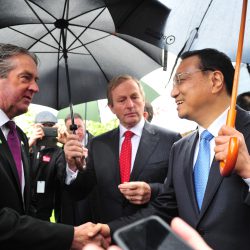