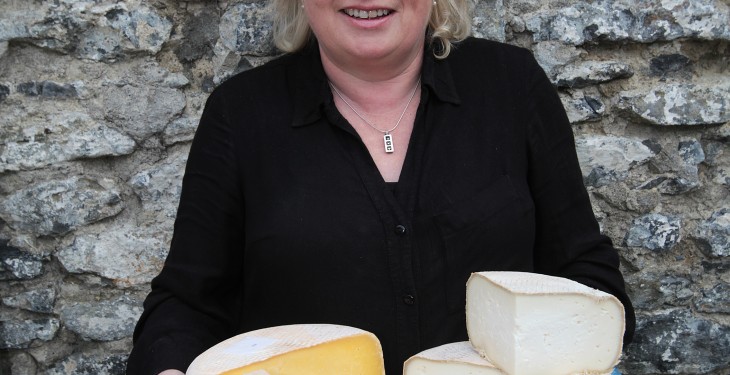 AgriLand talks to Ailish Durkin of Knockdrinna Farmhouse Cheese on the commitment and passion involved in creating an award-winning cheese.

Experimenting in her home kitchen in 2004, avid foodie Helen Finnegan made the very first batch of what was to become Knockdrinna Farmhouse Cheese. Deciding to invest in her passion for good food, Helen left her job as a community enterprise officer and began making cheese full time with some help from Corkonian cheesemaker and pastry chef Edel Foley and using milk from a local herd.

So after some experimenting in the kitchen, the first Knockdrinna cheese – Knockdrinna Snow goat’s camembert was born.

Today the company’s cheeses are sought after by the best restaurants and  artisan food stores, including Chapter One Restaurant, Gordon Ramsey, Sheridans Cheesemongers and Harrods of London, to name but a few. Knockdrinna currently employs five staff at its dedicated cheesemaking facility located onsite at the Finnegan family farm in Stoneyford, Co Kilkenny.

Knockdrinna produces a mouth-watering range of cheese, Durkin elaborates on some of its best sellers: “Our Knockdrinna Gold semi-hard goats cheese has been one of our biggest successes and is always very popular with chefs and for cheeseboards. It also picked up a major category award at this year’s British Cheese Awards for ‘Best British Modern’. Our other top sellers would be our Kilree semi soft goat’s cheese, which won Supreme Champion at the British Cheese Awards in 2011, and our Knockdrinna Snow Goats camembert that you can pick up in most Superquinn stores.”

The award-winning cheese can currently be found on the shelves of many major supermarkets such as Tesco and Supervalu as well as Sheridan’s Cheesemongers.

While they also build strong partnerships with local hotels and restaurants Knockdrinna have also made inroads further afield.

“We’ve been supplying into the UK for the past three years and that market is continuing to grow fairly steadily thanks to our success at the British Cheese Awards. More recently we’re sending product to the US and we would love to crack Asia – there’s a huge demand there for quality dairy at the moment,” said Durkin.

Exporting dairy is an area the company feels could grow rapidly over the next few years especially with support from the Irish Government. According to Durkin: “There’s great potential to grow Irish Cheese exports, but it can sometimes be difficult to compete on pricing when you’re up against producers in countries such as Holland where they receive cheese subsidies. Holland has a very successful model that we could learn a lot from.”

Recently the company has become more active on social media; a move Durkin has been well worthwhile.

“We became a lot more hands on with social media platforms such as Twitter and Facebook this year and are reaping the benefits in terms of the engagement we have with our customers and the exposure we’ve gained just from having an interactive online presence. We’ve linked this activity directly to an increase in sales through 2013 and would recommend any business not already using social media to get onboard asap.”

Although an online presence is very important to Knockdrinna, the company still feels that face-to-face meetings with consumers and like-minded producers are imperative for its success.

When asked about events such as Bloom, Durkin states: “Local and national events are really important for networking, developing new business and sharing ideas and innovations with other producers. Next up for us is the Savour Kilkenny Food Festival next weekend, where we’ll be launching our new Organic, Craft Beer Cheese.”

In addition to travelling around the country attending events the company are looking forward to launching a new range.

“We’re just about to launch our latest addition to the range – a semi-soft cows cheese made from Organic Milk from the Little Milk Company and rindwashed with O’Hara’s Craft Beer. We’ve done a lot of collaborating with other producers this year and it’s been both inspiring and rewarding.”