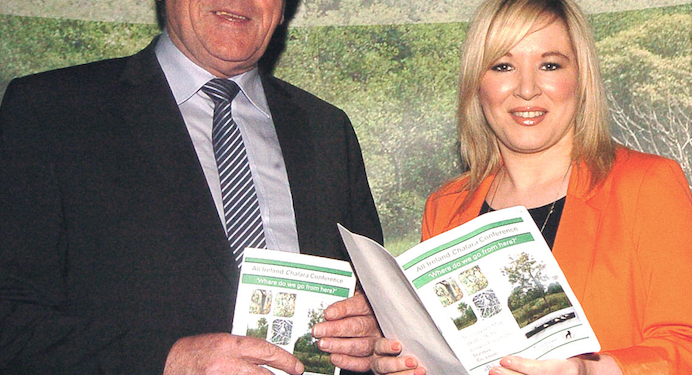 Ministers Tom Hayes and Michelle O'Neill at the conference in Dundalk.

The importance of continued co-operation in tackling plant disease throughout Ireland was highlighted at the Chalara conference in Dundalk today by the Minister of State at the Department of Agriculture, Food and the Marine Tom Hayes and Northern Ireland Minister for Agriculture and Rural Development Michelle O’Neill.

The two Ministers were speaking at the All-Ireland Chalara ash dieback Conference in Dundalk, where they informed delegates that findings of the disease throughout the island of Ireland have been limited mainly to recently imported material.

Speaking at the conference Minister Hayes said “Since Chalara was first identified North and South in late 2012 we have sought to coordinate our efforts and share our experience in order to bring about the best possible outcome. This approach culminated in the launch of the All Ireland Chalara Control Strategy in July 2013. We continue to implement this strategy and see it as an important contributor in addressing the threat posed by Chalara on the island of Ireland.”

Minister Hayes gave an up to date position on the number of occurrences of the disease in the South where he said that there were a total of 120 confirmed findings of the disease located throughout the country. Of these, 47 are located in forests, with the remainder 73 at non-forest locations. Minister Hayes said that it was vital that all stakeholders come together “to explore and develop ways of minimising both the economic and environmental impacts of this disease in Ireland and Great Britain. As a native species, ash has important heritage and ecological values and it is incumbent on us all to protect this species as best we can.”