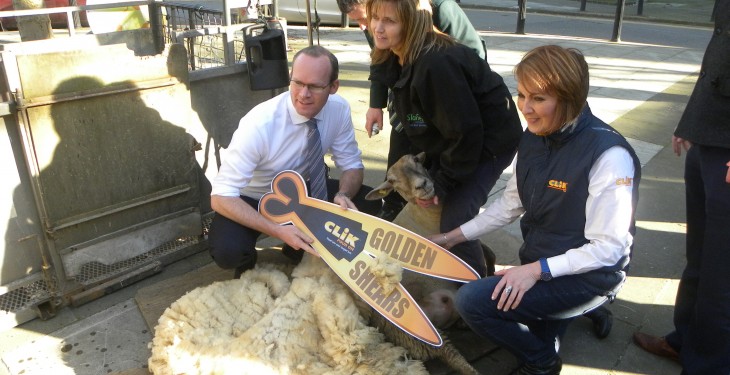 The Golden Shears World Sheep Shearing & Wool Handling Championships takes place in 14 days time in Gorey, Co. Wexford from May 17 to May 25.

Billed as the ‘Olympics of Sheep Shearing’ this world event, previously hosted by Ireland in 1998, will attract over 40,000 spectators to watch the top names from over 30 countries, including New Zealand, South Africa, Australia, Canada, the US, Norway, Sweden, Germany and the UK compete for the coveted Golden Shears Title.

Irish Country Meats (ICM) and Slaney Foods International, the Wexford based beef and sheepmeat processors have proudly taken the lead sponsorship role for this prestigious competition.

For the first time ever, a team from China (Ireland’s biggest wool importer) and Russia will make their debut in Ireland. Current world champion, Gavin Mutch from Scotland, will be out to defend his title, while the current world record holder and captain of the Irish team, Ivan Scott from Co Donegal, will be a firm favourite for the top spot.

As well as international shearing events, the Irish Country Meats/FBD Young Shepherd Competition will take place on Saturday, May 24, with the top two contestants going forward to represent Ireland in the European final taking place in France later this year.

The Irish Country Meats Sheep Shearing Dome will be specially constructed on site and seat up to 1,200 people. Commenting on the event, Joe Hyland Managing Director of Irish Country Meats stated that ‘We are proud to be associated with the Golden Shears World Sheep Shearing and Wool Handling Championships as lead sponsor. We salute the enterprise and endeavour of the host organising committee in securing a world competitive event for the South East and town of Gorey.

“Golden Shears affords us a ‘golden’ opportunity to showcase Ireland’s rich agricultural heritage and also promote modern farming methods. As Ireland’s largest sheepmeat processor, the ICM specialist business model is underpinned by the support and goodwill of our farmer suppliers, we are therefore pleased to be in a position to financially support the staging of a world sheep competitive event in our region.”