It was new territory for the society auction, with the ILCS decision to host this year’s premier sale at Elphin Mart, rather than the more familiar sale rings of Roscrea Mart.

Going by Saturday’s sale, the move did not have a negative impact on the trade – with some strong prices recorded for bulls in what was a strange atmosphere due to no customers being allowed to bid at ringside.

Looking at the figures, approximately 52 bulls out of the 92 catalogued turned up for the sale – which ultimately helped the auction prices. A strong average of €4,243 was recorded, up by €277 from the March premier sale held in 2019.

A total clearance rate of 72% was also achieved on Saturday.

Claiming the top price of €14,000 on Saturday was the Co. Cavan-bred Aughalion Prince (et) exhibited by Paddy Clerkin of Ballyjamesduff. 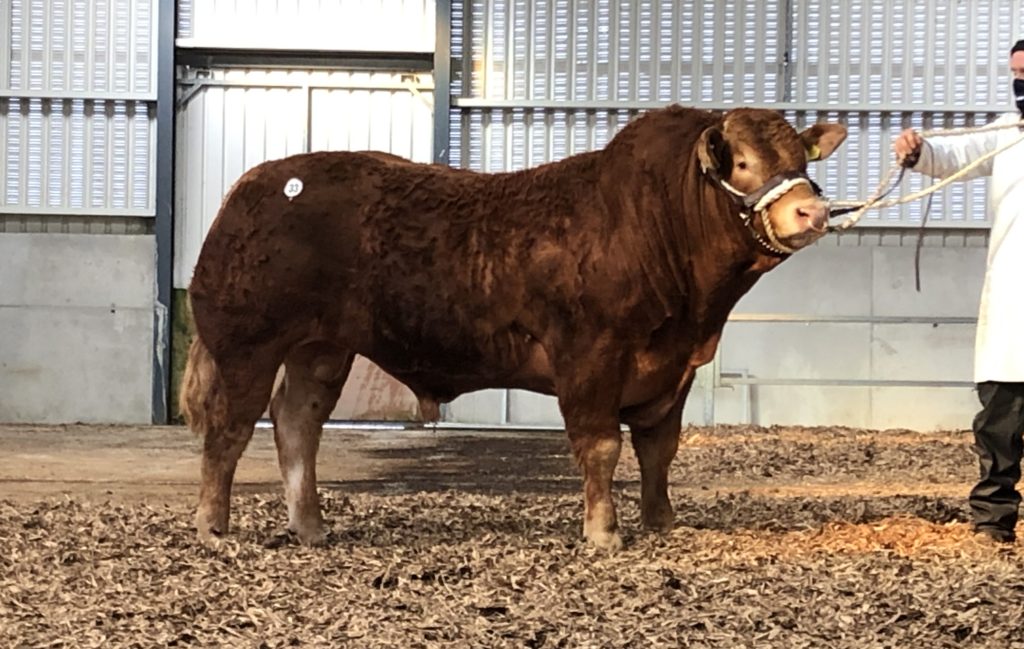 This embryo-born bull is Telfers Munster’s son and out of the well-known dam Whitehall Iris. Being a pre-sale favourite, Prince boasted a staggering value of €204 on the terminal index, along with €141 on the replacement index. This bull was secured by the Haltcliffe Limousin herd based in the UK. 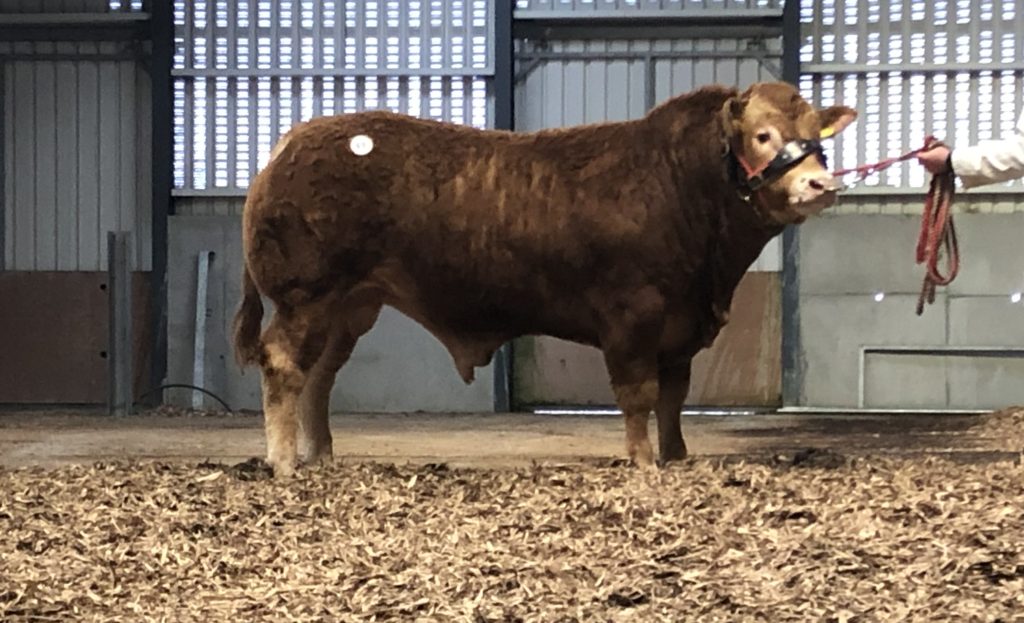 The second highest price of €7,200 was achieved by Milbrook Promoter – shown by William Smith from Oldcastle in Co. Meath. This October 2019-born was sired by Mereside Godolphin and out of home-bred dam, Milbrook Lepetal. Again, the terminal index was strong for this young bull, as he was awarded a value of €161. He was knocked down to a farmer from Northern Ireland.

His stablemate, Milbrook Priority (et), also sold for one of the top prices on the day, at €5,000. Priority’s dam, Milbrook Ester, was one of the Milbrook herd’s most successful breeding cows.

This 18-month-old Lodge Hamlet son has a calving ease value of +3.4% on matings with beef cows, and also headed to a farmer in Northern Ireland after the sale.

Being one of the first bulls into the sales ring on Saturday did not stop Templequain Perry selling for the third highest price of €7,050. 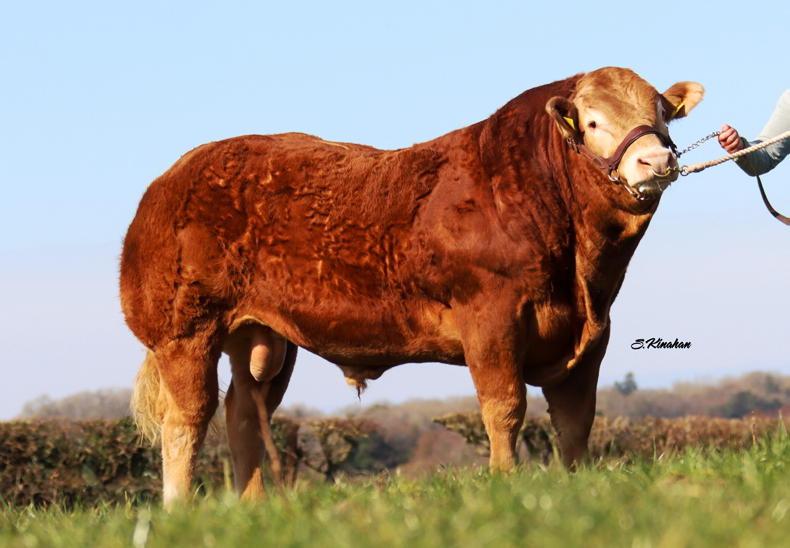 A son of the popular Derrygullinane Kingbull, he was shown by Thomas O’Shea from Rathdowney in Co. Laois. He was also out of a home-bred dam sired by Loosebeare Fantastic. Perry followed a number of bulls in heading to a new home in Northern Ireland after the sale.

Another Derrygullinane Kingbull son, Ernevalley Phenomenal (et), sold for the next highest price of €6,400. Eddie Lynch from Loughduff in Co. Cavan was the exhibitor this time. Sires such as Wilodge Cerberus and Mas Du Clo could be found in this bull’s maternal back pedigree. This December 2019-born bull will now graze new pastures in Co. Wexford.

Overall, the Ernevalley herd sold five bulls on Saturday, for a respectable average of €4,380/head. 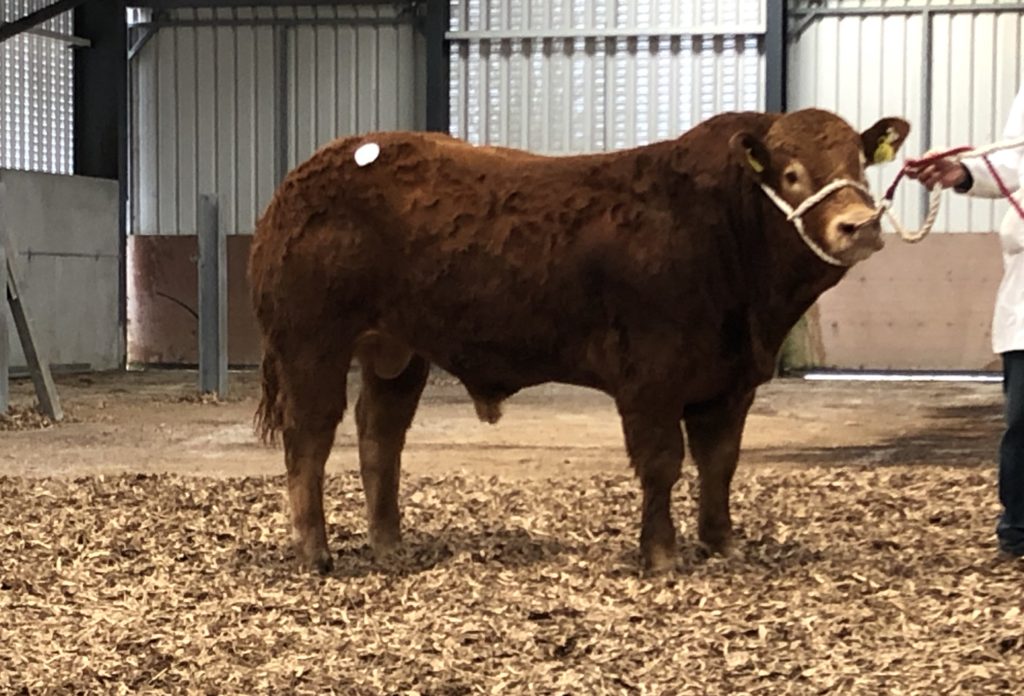 Gerry Shaughnessy from Gort in Co. Galway secured €5,200 for his bull, Derra Perfect. The sire this time was Lodge Hamlet and out of a home-bred dam sired by Ampertaine Elgin. Carrying one copy of both the NT821 and F94L myostatin gene, Perfect was also awarded a terminal index of €140. This bull was purchased by a customer from Wales.