Cattle lorry gets stuck in narrow Castlebar side street

This morning, we saw a tractor on a motorway; this evening we have a cattle lorry in the middle of a town.

The lorry is question got into difficulty in the centre of Castlebar while attempting to turn on to Ellison Street – a busy one-way main street – from a much narrower side street, as seen in a video by The Connaught Telegraph which appeared on Facebook.

“A cattle truck got stuck at Ellison Street in Castlebar, leading to some traffic congestion. It subsequently proceeded down Castle Street, turning towards Barrack Bridge,” explained The Connaught Telegraph’s Facebook post.

This is not the first agriculture-related traffic incident today.

Earlier today, a tractor was pulled over on a motorway by Gardai for failing to reach the minimum allowed speed.

The tractor, which appeared from images to have been a John Deere, was pulled off the M18 motorway in Co. Clare by members of the Gardai’s Road Policing Unit.

The tractor was only capable of speeds of 35kph according to Gardai; however, the minimum speed a vehicle must reach and maintain for motorway driving is 50kph.

According to Gardai, the driver of the tractor was trying to take a short cut between areas of land.

“Lads, you can’t be doing that. Tractor stopped on the motorway (tractor only able to do 35kph). Driver was taking a shortcut between farms,” said the Gardai on Twitter. 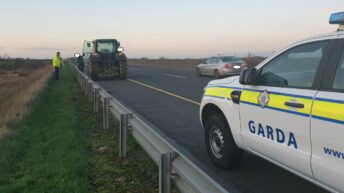 Tractor pulled off motorway for not going fast enough