The number of cattle slaughtered in October 2015 was 12.2% lower than in October 2014, according to latest figures from the Central Statistics Office (CSO).

This is 19,900 head less than the number of cattle slaughtered in October 2014, the figures show.

As of October 2015, CSO figures show that 1.384m head have been slaughtered at Irish plants this year.

From January to October 2015 compared to the corresponding period last year, there’s been a 5.3% drop in cattle slaughterings.

Pig slaughterings continue to remain ahead on last year’s figures with a 1.2% increase in October 2015 compared to October 2014.

Comparing January to October this year there’s been a 6.1% increase in the number of pigs slaughtered compared to the corresponding period last year. 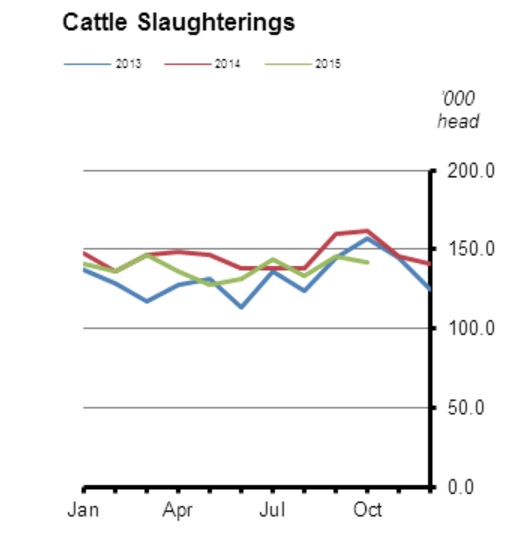 It is critical that farmers deliver livestock as clean as possible for slaughter and this policy needs to be properly enforced across processing plants, according to Meat Industry Ireland (MII).

According to MII, this is a critical area that needs to be highlighted as failing to deliver clean livestock to slaughter plants could have a negative impact on the entire production and processing sector.

It says that its members are concerned with the hide condition of some livestock presented to slaughter plants as this causes a major challenge to the hygienic dressing of carcasses.

There are food safety risks associated with cross-contamination from dirty hides during the carcass dressing process, it says.