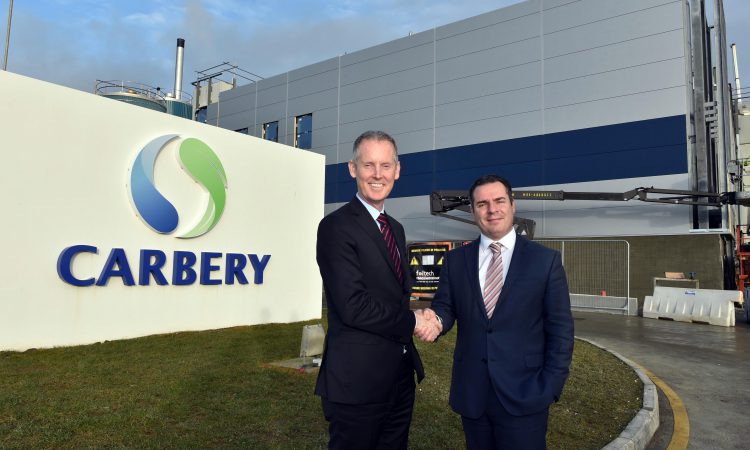 The European Investment Bank (EIB) has agreed to provide a €35 million loan to enable the expansion and diversification of the Ballineen facilities of Carbery Group, the west Cork dairy processor has confirmed.

This is the first ever EIB financing for Carbery Group and will support the construction of a new €78 million manufacturing plant at Ballineen, according to the group.

The plant will enable the company to diversify its range of cheeses and produce mozzarella for export to a range of international markets.

The 12-year EIB loan to Carbery Group was formally agreed during a visit to the company’s west Cork headquarters in Ballineen by Andrew McDowell, vice president of the European Investment Bank, responsible for agriculture and lending operations in Ireland.

McDowell commented on the announcement, stating: “Ireland is home to world-class agriculture and food.

“The European Investment Bank is pleased to support new strategic investment by Carbery that demonstrates clear vision and resolve to continued international growth whilst addressing uncertainties related to Brexit.

“It has been a privilege to visit Ballineen to formally sign the new €35 million EIB loan and see at first-hand how this financing will transform Carbery’s headquarters.

This long-term loan represents the first direct EIB support for investment in the Irish cooperative sector in 45 years and the first Irish investment under the EIB’s dedicated streamlined agriculture financing programme.

“Together with Carbery’s Irish banking partners, the EIB is committed to supporting transformational investment in Irish agriculture and food that strengthens rural communities,” the vice-president concluded.

“The €35 million EIB backing, together with continued funding support from our other banking partners AIB, BOI, and Rabobank, will accelerate growth for Carbery and secure new markets for Irish dairy farmers.

“That Carbery has secured the first ever European Investment Bank financing for an Irish Agri Foods business is a vote of confidence in Carbery and Irish agriculture.”

The agriculture and bioeconomy financing programme is guaranteed by the European Fund for Strategic Investments.