The board of Carbery Group has decided to hold its milk price for June, a representative for the group has confirmed.

“Carbery Group will continue to monitor the weaker than expected European dairy markets as we move forward,” the spokesperson told AgriLand.

In other Carbery news, it has been revealed that TJ Sullivan, chairman of Drinagh Co-op, will succeed Peter Fleming as group chairman.

In addition, Paddy Ryan, chairman of Lisavaird Co-op, has been appointed vice-chair of the organisation.

Sullivan joined the Drinagh Board in 2014, becoming vice-chairman in 2016, at which time he also joined the Carbery board; the incoming appointee has been the chairman of Drinagh since 2017.

A dairy farmer from Urhan on the Beara Peninsula in west Cork, Sullivan commented on his appointment, stating:

I am honoured to be appointed chairman of Carbery Group, which is such an important business for the dairy farmers of West Cork.

“I am looking forward to working with my fellow board members and the management team, as we continue to diversify and grow the company, for the benefit of our milk suppliers and shareholders,” he added. 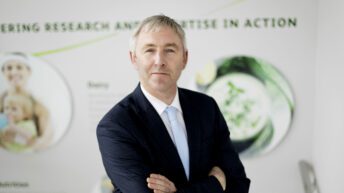