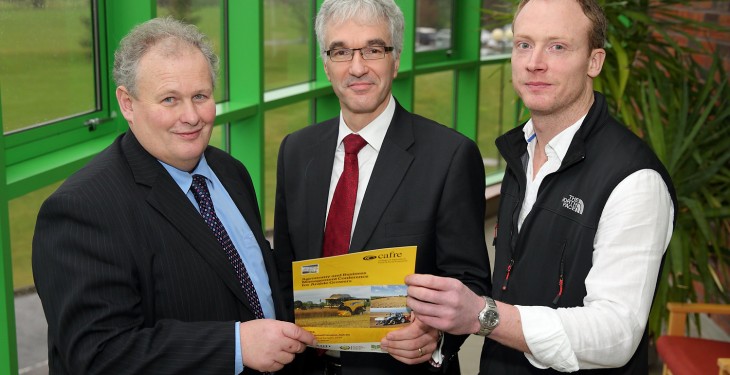 The reform of the Common Agriculture Policy (CAP) topped the agenda at the ‘Agronomy and Business Management Conference’ this week. The conference aimed at arable growers was organised by the Ulster Arable Society, Ulster Farmers’ Union (UFU) and the College of Agriculture, Food and Rural Enterprise (CAFRE).

John Best, chairman of the UFU Seeds and Cereals Committee, said: “There was a large turnout for the conference and this is evidence that CAP Reform is a very important issue for arable farmers. The event was very timely, giving many cereal producers the opportunity to seek clarity on CAP issues. Also it stimulated healthy discussion in relation to the necessity of sharing accurate, timely and concise information to allow planning for a positive future.”

Robert Moore, chairman of the Ulster Arable Society noted: “This year’s Arable Conference was once again very well attended. Arable producers are currently very concerned about the effects that the new CAP will have on their businesses. An excellent line up of speakers examined the different aspects of the reforms, offering advice on how best to react to them and hopefully delegates went home better informed to allow them to plan ahead for the future development of those businesses.”

Among the speakers were Norman Fulton from the Department of Agriculture and Rural Development who outlined the current decisions finalised for the future CAP. On the back of Fulton’s presentation, David Swales from HGCA discussed the impact of the CAP Reform on the economics of European and UK arable farming.

James Wray, a local farmer from Limavady, presented a paper from a farmer’s perspective on the requirements of the new CAP.  He highlighted that greening, ecological focus areas and land tenure will be significant issues for farmers to get their heads around going forward. In the afternoon session.

Phil Jarvis from the GW Conservation Trust gave farmers food for thought in terms of integrating environmental responsibilities into a profitable farming enterprise.  Rotations will be important within the new CAP and Dermot Forristal from Teagasc gave an over view of suitable rotations and the benefits best practice delivering improvements in soil fertility and structure.

Robin Bolton from CAFRE presented information regarding new EU legislation on the Sustainable Use Directive and highlighted the impending changes for certificate for use come into effect from the 26 November 2015.

Eric Long from CAFRE concluded: “The resounding success of the second joint arable conference reflects the collaborative efforts of CAFRE, the UAS and the UFU to provide a programme that was well matched to the needs of the local arable crops industry. I would like to extend sincere thanks to the large number of attendees from across the entire industry for their strong support, which is greatly appreciated.”