Callan Macra na Feirme will celebrate its 70th anniversary in the Springhill Court Hotel, Kilkenny, on Saturday, August 26. Entertainment will be by White Diamonds – while Joe Healy, former Macra President, and current IFA President, will be special guest at the event.

Founded on March 15, 1947, Callan Macra is a standout star for its strong membership. “With nearly 90 members, we are one of the largest Macra clubs in the country,” said Josephine O’Neill, vice-chairperson.

The club is also unusual in owning its own premises. “Many of the early meetings of the club were held in the local Christian Brothers School, an ideal location – as one of the original cornerstones of the club was education.

“To quote a past member of the club whom we met recently, as we researched the history of the club, ‘Macra was the farmers’ university’.

At times, the school was unavailable, so meetings were held in the parish hall or even under a street lamp. This was deemed unsustainable, and the club began to investigate the purchase of a premises.

“In 1959, a member of the club, David Gordon, proposed the purchase of the local Church of Ireland school. The school, located on Mill Street in Callan, was bought for £200,” O’Neill said.

“Although in disrepair, the club worked to renovate the building allowing for club functions to be organised much more easily. At the time of the purchase, Tom Ryan was chairperson, and Jack Lynch was treasurer.”

The hall was again renovated in the 1980s. The club raised £8,000, this time adding a kitchenette.

“The hall continues to be central to our club, with meetings, carol singing,  drama practice and debating taking place there on a regular basis,” said O’Neill.

“As part of our 70th anniversary celebrations, the club is holding a major raffle to fundraise, with all money raised being used to again renovate the hall to ensure that it remains at the heart of our club long into the future.

“We are one of the very few Macra clubs in the country with their own premises, which gives us a strong sense of identity within the community,” said O’Neill.

While the current committee hasn’t been able to pinpoint the exact number of original members, it has identified the original officers. James Luttrell was the first chairperson; James O’Neill was vice-chairperson; Nicholas Murphy was secretary; and John Roughan was treasurer. 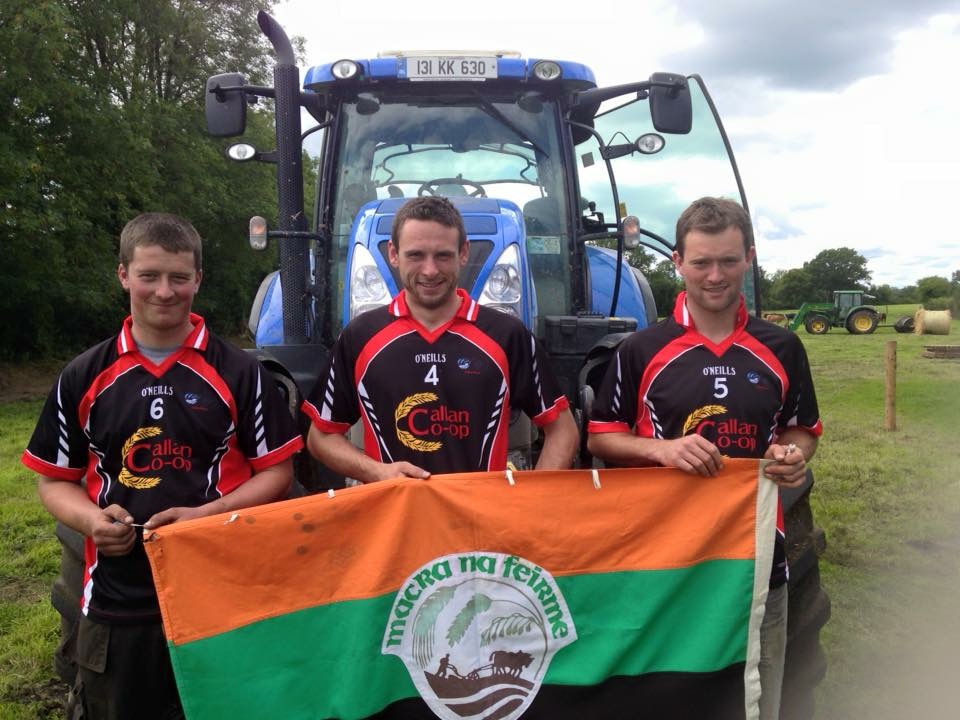 While the club has never been dormant, it has experienced lulls. “However, currently we are going from strength to strength,” O’Neill said.

“The club is hugely active, competing in nearly all of the Macra competitions. In recent years, the club has won back-to-back All-Ireland volleyball titles (2015 and 2016), and hurling All-Ireland titles (2016 and 2017.)

“Perhaps the cherry on top has been coming third in the Club of The Year Competition at the 2015 Rally,” said O’Neill.

“The club is diverse, taking part in a wide variety of Macra competitions. These include: sports; public speaking; debating; agriculture-based competitions such as ‘Know Your Ag’; and drama.”

Strong links have bee forged with the local community. “Every year, we organise carol singing outside the local supermarket to raise funds for local charities and last Christmas we visited a local nursing home to entertain the residents with our carols,” said O’Neill.

Macra marriages are common, and Callan can boast of several. Many members are ‘Macra babies’ as one or both parents were previously members of  the club.

“As a result, many of the same names and families are involved in the club and lots of members are related,” said O’Neill.

Kevin Croke is the current chairperson, Christine O’Neill is secretary, Aoife Power is treasurer and Niamh Bambrick is PRO.

Future plans include: completing the hall upgrade; continuing to grow the membership base to constantly bring new, young and vibrant members into the club; and continuing to improve competition involvement.

O’Neill and fellow club member, Colm Lyons recently visited an original member of the club, David Gordon, who played a key role in purchasing the hall and who has just celebrated his 90th birthday. “He recalled cycling around Kilkenny to attend stock judging competitions,” said O’Neill.

“We are still in the process of trying to trace other original members. We are working with past member and local historian, Philip Lynch, to learn more about our club and its members.”

'The Farmer Wants a Wife' turns the tables