Cathal Moran took the reins of his family’s 57ha farm in Curraghlane, Skeaghvasteen, Co. Kilkenny in 1997.

Prior to this, his parents Edward and Anne were running a mixed farm consisting of beef, sheep, tillage and dairy enterprises. Their dairy herd consisted of 16 cows and was limited to a quota of just 60,000L.

Over the years, Moran has overseen major changes to the business; he has increased the size of the herd to 258 cows – a 16-fold increase – and plans to move to 360 cows by 2019.

What makes Moran’s story even more impressive is the fact that the majority of this expansion has been carried out on leased land.

Of the 144ha currently farmed, just 57ha are owned. In addition, 63ha of the 120ha milking platform are leased from three separate landowners. 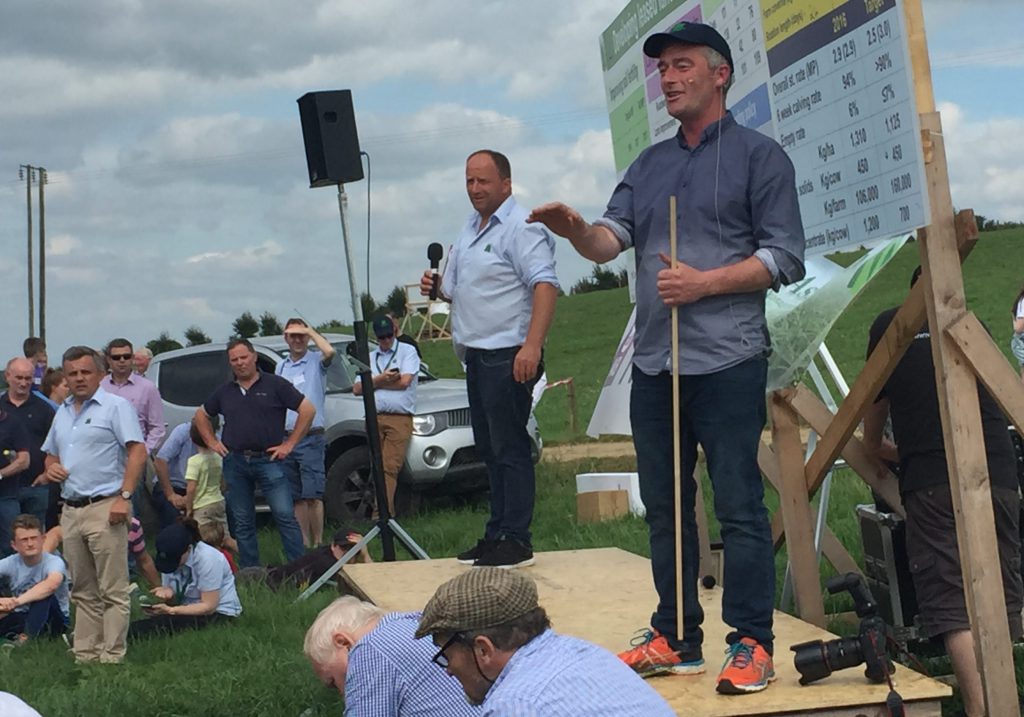 After taking control of the farm in 1997, Moran focused all his efforts on developing a “profitable and simple dairy system”.

“The whole thing at the start was to try and get more cows onto the farm and move away from the other enterprises. To achieve this, we bought quota in every year bar two.”

Since beginning his dairy farming career, the Kilkenny-based farmer has spent €258,000 on quota.

With a plan firmly in place, the beef, tillage and sheep enterprises were sidelined and Moran started developing the farm to handle 120 dairy cows.

Moran explained that an opportunity to lease 8ha in 1997 started the ball rolling in terms of using leased land to grow his dairy business.

This land was brought into the system to facilitate his parents retirement from farming. At the time, it was not adjacent to the milking platform and was originally used for grazing and rearing replacement heifers.

By 2006, he was milking a herd of 51 cows after growing his herd organically by keeping homebred replacements.

However, he effectively doubled numbers between 2009 and 2010 after purchasing 80 cows.

The abolition of milk quota in 2015 and the availability of another 20ha on long-term lease gave the Kilkenny-based farmer a further opportunity to expand his business.

Cow numbers increased to 190 in 2015; further additions to the herd since then has seen the herd grow to 258 cows. 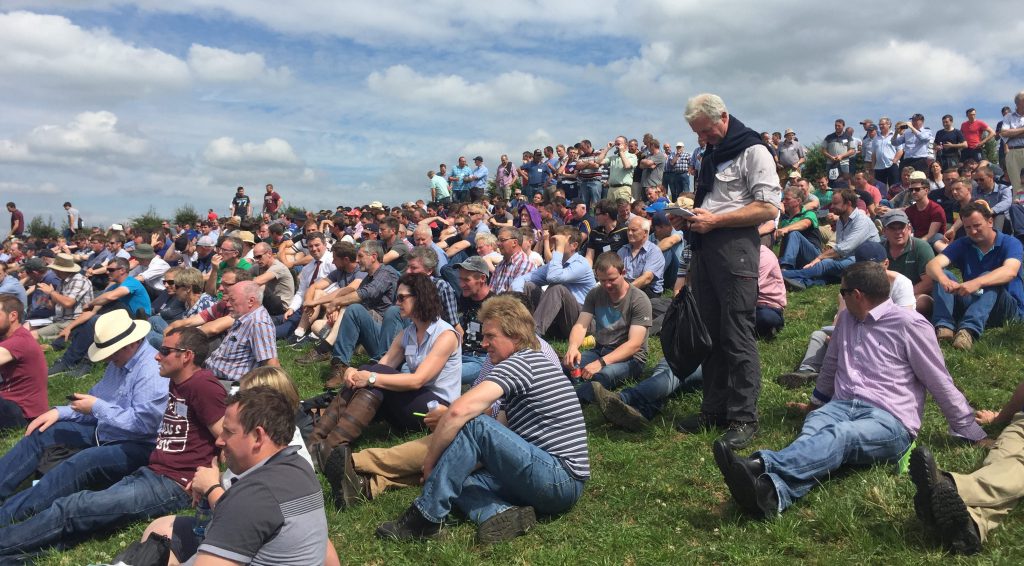 Moran told the crowd in attendance at the AIB-sponsored event that the relationship between the landowner and the lessor is critical for the success of any dairy enterprise looking to expand through the use of leased land.

As is stands, Moran is leasing part of his milking platform from three separate landowners and ensuring it performs to its utmost potential is critical for the success of his business.

Leases on the land range from seven up to 15 years; but Moran is after coming to the conclusion that the lease needs to be at least 10 years – or even 15 years – to make it worth his while taking the ground. 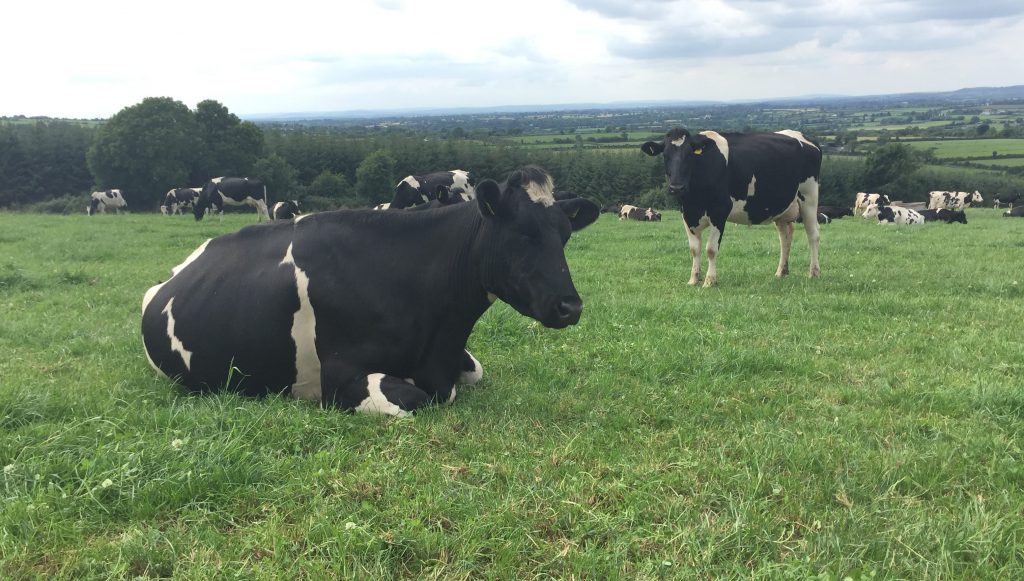 This comes as he invests heavily in developing the land to maximise its use as a grazing platform. Roughly, he has spent €2,125/ha on each hectare leased.

In his opinion, longer-term leases affords him the opportunity to spread the cost of this investment over a sustainable time frame. This is illustrated in the below table:

The Kilkenny-based farmer added that he “condition scores” any potential ground before bringing it into his system.

As part of this process, he identifies the weakest links first – such as drainage or soil fertility issues – and rectifies these problems.

“Finding the weakest link first and fixing it gives the fastest results. Addressing a soil fertility or drainage issue can give instant results,” he said.

In addition, every hectare brought into the system is mapped and soil tested. This process ensures that Moran can maximise the productivity from leased ground.

The quality of grass is also assessed and from this assessment, decisions are made on whether to reseed or address a weed problem.

And, given that 60% of the land brought into the system in recent years had been in tillage, the level of investment on reseeding has been quite high.

Originally, Moran had planned to milk 120 cows and, as a result, the facilities on the farm were geared to handle such a herd.

Therefore, investments on the farm can be split into three distinct periods. Between 1997 and 2009, Moran spent €233,000 on improving and developing the milking facilities on his farm. Investments included the construction of a six-unit parlour, cubicle housing and a slurry lagoon.

As the years progressed and abolition of quotas became a reality, Moran decided to once again invest in his facilities – particularly accommodation and milking facilities.

This brings the total investment made on milking facilities and cow accommodation to over €1.05 million over the past 20 years. 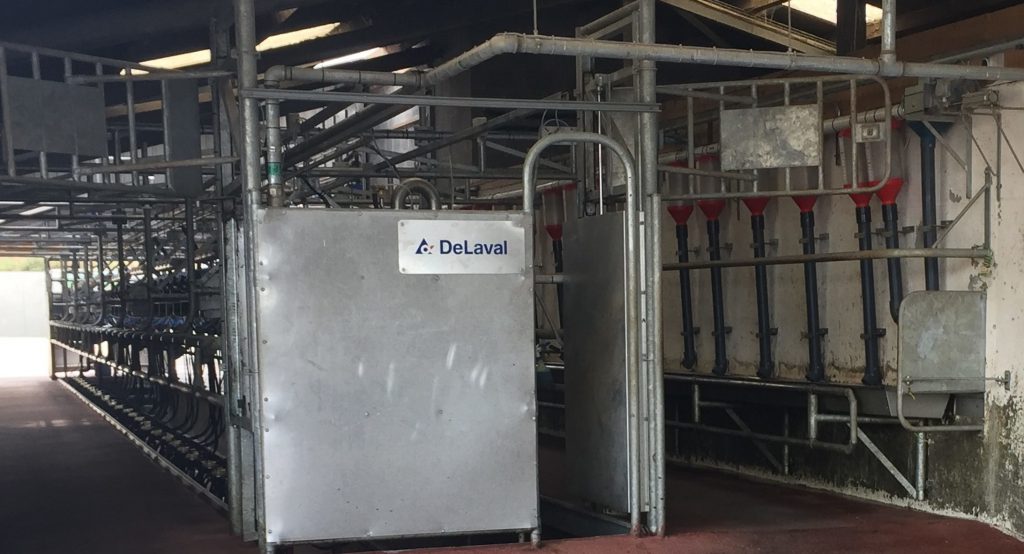 This figure excludes any monies invested on leasing or developing leased ground over this period. 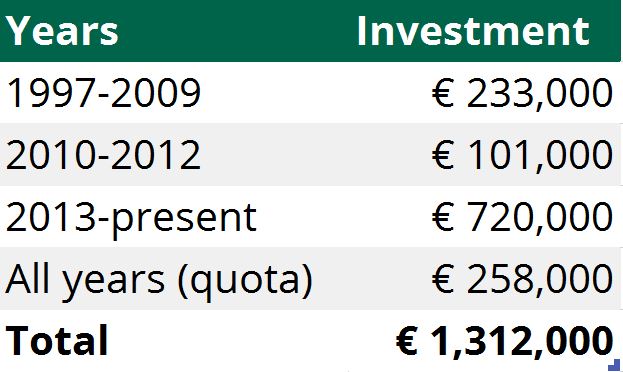 Grass – the backbone of Moran’s business

Despite the large scale investment, one thing has remained clear – grazed grass is the backbone of Moran’s dairy business.

Because of his high overall stocking rate, Moran is reliant on out farms for the majority of his silage. These blocks are grazed early and late in the year by replacement heifers and two cuts of silage are taken during the summer.

The farm is also located in a low rainfall area – averaging 1,008mm for the past six years – and is prone to prolonged dry spells in the summer months; these conditions can reduce growth rates considerably. 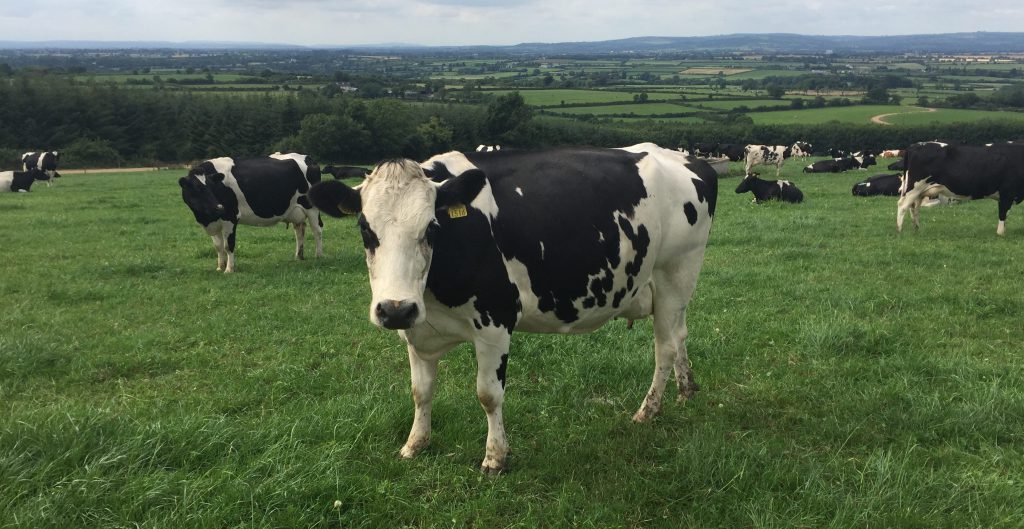 This improvement has been achieved through a focus on improving the soil fertility levels on his farm and soil testing is practiced every year. Between 2014 and 2016, 1,800t of lime were applied on the farm to bring 90% of the milking platform to a pH >6.

Moran said: “pH is the quickest and easiest thing to solve.”

Nitrogen (N) is applied after every grazing to the limits set out under nitrates. Moran spreads the equivalent of 100 units of N per acre in the form of fertiliser N and slurry.

Moran explained that he aims to have the first calf on the ground by February 1 – that’s 60 days before magic day strikes on the farm.

The spring target average farm cover (AFC) is 500kg/ha on April 5. This spring was the exception to the rule and the AFC stood at 850kg/ha in early April. This allowed Moran to save 14ha of surplus grass as silage between April 10 and May 10.

The rotation length during the main grazing season was also discussed and this ranges from 18 days up to a maximum of 28 days. Typically, the Kilkenny-based farmer aims to graze the paddocks on his farm at a cover of 1,400-1,500kg/ha.

The autumn target is a peak AFC of 1,250kg/ha in late September. A closing cover of 650kg/ha is normally targeted; this rises to approximately 950kg/ha at turnout in early February.

As it stands, Moran milks a herd of 258 black and white cows. Originally starting from a British Friesian base, Moran introduced Montbeliarde genetics to the herd between 1998 and 2000.

Moran focuses particularly on bulls that will supply future generations of cows with good fertility and milk solids production traits.

This spring the average EBI of the Holstein Friesian bulls used was €256. Sub-indices stood at €101 for milk, €109 for fertility and +32.5kg for milk solids.

The calving interval in 2016 was 371 days and the median calving date was February 20. An empty rate of less than 7% from a 12-week breeding season (six weeks dairy AI, six weeks beef AI and three weeks stock bulls) was recorded. 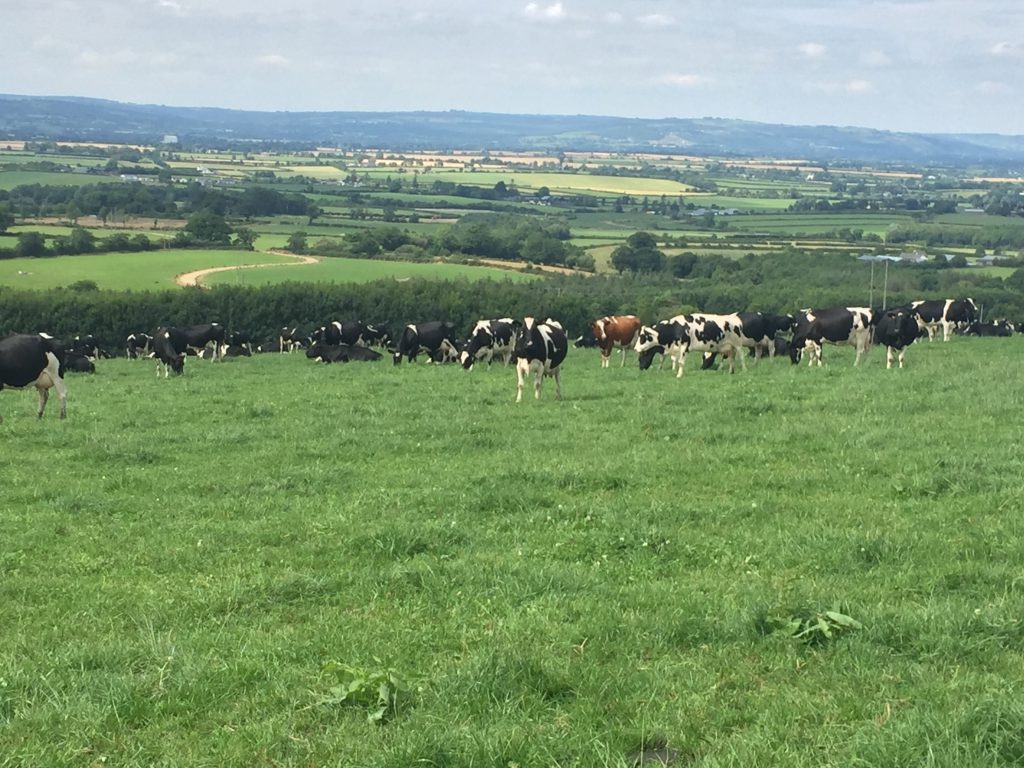 This spring, the Kilkenny-based farmer submitted over 90% of the dairy cows in the first three weeks of breeding and 100% of heifers in 11 days (one shot of prostaglandin administered to unbred heifers on day eight).

All of these dairy heifers have been reared on the home farm in recent years; but, as cow numbers grow further, Moran is considering the possibility of using a contract rearer.

This level of production was achieved from a concentrate input of 1,200kg/cow grazed at a stocking rate of 2.9 cows per hectare.

Ideally, Moran would like to keep the concentrate input to around 700kg and to achieve this he has decided to lower the milking platform stocking rate to 2.6 cows per hectare this year.

On profitability, a net profit of €857/ha or €294/cow was generated by the business in 2016. This left the Kilkenny-based farmer with a net profit of 5.38c/L for every litre of milk sold off the farm last year.

In this instance, the net profit is the margin remaining after fixed and variable costs have been deducted to pay principle repayments and taxation.

Basic Payments were not included in this figure and it was also calculated using an own labour charge of 2.31c/L.