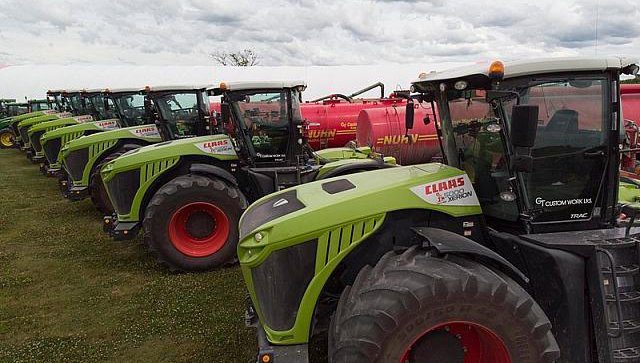 In a particularly noteworthy deal, Canadian Claas dealer Bosse & Frere (based in Quebec) has delivered a fleet of seven Xerion 5000 tractors to a company known as GT Custom Work.

GT Custom Work will use its new fleet of Xerions to haul slurry tankers; the tankers are from Canadian manufacturer Nuhn Industries (based in Ontario).

Among its most notable products is the ‘Quad-Steer articulating tank’. This rig, with a capacity of 10,000-16,000 gallons (US), is effectively a slurry tanker ‘road-train’.

Also Read: Hooking up a slurry ‘road-train’: When one tanker just isn’t enough

The tanker rig incorporates electronically-steered axles. Four of the six axles – the front and rear axles on both tanker units – can steer; hence the ‘Quad-Steer’ designation in the name. This ‘active’ or ‘forced’ steering system also works in reverse.

The Xerions bought by GT Custom Work will be busy hauling an equal number of Quad-Steer articulating tanks. Its newly-acquired double-barrelled tankers reportedly each have a capacity of 15,000 gallons (US).

Each outfit (the tractor and tanker combined) is carried on eight axles (two bearing the tractor’s weight and six slung underneath each tanker ‘road-train’). Overall length, for each outfit, is 28m.

Who or what is Nuhn Industries?

Nuhn Industries’ origins can be traced back to 1902, when founder Simon Nuhn opened a blacksmith shop in Wartburg, Ontario. Since then, much has changed – with the business having grown significantly in the interim.

In 1965, a later member of the family – Dennis Nuhn – made the outfit’s first slurry spreader. It was fabricated from an old gas tank; the tyres came off an airplane. 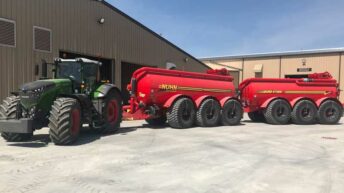 Hooking up a slurry ‘road-train’: When one tanker just isn’t enough