Calf barrow designed to do the lifting and carrying of calves 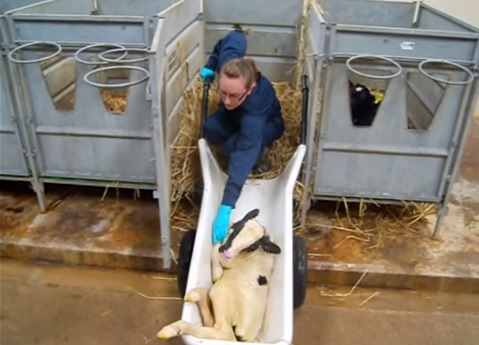 The calf barrow is not a new invention, it was originally on show at the 2013 National Ploughing Championships, but it’s still around today and popular on many farms.

Thomas Kenny, the creator, had his invention of a calf barrow on show at the 2013 and 2014 National Ploughing Championships and designed it to allow easier transport of freshly born calves and small animals, as it allows the animal to be pulled from the ground straight into the barrow ready for transport.

He also says that with the insertion of a blanking plate it can be used for transporting loose materials.

As you can see in the video below, the invention takes the lifting and carrying of calves off the farmer.

The video shows that the calf barrow allows calves to be easily transported, while feed and other farm materials can be transported with minimal stress on the farmer.

Kenny has also planned to patent the calf barrow.

The calf barrow retails for €250 on donedeal.ie