Buyer’s guide: What you should look out for in a used JCB Fastrac 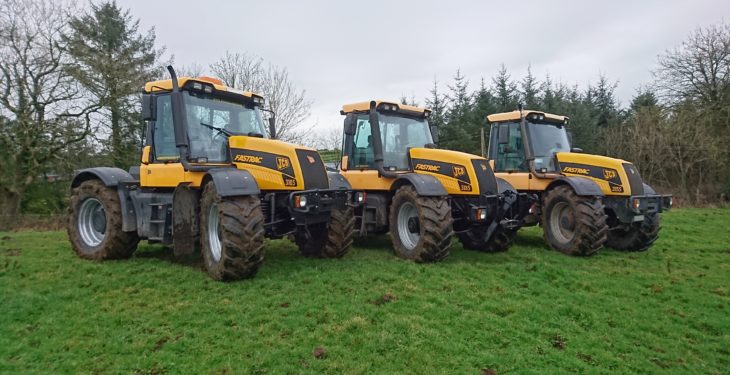 The JCB Fastrac was launched at the Royal Smithfield show in 1990.

Although no stranger to agriculture, having originally started out making tipping trailers in the 1940s, Joseph Cyril Bamford made his name manufacturing hydraulic backhoe loaders through the 1950s and 1960s.

In the mid 1980s, while on holiday, Joseph’s son Anthony came up with the idea of building a high-speed agricultural tractor. 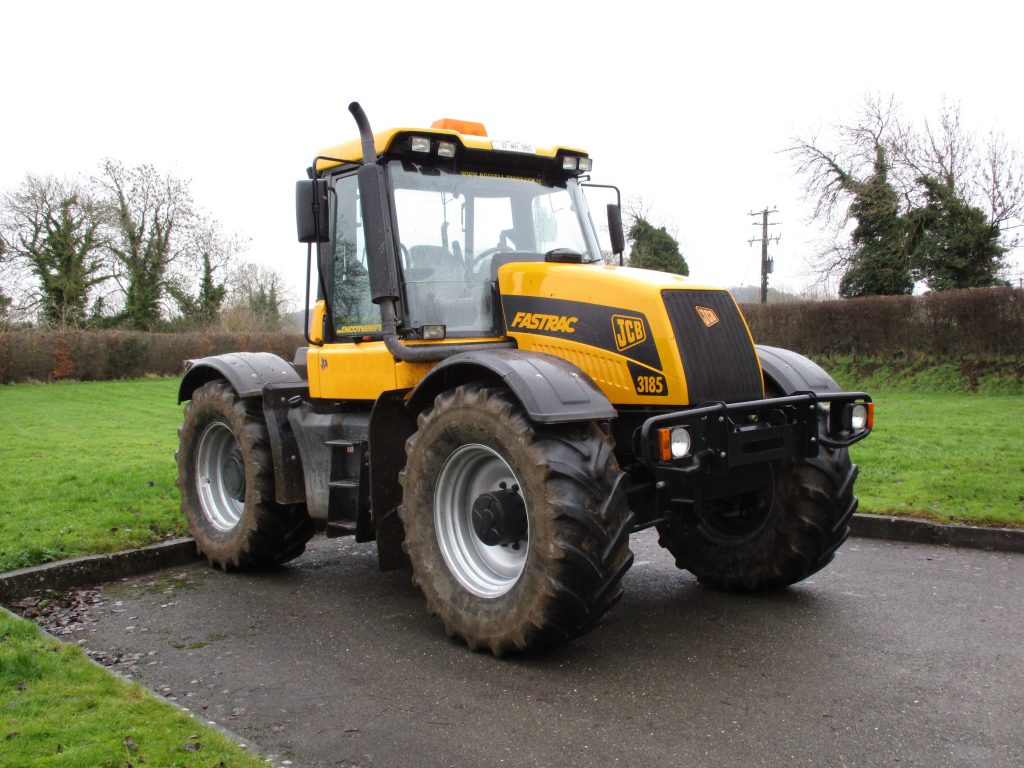 Extensive R&D was conducted; over £12 million was spent on the development phase of the Fastrac project, with the resulting tractors reaching the market in 1991.

Based around a sturdy ladder chassis, the main difference between the Fastrac and other tractors is that they were designed from the offset to have all-round suspension. Certain models were even capable of up to 80kph on the road.

With equal-sized wheels and a large, mid-mounted cab, the Fastrac was a departure from typical tractor design. The front axle was suspended on coil springs, with hydro-pneumatic, self-levelling rear-axle suspension. External dry disc brakes acted on all wheels. 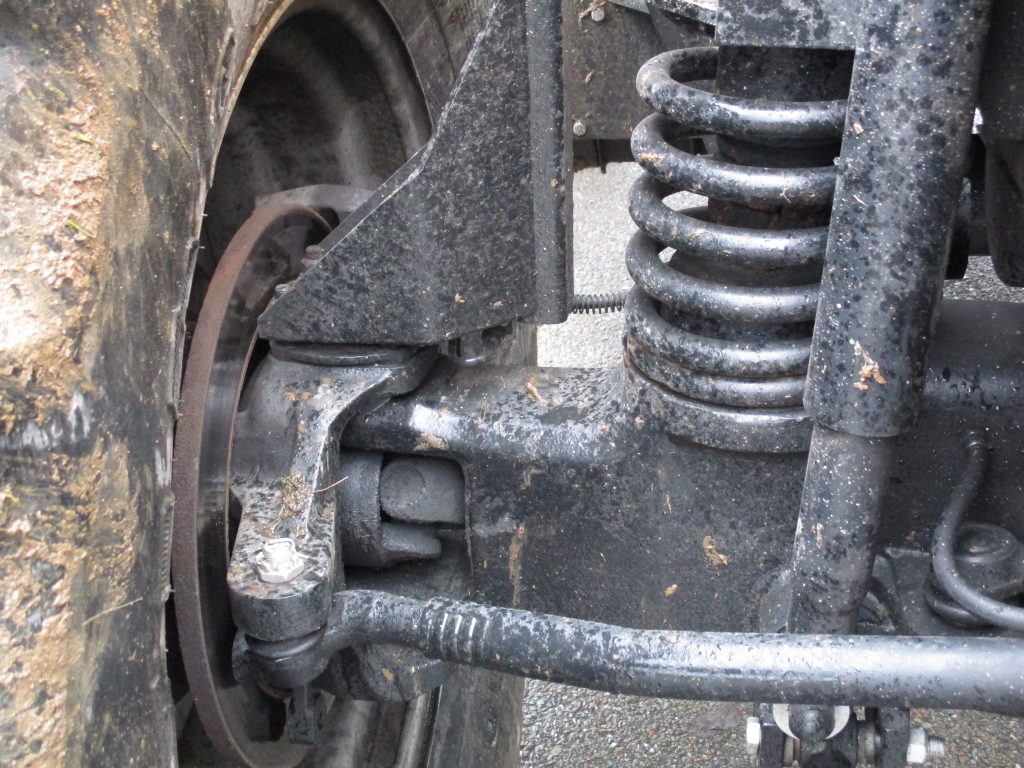 Due to its higher speed potential, the Fastrac was fitted with power-assisted steering, as opposed to the hydrostatic system found on most tractors of similar size.

Initial models were criticised for heavy clutches, poor steering lock and a perceived lack of reliability. Refined over the years, with the addition of a powershift facility, wet clutches, ABS and even four-wheel steering on certain models, they may be a ‘marmite’ machine to some operators. That said, there is a loyal base of owners out there – even here in Ireland. 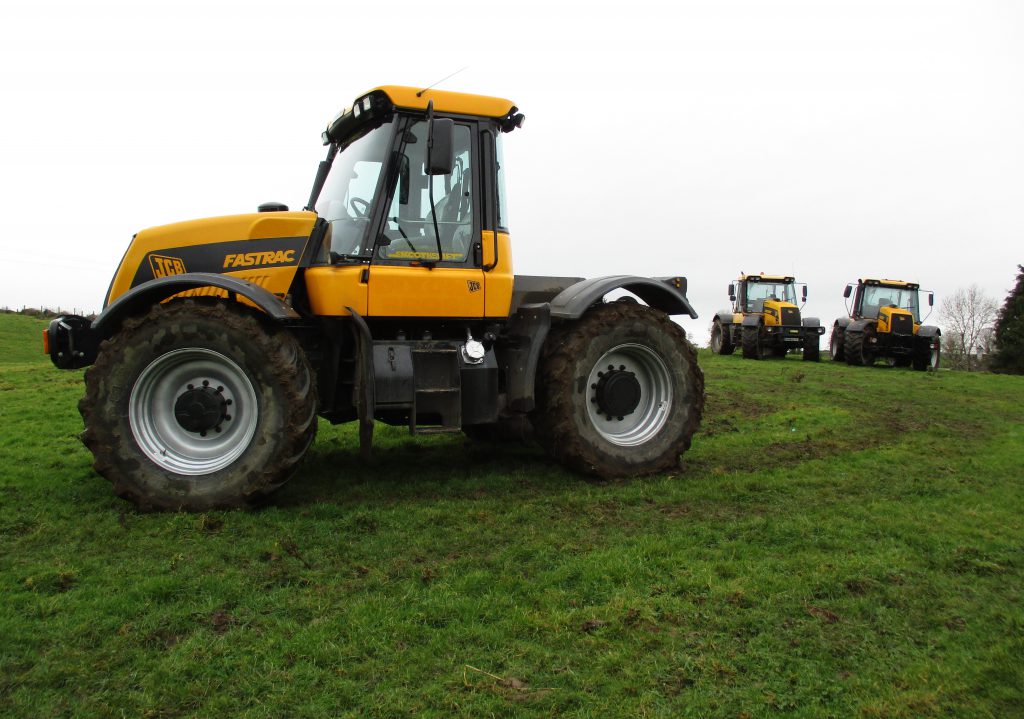 The noteworthy 3000 Series was launched in 1998. It initially comprised of two models – the Perkins-powered 3155 and Cummins-equipped 3185. Both engine types are reliable if properly maintained. 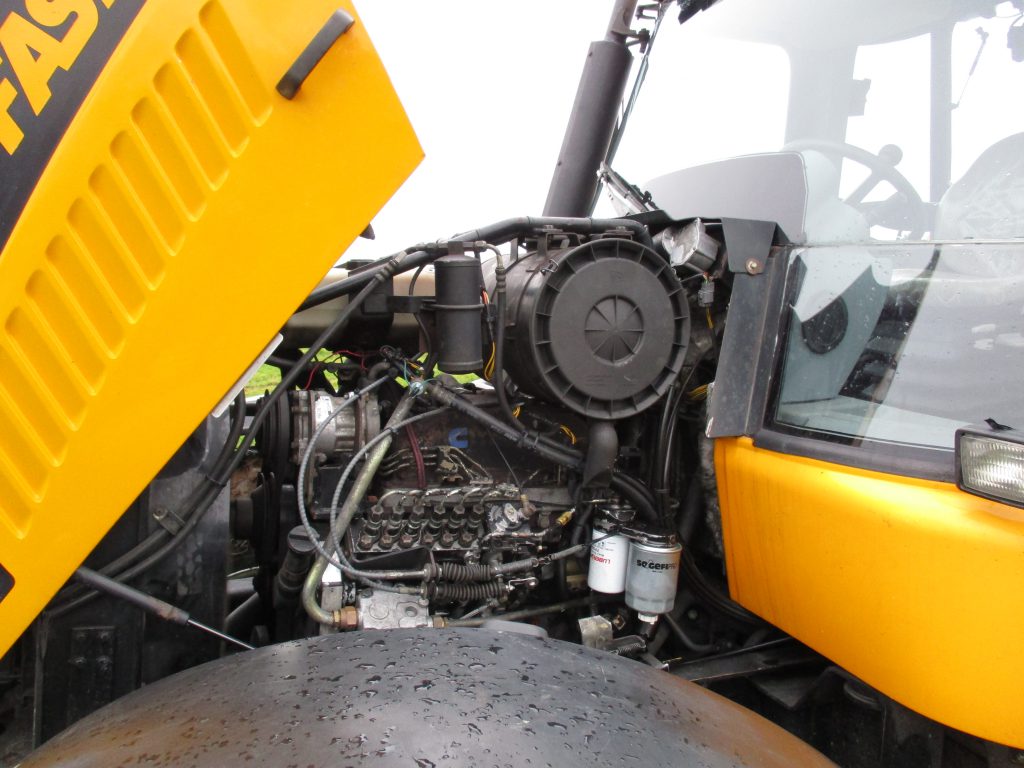 When AgriLand paid a visit to Russell Fastraxx to find out more, the business had a tidy 3155 in the yard; it had clocked 16,500 hours with no serious issues of note – beyond normal ‘wear and tear’.

When launched, 3000 Series models came with a host of upgrades over earlier versions, including an improved steering lock and a semi-powershift transmission (known as Autoshift).

A power-assisted dry clutch worked in tandem with a three-speed powershift unit (which included an automatic-shifter). Also in the package was an Eaton six-speed gearbox, with a 3F 1R transfer (range) box. This provided a total of 54 forward and 18 reverse gears.

In late 2000, Autoshift gave way to Smoothshift. The main upgrade involved the provision of a new wet clutch unit, with JCB offering a 5,000-hour warranty upon launch. Living up to its name – with smoother operation and a lighter pedal feel – this clutch set-up has developed a reputation for much-improved durability – certainly that’s the message from Robert Russell of Russell Fastraxx.

I’ve replaced two Smoothshift clutches in the 17 years since they were first produced. They are very reliable; they should easily last 10,000 hours in normal use.

The Smoothshift transmission, as found in the 3185, is also in larger, newer models such as the 3230. According to Robert, it has been known to reliably handle over 250hp in some ‘remapped‘ machines.

Synchronizers on gears four, five and six can suffer from wear on higher-mileage examples. It’s worth checking that gears engage smoothly, as stripping the gearbox is an “involved” process.

All such models are fitted with both hydraulic trailer brakes and a single/dual-line (truck-style) air braking system, allowing the Fastrac to handle most trailed implements.

Later Smoothshift models came with ABS; an easy way to spot this is the addition of a third brake fluid bottle under the left-side step (as opposed to just two bottles on non-ABS versions).

The cab is mid-mounted and it’s quite wide – with an usually large passenger seat. The driver’s seat on Autoshift models is from KAB; Smoothshift models are home to a Grammer version.

The gear lever is floor-mounted (and incorporates powershift buttons). It’s perched on the side console on later, higher-spec models. 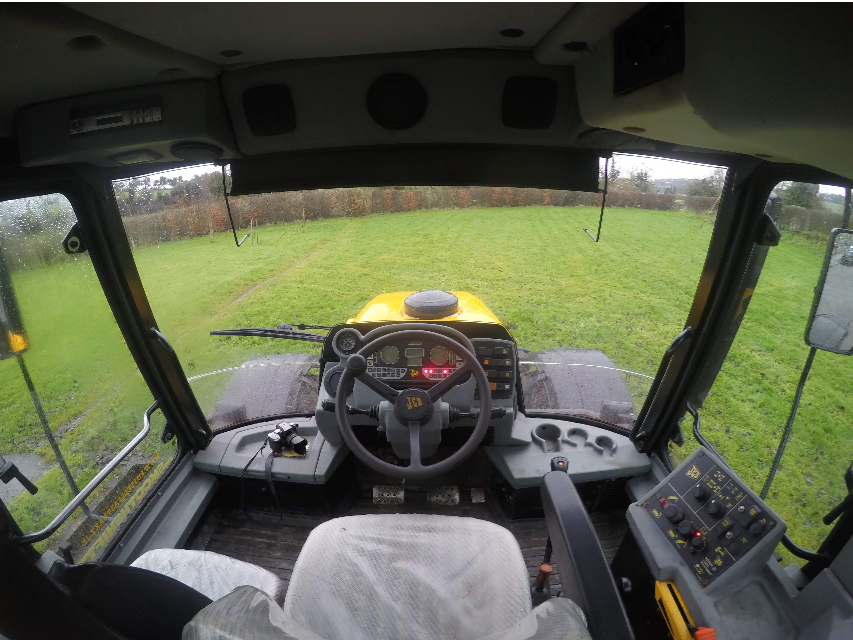 The ‘shuttle’ lever on the steering column (on the 3185) also acts as the low-medium-high range selector, but the clutch pedal must be depressed when changing direction.

It’s not a ‘true’ shuttle, as reverse is limited to just a single range (medium range). The handbrake lever is a stubby, truck-style air unit – to the right of the seat.

The handbrake is applied by a spring mechanism and released by air; it has its own dry disc on the rear drive-shaft. If not maintained and adjusted correctly, the assembly can rattle or, worse again, seize.

If neglected, it can ‘burn out’, with an ensuing risk of fire. 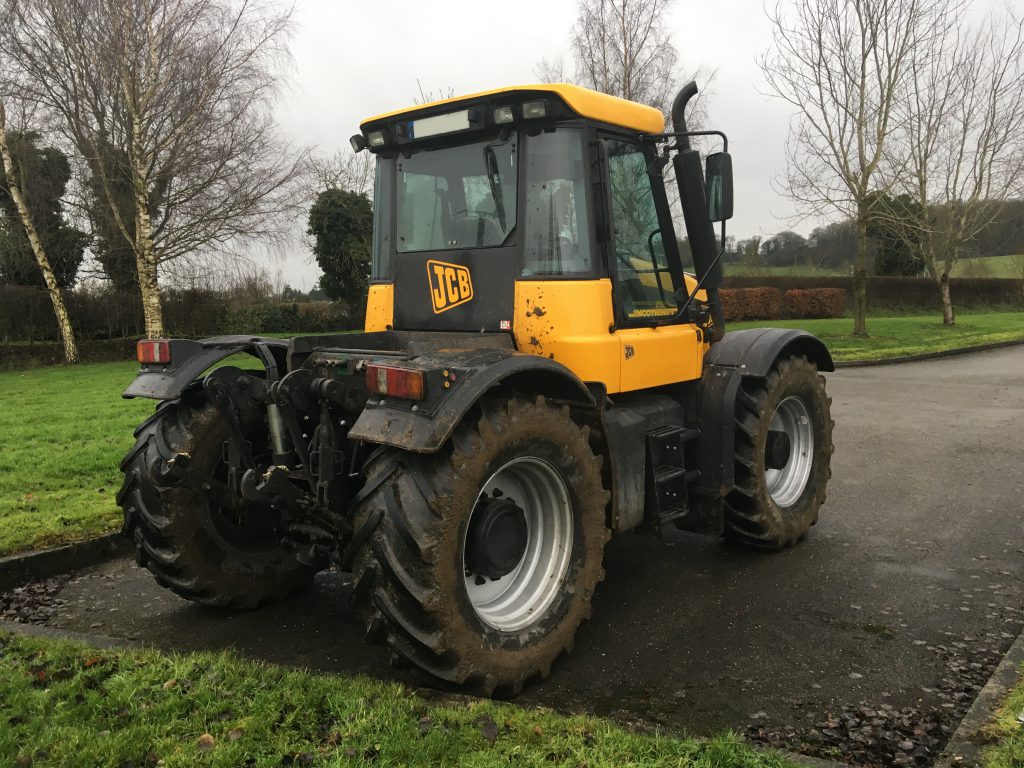 On earlier Autoshift models, the mudguards are quite short; extensions were fitted later on – to keep steps and bodywork clean. Improved paint and plastics have kept many used 3000 Series tractors looking reasonably fresh for their age, unlike some earlier models that have faded badly.

The dry clutch set-up in Autoshift models can wear rapidly, depending on driver behaviour and the type of work the tractor is doing. A typical clutch life-span is 5,000 hours or so.

If replacing it, it’s recommended that you change the ‘hollow shaft’ too – as the splines on this shaft are prone to wear. They have been known to fail. A replacement clutch ‘job’ will cost in the region of €3,000 – to do everything right.

Smoothshift clutches, by contrast, are tough and require minimal maintenance. There is, of course, a corresponding difference in used tractor values.

Oil change intervals are 500 hours for the engine. 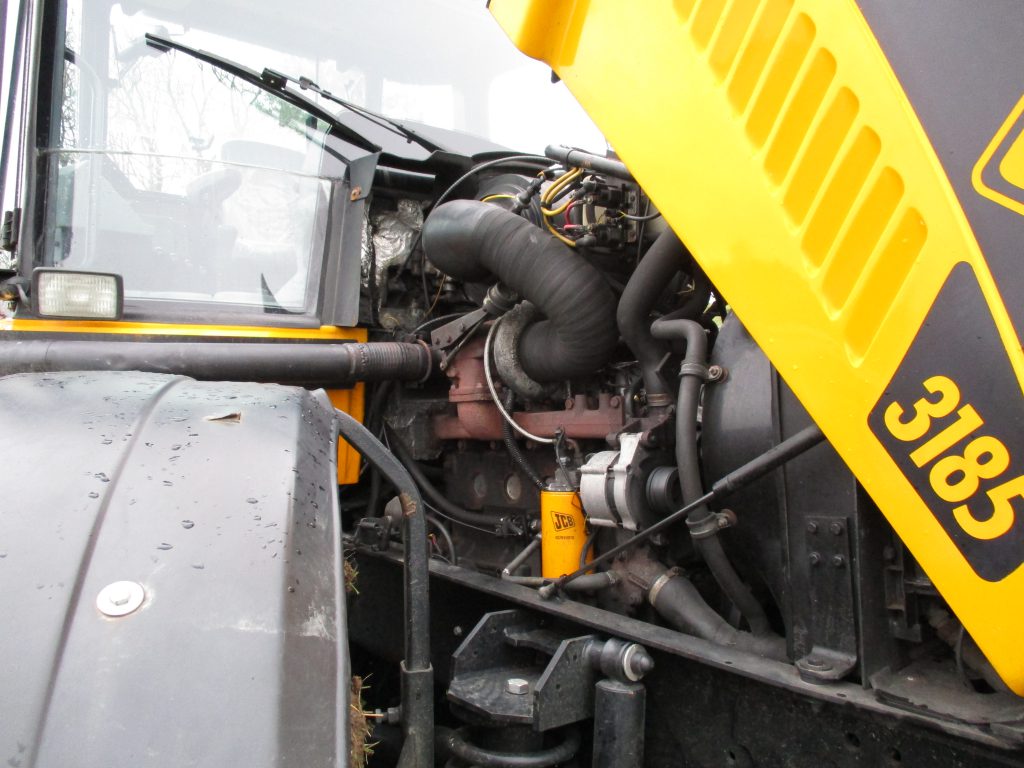 Due to the relatively small quantity within, front hub oil must also be changed at 500 hours. Transmission and rear axle oils should be replaced at 1,000 hours.

Brakes are straight-forward and easy to maintain – thanks to ‘external‘ design.

Brake pads can be inspected for wear without being dismantled; unlike most other tractors, there is no risk of oil contamination in the event of excessive brake wear.

On 3185 models, dual calipers (as fitted, for example, to larger 3230 tractors) are an easy upgrade – for those looking for extra stopping power.

Electronic spool valves (common on later models, like the 3190, 3220 and 3230) can be troublesome and are expensive to replace. Cost-effective conversion kits are available to keep spool valves functioning, through specialists such as Russell Fastraxx.

Due to the unusual design, there are more drive-shafts than on a regular tractor; these need small amounts of grease on a regular basis. The links and anti-roll bar that locate the front axle can wear, as can the lower links and upper ball and socket ‘V-link’ joint attached to the rear axle. 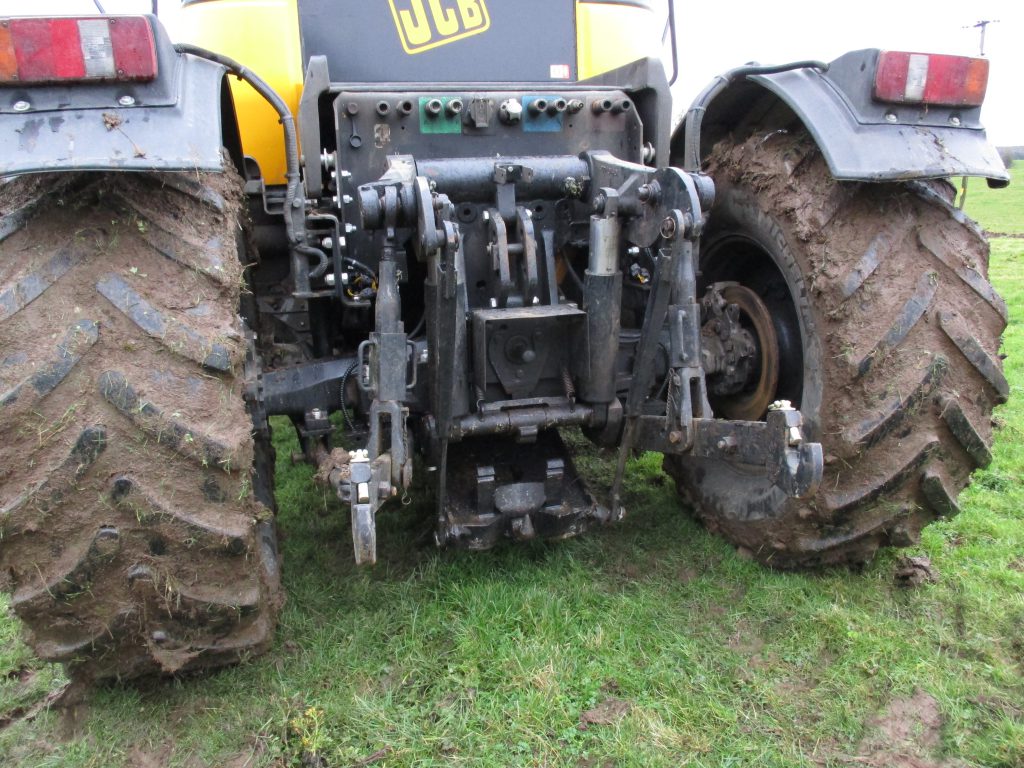 The non-telescopic Dromone pick-up hitch is simple and strong; it has a wedge-style latch that helps to reduce wear (and unnecessary rattling). However, like on any tractor, the hooks can wear.

On 80kph models, smaller 24in wheels are fitted (for better on-road handling and comfort). Bear in mind that the ‘F’ rated tyres on these tractors are expensive to buy.

Cutting corners when it comes to tyre choice is not advisable. Load and speed ratings need to be observed. Under-spec tyres can overheat and fail, leading to legal wranglings in the event of an accident.

Smoothshift tractors tend to command a premium (and are generally better-equipped). These start at around €15,000 (excluding VAT) in off-farm condition. Expect to pay up to the high twenties for a tidy, fully-serviced and partially-overhauled machine – such as the one featured above. 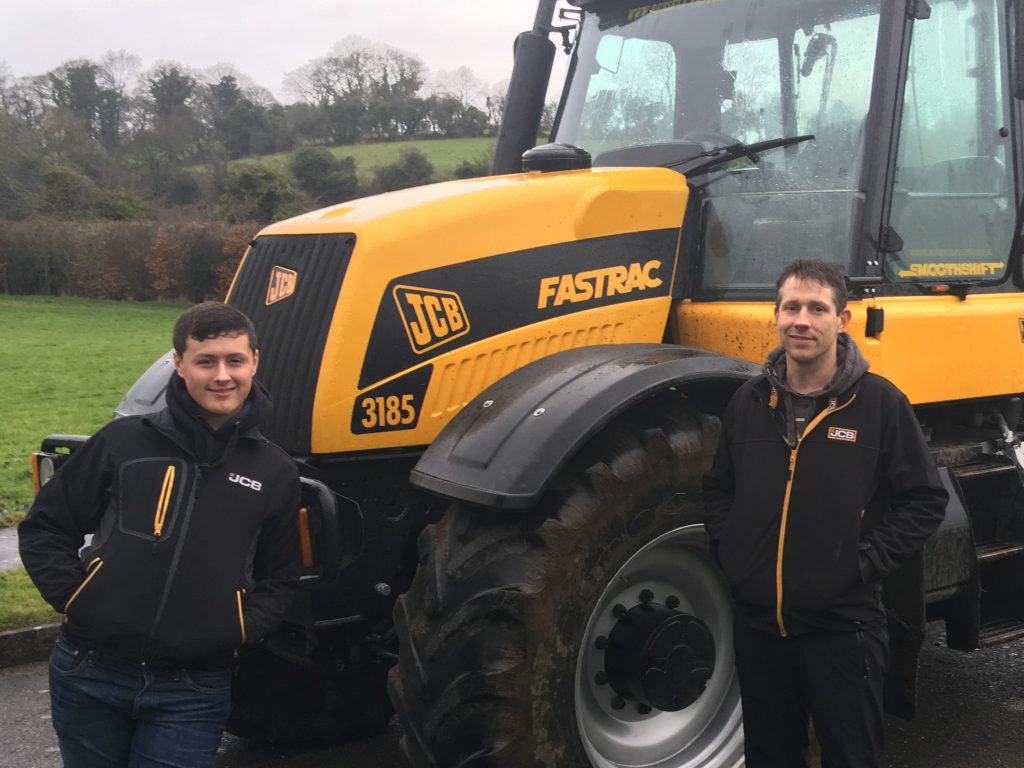 Thanks to Robert, Kaylem, Remus and Andrew at Russell Fastraxx, Kilmainhamwood, Kells, Co. Meath for their help in producing this article. 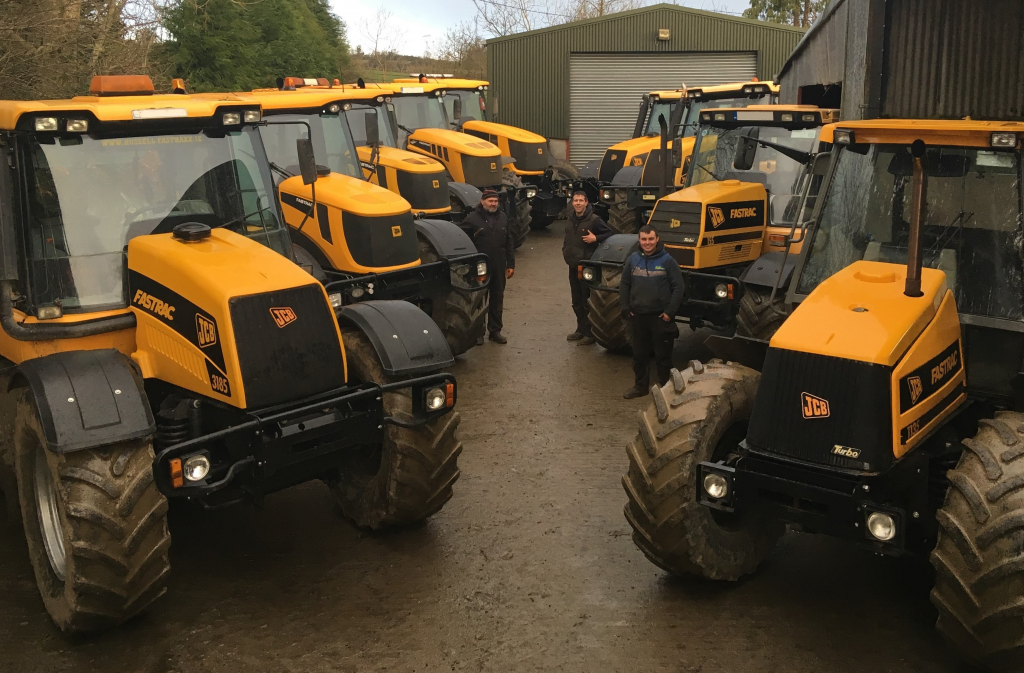 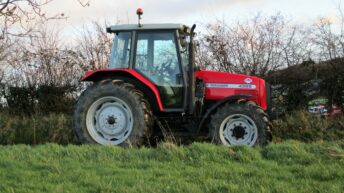