Bumper 2017 for FBD with €50 million profit notched up

FBD Holdings plc has announced a €50 million profit before tax in its preliminary announcement of results for the year ending December 31, 2017.

Up almost €39 million on the €11 million recorded profit before tax for 2016, the company has also announced a proposed dividend of 24c/share.

FBD managed the gross costs of Storm Ophelia – which initially accounted for between €10 million and €11 million – down to a net cost of €5.4 million after reinsurance.

The company announced that a number of key strategic targets have been met. These include:

A Gross Written Premium of €372 million was recorded for the year; this is €11 million higher than 2016’s €362 million. The company has claimed to have an “excellent” customer retention, with “strong” new business performance in farm, small business and consumer lines.

The 164% Solvency Capital Ratio (unaudited) increase was due to the improvement in underwriting profitability and the paying down of older claims reserves, according to the firm.

Commenting on the fruitful results, Fiona Muldoon, FBD group chief executive, said: “FBD has had an excellent year and we are pleased to see our strong strategic delivery reflected in these results.

“In particular, I am delighted the board has proposed a dividend of 24c/share for our shareholders. After three years of hard work and corrective action, my colleagues and I have delivered a strong underwriting profit for the year.

“Storm Ophelia was managed to a net cost of €5.4 million and our target return on equity has been exceeded a full 12 months ahead of schedule.

“FBD has displayed exceptional resilience and we are now well positioned to build on our loyal customer base.

As we enter our 50th year of trading and as the only publicly quoted Irish insurer, FBD is here for farmers, businesses and consumers for the long-haul.

The chief executive noted that, a year on from the ‘Cost of Insurance Working Group’ report, the rising cost of claims is still a challenge for Irish customers.

She added: “The Government must follow through in implementing legislation to provide a lower cost, sustainable claims environment for the benefit of all insurance customers.”

Wrapping up, Muldoon said: “We will work hard to help ensure that these proposals deliver for Irish farmers, businesses and consumers, who continue to bear the cost of significantly higher premiums than those seen in other countries.

In addition, as productivity and stock numbers rise on Irish farms, FBD intends to continue to work with its farm customers to help deliver improved farm safety practices to halt the alarmingly high level of death and injury in the farm workplace. 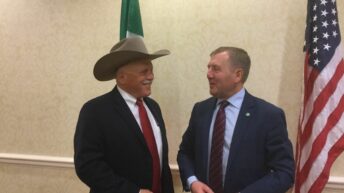 Exchange programme with US state for department veterinary officials explored