Buildings focus: Leaving no stone unturned in this beef-finishing unit in Co. Waterford 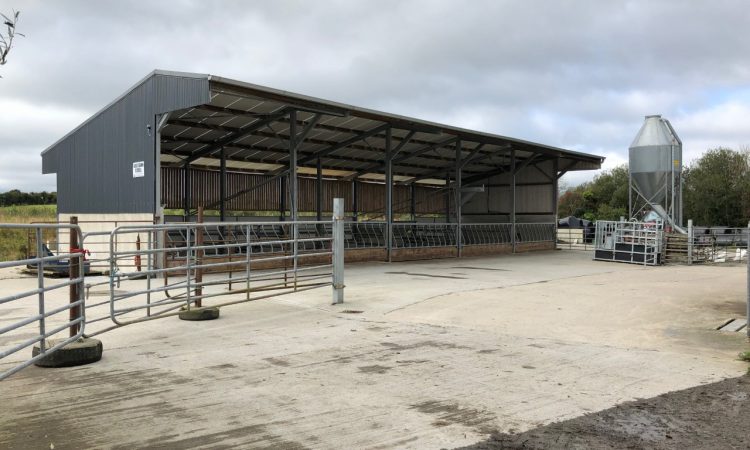 The Waterford-based farmer took part in the Teagasc BETTER Farm Programme between 2012 and 2016.

Originally, Billy used to run two beef farms; one in Tipperary and the other where he currently lives in Passage East.

However, with the way the beef industry has fallen over the past few years, he made the decision to lease his farm in Tipperary to a neighboring dairy farmer.

Subsequently, this allowed Billy to build on the facilities he currently had on his farm in Co. Waterford.

Farming 52ha of good-quality grassland, with a paddock system in operation, the farm is well laid out to finish cattle efficiently.

Furthermore, Billy hopes to purchase 18 month-old Angus steers this autumn, but “only if the price is right.”

It’s a very specialised but simple system that I operate. I grass measure on a regular basis and make silage of at least a dry matter digestibility (DMD) of 75%.

“I have a nutritionist – from Specialist Nutrition – who makes up my diets for both my finishing and store cattle.”

Last year, he finished 220 head of cattle; however, due to the volatility of the market, no stock has been purchased since early summer.

I would regularly go to the mart and buy a trailer load of yearlings every week; however, I haven’t been to a mart since early July. There is just no sense to buying cattle at this moment in time.

Billy has a capacity to hold 200 head of cattle between the two sheds. Moreover, he would finish 100 head of stock in the shed and a further 120 head off-grass only.

At the moment, he is worried he might not be able to fill his new shed with cattle due to the uncertainty that surrounds the beef industry.

After deciding on a site, the next task was to begin the build. Billy built the shed directly opposite from where the original finishing unit was built in 1974.

The build began in autumn of 2016 and was finished the following spring of 2017.

The steelwork was provided by Gleeson Steel and Engineering.

The design includes a five-bay slatted unit – with feeding space at the front and back – and a tip-over water drinker that empties out the water with the pull of a lever.

The slatted pens are 4.8m long and 5.0m wide. However, the tank is 27m long and 4.7m wide and 2.4m deep. Two agitation points are located at either end of the tank.

Billy left no stone unturned when it came to installing, and he bought the best equipment to put him in a position to get cattle on and off the farm as quickly as possible.

Moreover, some extra features were included in the design to aid in animal welfare and also to handle and move cattle safely in the shed.

Three water drinkers were installed which have a lever built into them that allow a farmer to empty the water from the tank if it were dirty and undrinkable.

Furthermore, at the back of the shed, the galvanised sheeting is hinged that allows it to be opened up to feed cattle at the back and also to allow for extra ventilation if required.

There is a lever at the front of the feed passage that enables the sheeting to be opened up.

The fact I use a diet feeder to feed my cattle has meant I have no use for the feeding passage at the back of the two sheds. However, they are handy to allow for extra airflow throughout the shed.

The final feature of the design is four gates, which were installed at the back of each pen. They allow Billy to move the cattle safely around the shed.

At the side of the shed, Billy is able to collect all the rainwater that flows into the gutters.

Moreover, there is an underground tank that collects dirty yard water.

To finish up to 200 head of cattle, it requires a lot of housing. Originally, Billy was finishing up to 120 head of cattle in the old slatted unit before he built the new shed in 2017.

There is also an isolation pen at the back of the shed. This is where Billy houses purchased cattle when they first arrive on the farm.

The original finishing shed was built in 1974 and is in great condition, with Billy adding to its design any chance he gets.

Some features, which were installed to improve animal welfare and comfort, are rubber mats. Billy is gradually installing one mat per pen at a time, as they are quite expensive.

“The rubber mats are expensive; however, they do a good job when I am finishing cattle on meal .”

Another feature is the adjustable, galvanised sheeting at the back of the shed. This increases the airflow throughout the shed as it can get stuffy when at full capacity.

In the yard, a friend of Billy’s came up with a simple yet effective solution to stop cattle from trying to jump out over the crush and, also, to make handling the cattle easier.

A metal railing that goes the length of the crush was hinged at the top of the wall to prevent the cattle from escaping.

“There are two meal bins: one for protein which is made up of distillers gran; and the other for energy which consists of maize meal.

If I want to make any return from my cattle, I need to be feeding them the correct mix of silage; protein; and energy.

“In order to have any chance to make money out of this enterprise, you need to be on the ball and that’s what I am trying to do.”

The cost of installing the entire unit was €100,000, including VAT.

Commenting on the build, Billy said: “It’s a great job and I’m happy with how it turned out.

“However, with the way the beef job is going now, it’s hard to justify it.

“At the moment it is costing me €5.00/kg – including my labour – to produce beef and the meat processing plants are only paying us, the farmers, €3.50/kg; how sustainable this is long-term is a huge issue.

I have top-class facilities; machinery; and grassland management. I am making very poor returns on my time and investment.

“Something needs to change or more beef farmers are going to go out of business,” Billy concluded. 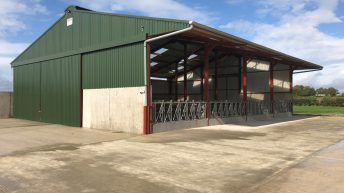 Buildings focus: Suckler and beef-finishing unit all under the one roof in Co. Kildare