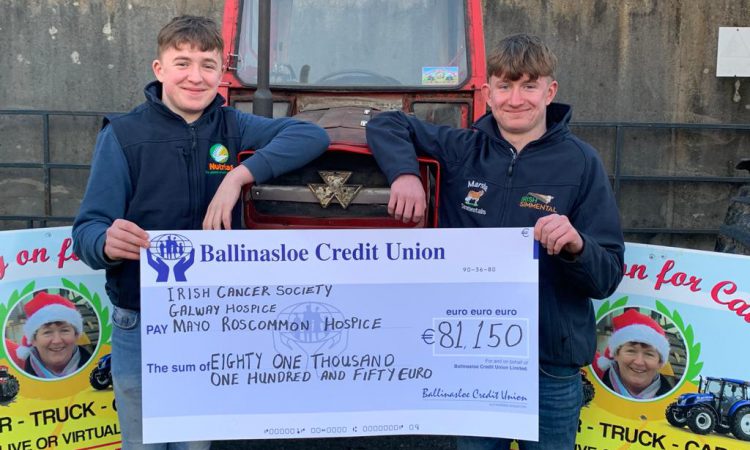 Two south Roscommon brothers have raised a staggering €81,150 for cancer services after organising fundraisers in memory of their beloved mother.

Martin (17) and Shane (15) Glennon, students of Garbally College, Ballinasloe, raised the money for The Irish Cancer Society, The Galway Hospice and the Mayo/Roscommon Hospice.

It was instinctive that Martin and Shane decided to organise a fundraiser to honour the memory of their mother, Cathy Glennon, who passed away on October 8, 2020, just six weeks after being diagnosed with cancer.

This provided a great source of both support and entertainment. It was a campaign that caught the imagination of all ages.

In addition, the brothers ran an online auction with the help of Denis A. Barrett auctioneer. Over 40 lots went for auction on December 29 on Denis’s website, including AI straws; embryos; turf; timber; a bathroom suite; and a lamb for the freezer. The ‘live from your living room’ auction was a huge success, bringing in over €18,000.

Initially the lads set out to raise €5,000 for charity but they were quickly overwhelmed by the way the campaign took off and by the generosity of all who supported them, not only from their own community but from all over the country and from abroad.

Shane and Martin said they never expected to raise such an amount of money.

“We thought we might raise €5,000 but never anticipated €81,150. This money will help a lot of families through the services provided by the hospice and The Irish Cancer Society. We are incredibly grateful to everyone who supported the fundraisers, those who donated money, sponsored prizes and auction items, bought items, posted pictures and supported us in any way.

“We would like to thank our family, friends, our community of Moore and surrounding parishes and mam’s in Aughrim for getting involved. We would also like to give a special word of thanks to the members of our GAA Club, Padraig Pearses for their support.”

Above all, the boys attribute the success of their campaign to the support they received from their peers and fellow farming community. “We’d like to thank them very much.

Through this campaign we have not only raised €81,150 but we have raised awareness too, of the hospice and their services especially among our friends. Unfortunately, in Ireland one in two people will develop cancer during their lifetime, according to the Irish Cancer Society.

“During the last few weeks many people have come forward to share how cancer has affected their families. We know that due to Covid, funding was down for the Irish Cancer Society and we are glad to help out,” remarked Martin.

CEO of Mayo Roscommon Hospice, Martina Jennings, reacting to the final sum raised, said: “This is an unbelievable sum of money to raise from one event for three charities, including ourselves. Martin and Shane showed great strength in organising this event so soon after the passing of their mum Cathy.

“What they have done by raising this total is ensure so many people get the same care that Cathy did within our palliative care service. 100% of the money raised by ‘Driving on for Cathy’ will go directly to providing palliative care services in Mayo and Roscommon and we cannot thank Martin and Shane enough for what they’ve done.

“To organise such an event in ordinary times is difficult enough but doing so in a pandemic is truly remarkable. So we just want to say thank you from the bottom of our hearts.” 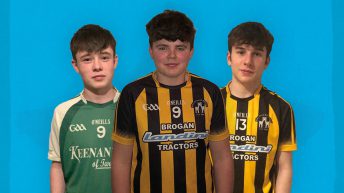