Bring a bit of German efficiency to your dairy herd

Fleckvieh is the second largest cattle breed in the world and is starting to become more popular in Ireland.

The balanced, productive dual-purpose cattle are suitable for the production of milk and beef in Irish conditions.

A key driver of the breed in Ireland has been Tyrone native David Hazelton of Bayern Genetik.

He says the breed is set to take off here with more and more dairy farmers contacting him to include Fleckvieh in their breeding plans.

So what is a Fleckvieh?

For those that don’t already know, to a large degree, Fleckvieh is a dairy version of the Simmental breed.

Since 1830, original Simmentaler cattle from Switzerland were imported to the Bavarian Kingdom and to Austria to improve the local dual-purpose breeds.

At these times, the Simmental cattle were famous for their milk production and drought capacity, but were late maturing with little depth and coarse bones.

In 1920, the herdbook in Southern Germany was closed and Fleckvieh was developed as an independent breed.

The breeding aims were focused on a “middle-of-the-road type animal” with excellent muscling, good milk production and draught performance. Therefore, an excellent performance testing system and a strict breeding programme were worked out.

This systematic improvement of the production traits led to a modern, high-productive dual purpose breed, that fits the economic needs of today.

5 key benefits of Fleckvieh in an Irish context

According to Hazelton, the Fleckvieh breed is becoming more popular in Ireland for a number of key reasons:

1.Value of the calf

One of the key benefits of the Fleckvieh is the dual purpose nature of the breed. Fleckvieh calves grade better and weigh significantly better than calves from other dairy breeds.

According to Hazelton, in the north at the moment, it is recognised that a Fleckveih calf at a month old, out of a Holstein, is worth a premium of £250.

Depending on management, natural conditions and feeding intensity, herd performances of 8,500kg of milk with 4.2% fat and 3.7% protein are achievable.

The annual milk production increases up to the fifth lactation.

According to Hazelton, the constituents will always rise with Fleckvieh but farmers ‘need to be patient’, he said.

“You’ll get as much milk from a Fleckvieh as from a Holstein and more because she will live longer.”

Another significant trait of the breed is its top rank with regards to udder health with an average somatic cell count of less than 180,000 across all lactations.

One of the key benefits of the Fleckvieh breed is the cow’s ability to last in the herd.

Fleckviehs average 8-10 lactations compared to an average for a Holstein in the Northern Ireland at the moment of about 2.7.

Fertility is another key advantage of using Fleckvieh genetics.

On average 1.8 straws of semen will get a Fleckvieh cow in calf, rather than four for a Holstein.

“You don’t need any sophisticated heat detection systems either when a Fleckvieh is on heat. You will know it,” Hazelton explains.

Another key bonus of using Fleckvieh is the value of the cull cow.

“Cull price of your cow after 10 lactations is huge, at least, 3 times the price of a Holstein-Friesian.

“With Felckvieh you are going to grade at least an R if not a U.” 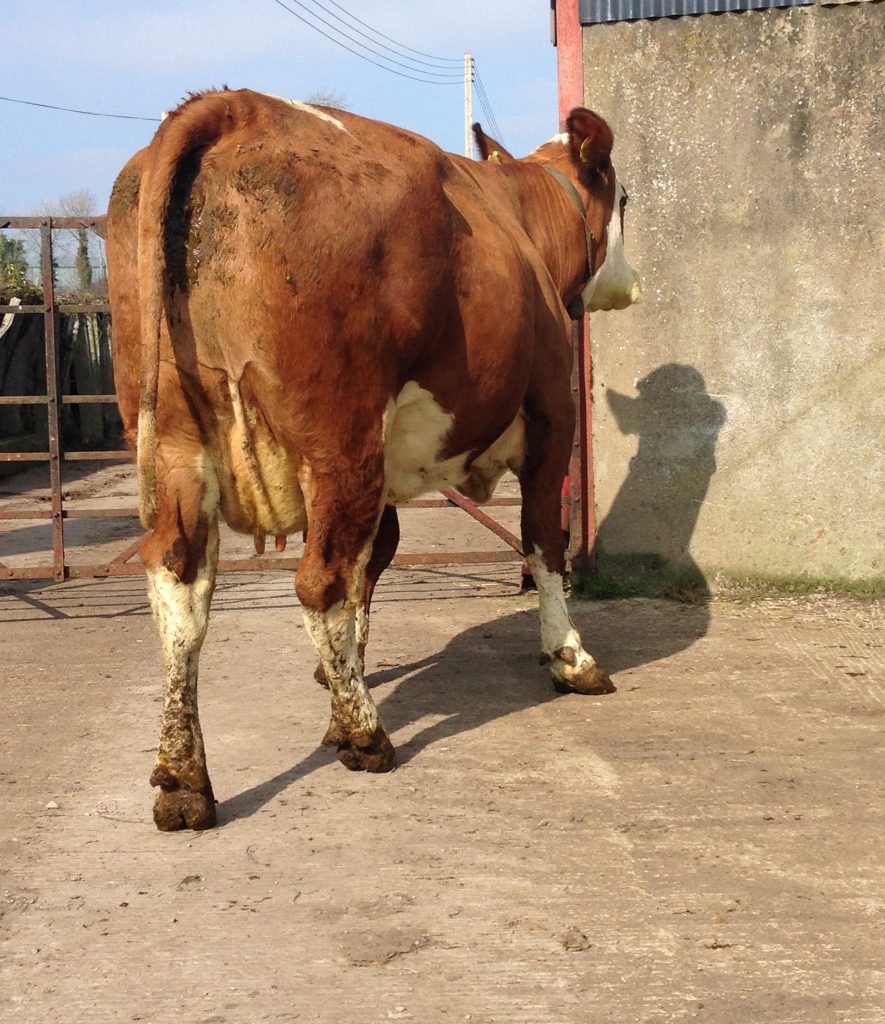 Fleckvieh cull cows can reach a deadweight of 350 to 450kg.

Hazelton, a pedigree Simmental breeder himself, was in a past life the Genus/ABS boss in Northern Ireland – a role he held for quite a number of years.

“Having finished in the AI business, I bought myself a nice farm and decided to take early retirement and go farm my Simmental cattle.”

Hazelton noticed that he needed to get more milk production traits into his Simmental herd. From his experience in the AI business, he thought that the Fleckvieh breed was the best qualified to do the job.

“When you breed an animal for 40 years for beef you lose the milk. So I went to Germany and visited three AI stations and I got Fleckvieh semen to put into my Simmentals.

“Which, 12 years down the line, has been very successful,” he said.

However, Hazelton says that when in Germany he identified the opportunity that could be there for the Fleckveih breed in Ireland in a dairy context. 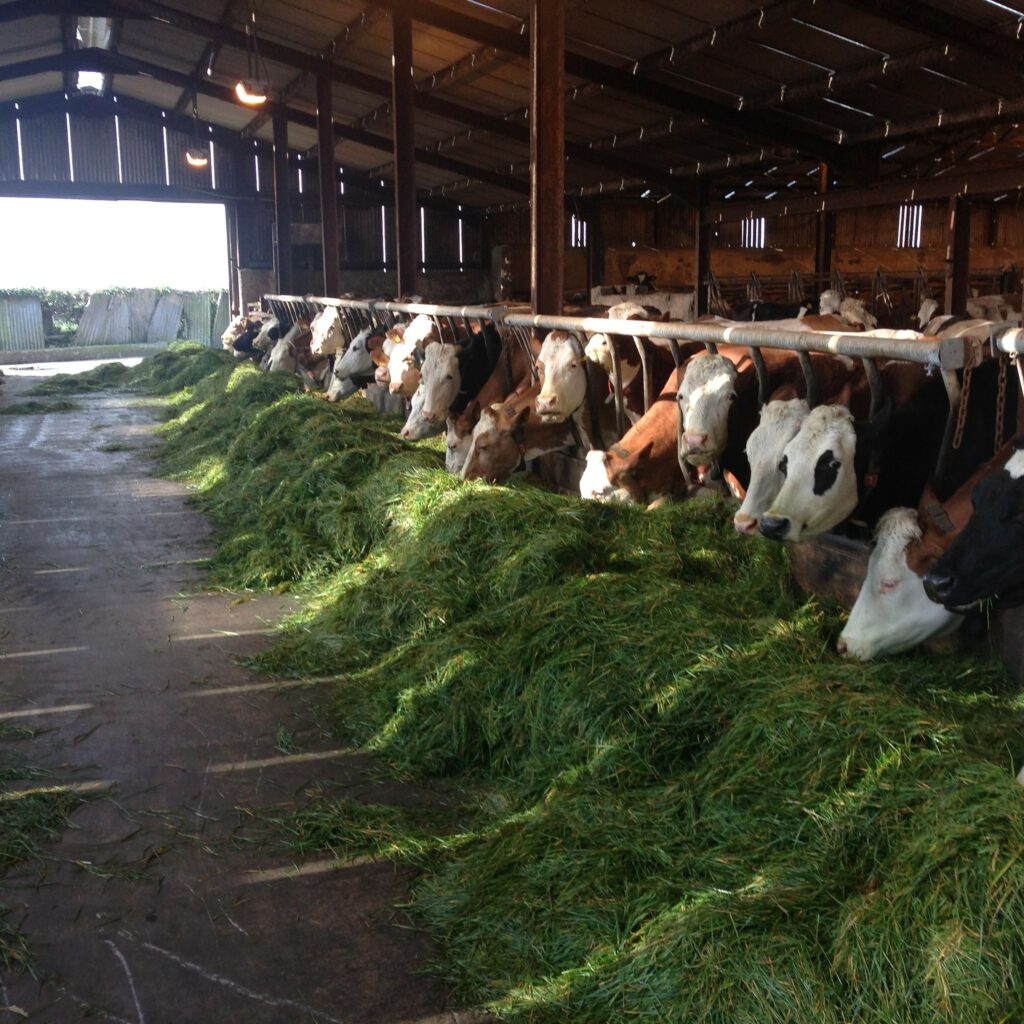 “I asked the Germans to point out their best bull to cross with Holstein cows. They told me a bull called Samurai and I bought 200 straws and brought them home to Ireland.

“I sold it to good customers of mine from over the years. I sold 10 straws here and 20 there to customers that were cross breeding.

“The whole thing has really taken off since that.”

Hazelton said that following initial success in the first two years he went back to Germany and asked for the franchise in Fleckvieh semen for the UK and Ireland.

Who’s buying Fleckvieh at the moment?

Hazelton says there is a huge variety of dairy farmers interested in the breed in Ireland.

“A lot of farmers hear about the breed through word of mouth and they are eager to give it a try.

“In the North, the first year we have records for is 2006, there were 666 Fleckvieh animals registered.

“There has been a steady rise and up till September of last year, it was over 10,000 and growing,” he said.

Crossbred Fleckvieh cows can be black and white or brown and white depending on the genes of the animals in question.

“You can have them a very white bodied animal, as well, depending on the Holstein Friesian you have used the Fleckvieh semen on.

‘I wanted a more robust cow’

Carlow farmer Barry Nolan was among the first farmers in the Republic of Ireland to get into the breed.

Milking all year round, Nolan was looking for a more robust cow on his farm and, to date, Fleckvieh has fitted the bill.

“I got into Fleckvieh in 2006. We were pure Holstein at the time and we wanted a change.

“There was nothing majorly wrong but vet bills were high and we were having problems with mastitis,” Nolan said.

He explained that his system was ‘crying out’ for a more robust breed.

“I found out about the Fleckvieh got a few straws and haven’t looked back since. Fleckvieh is just a good fit for our operation,” he said.

Nolan said 25% of the herd was breed to Fleckvieh in the first year and after nine years he will be going 100% Fleckvieh this year.

Costs are another key benefit according to Nolan.

The way dairying is going it’s all about focusing on your costs. I hope to be able to feed the cows in the main home grown forage and the Fleckvieh are a high forage animal

“If you cut back on feeding concentrates the Fleckvieh won’t lose condition.

“Whereas, you need to keep feeding the Holstein or she’ll milk off her back and won’t go back in calf,” he said.

Performance is not an issue either, according to Nolan.

He said some farmers might be concerned that when they look at the performance of a Fleckvieh and a Holstein in terms of yield, as the Holstein will be ahead.

But what I would say is ‘give the Fleckvieh 3-4 years and she will out perform the Holsteins without question and not only that they will remain in the herd longer’.

Nolan says the cows must be able to justify themselves on the dairy side alone however, he stresses that the beef side is a big advantage.

“We carry all our stock to slaughter. All our male cattle are slaughtered at 24 to 28 months.

“The average kill out of the Fleckvieh cross bullocks is 0.58kg dead weight per day, with the cattle achieving minimum O+ to R+ grade.

Fleckvieh’s finish quicker and grade better, Nolan says and he also highlights that the breeds performance on the grid is a real bonus.

“It’s getting harder and harder to secure a flat rate price, when the dairy breeds are put on the grid they really suffer with the Fleckvieh I have no fear of the grid as they grade well.”

The advantages of Fleckvieh:

Dutch farmer Jan Jansen has been using Fleckvieh Genetics for many years and has said switching to the breed has been a key driver of profits on his farm.

Jansen explained that he was having too many problems with Holstiens cows in the past in terms of fertility, health, and problems at calving.

He said that having read an article about a farmer in Germany that was having great success with Fleckvieh he was inspired to make a change.

“The farmer only lived 40km away from my farm so I went to visit. His crossbred herd was very impressive.

Jansen said that he started with the breed in 2004.

“So far we have no regrets. We have good healthy calves, lower veterinary costs, our beef return is much better and the milk performance is also good.

According to Jansen, his crossbred herd of Fleckvieh cows are currently yielding 8,300kg with good milk solids.

“I just find that crossbred cows are healthier and stronger,” he said.

Jansen explained that in Holland there is a restriction on the use of antibiotics on farms.

He said on dairy farms this makes good udder health vital and the Fleckvieh breed is known for this trait.

“In the past, farmers used antibiotics routinely in the dry period, now we can only use antibiotics on cows with high cell counts.

“Last year, we only had two cows with mastitis out of 95. Which is really good,” he stressed.

The ability of Fleckvieh calves to command a premium in the beef market is also seen as an important benefit of the breed by Jansen.

He sells his calves between 2-3 weeks of age is currently getting a premium €100 per head.

Jansen runs his Fleckvieh cows in a pasture-based system. His cows are indoors from November to April and are turned out to pasture during the summer.

“We are trying to get 100% Fleckvieh. We think it will bring us the most profit.

He said that there is quite a lot of farmers in Holland now crossing with the breed, with approximately 250,000 inseminations a year.

Jansen stressed that Fleckvieh is a breed that farmers must “get used too”.

“Milk production will be lower in the first lactation compared to Holsteins however, by the second and thrid lactation, there is no difference,” he said.

‘Let the cows do the talking’

Hazelton says his pitch to Irish dairy farmers it to tell them to give Fleckvieh four or five years and the benefits of the breed will be self-evident.

“If you’ve got 100 cows, buy 20 straws and get the heifers on the ground and let them do the talking, not me.”

Fleckvieh semen is available from:

The sires featured in this article have been specially selected to produce strong milky dual purpose cows suitable for different management systems, milk payment systems and pedigree/cross breeding programmes throughout the British Isles.