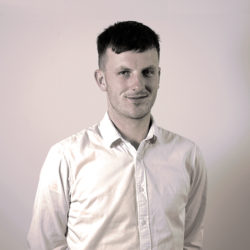 Anyone who has been watching the cattle trade over the past number of months will have noticed the heightened interest from feedlot buyers for forward-type Angus cattle.

Mart managers from around the country have told Agriland of feedlot buyers polling one another into prices “north of €2.50/kg liveweight” in an effort to fill out loads of suitable, in-spec Angus stock as factories struggle to fill contracts for Angus beef.

For example, a mart in the southern part of the country witnessed an exceptional trade for Angus heifers and steers last week with an Angus bullock weighing 728kg selling for €1,850 or €2.54/kg.

Assuming the bullock mentioned (above) killed out at 50% of its mart weight, it would leave the buyer with a carcass weight of 364kg.

Without making any allowances for transport or mart fees, this bullock would have to come into €5.08/kg to break even on its mart price.

Other trends with angus cattle

Another trend observed currently in the Angus trade is farmers who have over-fit cattle (namely heifers) that would be grading a 4+ or a 5 in flesh in the factory, are opting to show these beef cattle at the mart, rather than face the penalties in the factory for over-fat cattle.

However, it is important to note that prices of €2.50/kg and above are not freely on offer at marts – as of yet – and are only witnessed on occasional lots of cattle.

Currently, the general run-of-the-mill O-grading, dairy bred Angus heifers and steers are trading at anywhere from €2.20/kg to €2.40/kg liveweight, with more on offer for better grading cattle.

This week, the general run of factory quotes is a base price of approximately €4.25/kg for steers and €4.30/kg for heifers, with a 20c/kg quality assurance (QA) bonus and a further 20c/kg Angus bonus – once the cattle are in-spec.

One mart told Agriland of a farmer giving as high as €2.78/kg last week for Angus store cattle and noted that many pundits of the cattle trade are now remarking “Angus is the new Charolais”.