Behind the Minister: ‘I was the pig in the middle’

“I was the pig in the middle,” jests Minister for Agriculture, Food and the Marine, Michael Creed, sitting down for a special ‘behind the minister’ interview with AgriLand.

Born into a family farm in Macroom, Co. Cork, Creed was the only boy, sandwiched between six sisters.

“I’m lucky to be as good as I am, considering all I went through,” he smiled.

He fondly remembers how he was invariably turned out the door in the morning, while the girls could “lounge around the kitchen”.

Being a lover of the great outdoors, he didn’t shirk his responsibilities on the family’s 80ac holding – initially a mixed farm, it later converted into dairying. (The homestead went out of active farming in 2000.)

“It wasn’t anything I complained about. Yes, in my teenage years I hated this thing of having to come home in the evening and milk cows – while everybody else was going out after football matches. But that’s the joys of any dairy farm operation; I liked it; you are either the outdoor type or not,” he said.

A quick glance at the photographs perched around his office at Agriculture House in the heart of Dublin city, illustrates the importance of family to the ‘Rebel County’ native.

As the son of late Fine Gael politician, Donal Creed (aged 93 when he passed away recently), who held various ministries throughout his career, he grew up in an interesting household.

“My father was first and foremost a farmer. He got into politics later. My mother was a pharmacist who had her own business, so there was an interesting dynamic in the house; there was a lot of stuff going on,” he said.

In many respects it was an idyllic country childhood; however, as a youngster, he was always very aware that his father was a politician.

He vividly recalls his father’s longing to disappear inside the farm gate.

After qualifying as a history and geography teacher at University College Cork, Creed had initially planned on a career in education. However, in 1984, the then 21-year-old – who was very involved in his local Macra na Feirme and GAA clubs – came home to farm full-time.

Although his parents never encouraged him to enter politics, Creed would inevitably follow in his father’s footsteps.

“Politics was an evolutionary process for me. I remember being quite happy when I left college to go out farming; my father never put any pressure on me in terms of politics being a family tradition.

“He was always clear that there were upsides and downsides to it,” he said.

Michael Creed was first elected to Dail Eireann in the general election of 1989 – thanks in no small part to the support of his siblings – especially his late sister Claire, who sadly passed away just last October.

“I’m hugely indebted to all of my family; I wouldn’t hold the position I have without them. We are very tight; they all dig out at the appropriate times; that would be widely known locally. They are a formidable operation when they mobilise.

“My eldest sister, Claire – who passed away seven weeks before my father – would have been the driving force in a lot of my campaigns.

Being part of a political household you know that it’s a team effort and they very much integrated seamlessly with other local Fine Gael organisations. It’s very much part of who we are.

“They invest so much in it and you are really conscious that you are flying a flag for them; as well as being a representative for the constituency,” he said. 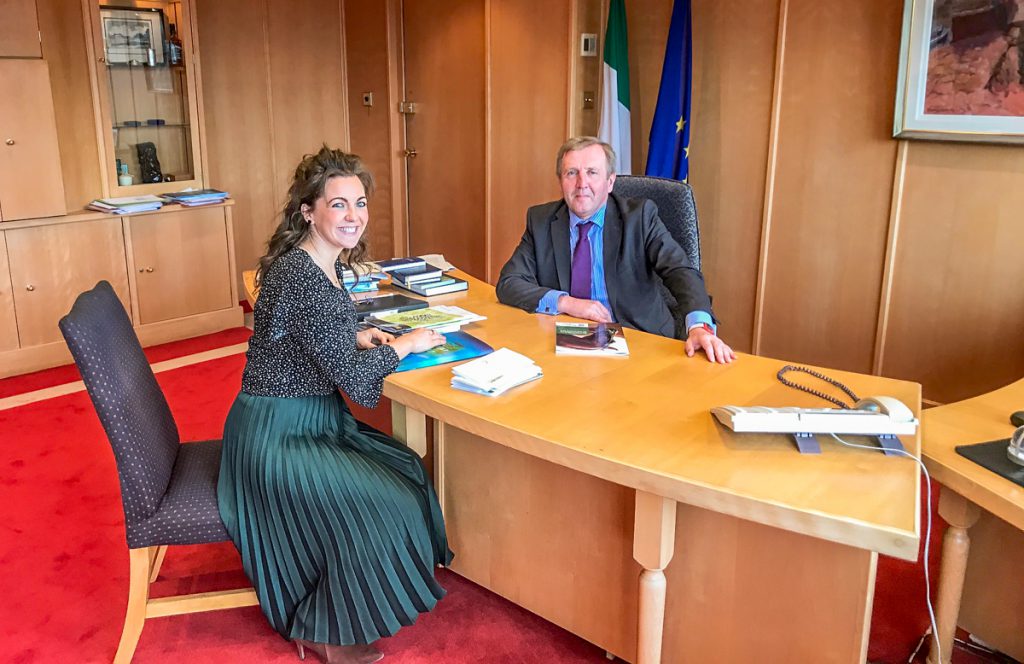 After regaining his Dail seat in the general election of 2007, Creed was appointed party spokesperson on agriculture, fisheries and food.

But then, in June 2010, Creed was one of 11 members of the Fine Gael frontbench to publicly support a no confidence motion in former party leader, Enda Kenny.

Kenny survived the challenge; but he took the decision very personally. Creed, considered a good friend of Kenny, failed to make the former Taoiseach’s cabinet in 2011.

After a number of backbench years spent boosting Fine Gael’s positioning in the European parliament, Creed’s chances of redemption were enhanced.

Yet, he was surprised when he was appointed Minister for Agriculture, Food and the Marine during the cabinet reshuffle in 2014.

“Being honest about it, I was not expecting a call from Enda Kenny. I’m forever grateful for that in many respects; I thought that ship had sailed for me.

“Oh Christ, it was phenomenal. I confess to having been a little bit overwhelmed by it. I just didn’t expect it; I wasn’t prepared for it.

“If I’d been given my pick of government department, which I hasten to add I wasn’t, but agriculture would have been the one. I could hit the ground running faster in this department; I had a better chance of understanding the issues earlier.

“I’ve been the beneficiary of the rural way of life and I am seized by the obligation to try to make sure that farming, which is a critical component of life economically in rural Ireland, is in a position to deliver for rural communities and farm families,” he said.

Despite the honour and pride he associates with the position, Creed is also mindful that his ministerial duties often remove him from his local constituency in Cork north-west.

“I still keep abreast of all of the issues; but it is becoming more and more difficult to interface directly with everybody. I confess it does worry me that I am out of the constituency a lot,” he said.

His team in Macroom and Ballincollig are his eyes and ears on the ground.

Although his wife, Sinead, and three children, Ruth (11), Odhran (10) and Darragh (6), are a major driving force for his political ambitions, he is also very conscious that his family time can be limited.

He stays in Dublin most days during the week, returning home usually on Fridays.

“But the type of commitment required in politics is very significant – I think the public sometimes doesn’t appreciate what it is every politician gives in terms of the sacrifices that are made. But we do it voluntarily and it wouldn’t be possible without a supportive family structure at home and I am blessed to have that,” he said.

“There are never enough hours in the day but that is the job; 14-16 hour days are the norm. I can survive on little enough sleep – six or seven hours is a luxury,” he said.

When asked where he gets his energy he said:

“Oh Christ I never had the impression that I was hugely energetic. The job drives you on; there are always issues to be grappled with; briefs to be read; people to meet; that is exciting in itself. I haven’t grown tired of that; it keeps me going.

“The kids are great; they keep me grounded. Occasionally I get to see what they are up to – football, hurling, athletics, soccer, drama, school plays – they are involved in everything.

“I couldn’t do what I’m doing if I didn’t know that Sinead was at home; she keeps a great show on the road. She gets the big picture,” he said.

Today, Creed will take the lead at home in the kitchen, where he will cook Christmas dinner for his family. “Nothing fancy – meat; two veg,” he laughed.

He is looking forward to the year ahead.

“The big issue in this department is Brexit; running parallel to that is the whole issue of market access and looking for new markets.

“Obviously the other big issue on the horizon is the next round of the Common Agricultural Policy (CAP) and that is going to be really, really challenging.

It looks like we will be given greater autonomy and everyone says that’s great; but when you can no longer blame Brussels for being the architect of the policy, and it is our own policy, that will mean difficult choices.

The department intends to hold public consultations on the future shape of CAP in the new year.

“I wouldn’t underestimate the challenges and the competing voices who will have to be heard. It is inevitable that the central thrust of the next CAP is going to be around climate change. We will have to be able to say that ‘we invested this and we got that out of it’. It has to be that tangible; that black and white.

“If we don’t make progress on the big ticket items here we are going to be clobbered with very significant fines. We’re doing stuff but we need to do a lot more,” he warned, emphasising that dairy and meat processors also need to step up to the mark.

Despite the challenges he has overcome and the adversity that lies ahead, Creed has faith in his ability to steer Irish agriculture through the uncertain course ahead.

“I give it everything I have and, in due course, someone else will write the scorecard. I don’t wake up in the morning concerned about what people might say my legacy is; I just try to do my best every single day all day.

“I’m really lucky to be where I am; I value that opportunity every day,” he concluded.