A non-articulated loader: Kramer wheels out its biggest shovel yet

As its special highlight, Kramer rolled out its biggest loader to date – an all-wheel-steer machine in the 9-10t weight class – at last month’s Agritechnica show in Germany.

Unlike most competing loaders of this size (which employ an articulated-steering system), Kramer’s new KL60.8 has a rigid chassis with four-wheel-steering.

The KL60.8 is home to a new hydrostatic transmission; its main claim-to-fame is the hydraulic motor’s 45° swing angle. The transmission was apparently co-developed by Kramer. Top road speed is 40kph.

An “intelligent” engine speed reduction system – namely ‘Smart Driving’ – is part and parcel of the new drive-line. This adjusts engine speed – for example, to keep the machine moving at a constant travel speed while lowering engine revs (as and when possible). 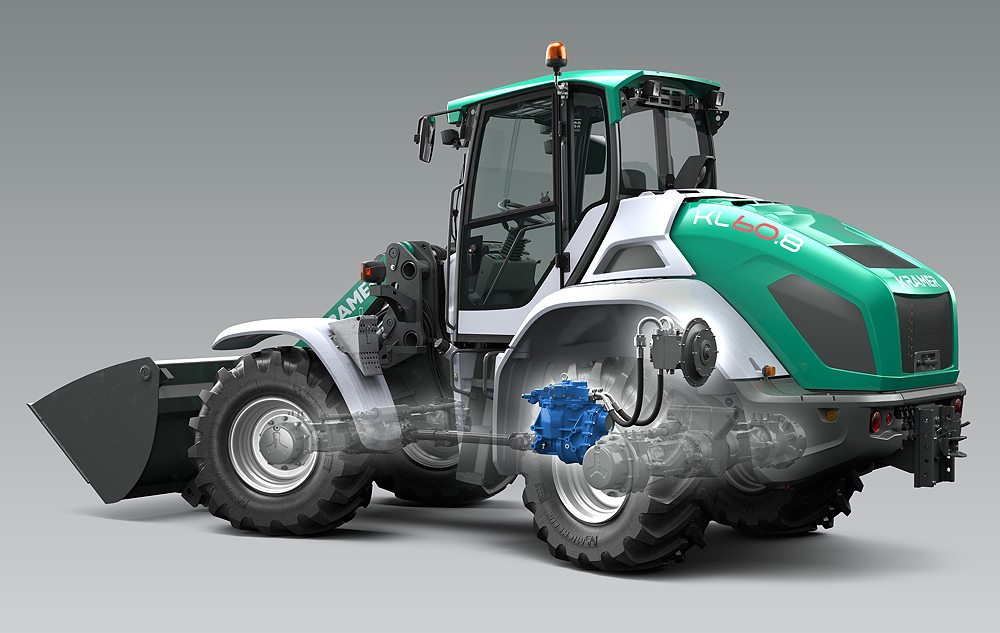 With the so-called ‘ecospeedPRO’ transmission, it is actually possible to reduce engine speed to just 1,550rpm while at maximum whack (40kph) on the road.

Hydraulic throughput is 150L/min – or 180L/min as an option. Maximum lift height (in standard guise) is almost 3.8m (to the bucket pivot point). An optional longer boom stretches this to 4.2m.

In addition to a 7in in-cab LCD display, air-conditioning and automatic-bucket-return are also standard. The machine comes with a reversible fan, four work-lights and a Bluetooth radio (with USB 2.0) too.

Green light: Deere and Kramer get the 'go-ahead' for major deal