The news of a Brexit trade deal agreement has led to some reassurance and support for the Irish beef sector as we are entering the new year. Beef exports into the UK will now avoid tariffs – which had previously been a major threat to cattle prices.

However, a factor that will impact rise in quotes at the beginning of January is that supplies in cold storage destined for the UK market have been filled quite heavily in the past few weeks.

This week prices for cattle remain the same, with processors reduced to a three-day kill again.

As cattle supplies in most plants seemed to be filled, €3.75/kg is the general base price being offered for heifers; steers are being quoted €3.70/kg.

For the week ending December 19, there was a total of 35,840 head of cattle processed – which has experienced a weekly increase of 138 head. Comparing the to the same week last year, weekly throughput is ahead this year by 3,852 head.

This can be attributed to the ramping up of kills by plants as the possibility of a Brexit trade deal agreement was still uncertain. 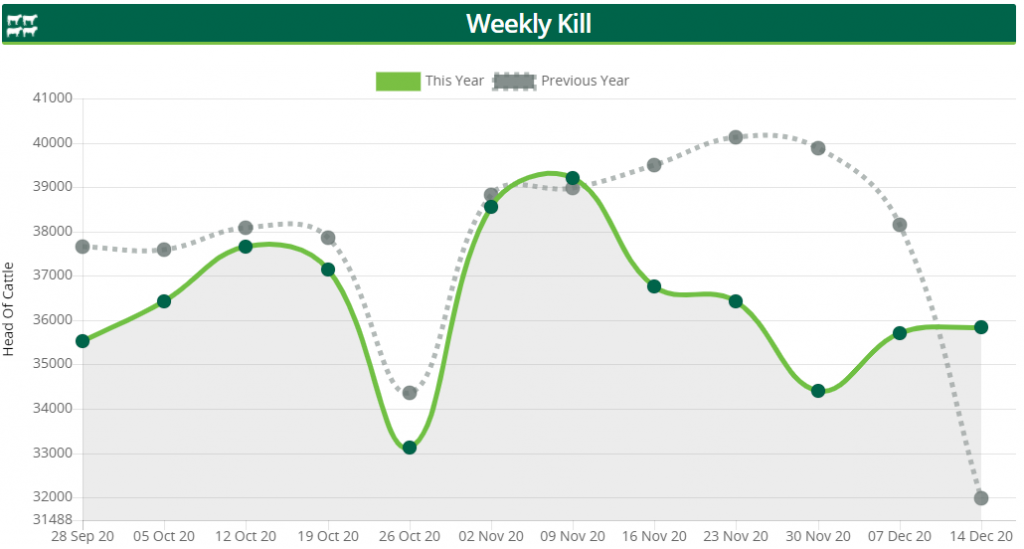 Young bulls had the most notable weekly rise across the categories, as throughput increased by 845 head to 3,899 head.

Heifer and cow slaughterings accounted for 11,215 head and 8,507 head respectively of the total weekly kill.