The much-publicised dispute within Beef Plan Movement shows no sign of abating. In fact, if anything, it appears to be deepening.

This follows recent reports whereby one side said that it had sent legal correspondence by the opposing cohort, after a very tumultuous period for the farm lobby group.

Meanwhile, a meeting has been organised for this Sunday, January 26, in the The Killeshin Hotel, Portlaoise, Co. Laois, which itself is proving contentious. One cohort is describing this gathering as an “EGM [extraordinary general meeting]”.

The other cohort, principally led by co-founders Eamon Corley and Hugh Doyle, is opposing the holding of this meeting.

The faction that is holding the meeting is largely led by several members of Beef Plan’s National Committee – which, according to Corley and Doyle, had been “stood down” earlier this month. The organisers have stated that the purpose of Sunday’s meeting is to iron out disagreements in the organisation’s Rules of Governance, membership registers and finances.

Advertisement
The “stood down” committee has also proposed to postpone county AGMs (annual general meetings) and county elections until after the meeting. It appears, at present, that a majority of counties have not held AGMs or elections, though nine counties have hosted meetings that have been referred to as ‘AGMs’ and ‘elections’.

The original date by which county AGMs and elections were to have been held was January 15.

However, the cohort that is opposed to Sunday’s meeting (and is in favour of county AGMs and elections going ahead) has proposed a new final date of February 15 – with details of AGMs to be finalised by this Friday, January 24. This cohort has also claimed that the meeting – planned for Sunday evening – is “not an official Beef Plan gathering” and that any business conducted at the meeting “will not be valid”.

However, the opposing group – which favours the holding of the meeting – contends that the purpose of such a meeting is to provide “accountability and transparency in relation to current issues in the Beef Plan Movement”.

“The National Committee of the Beef Plan Movement is not willing to allow an organisation, which has achieved so much on behalf of beef farmers, to be discredited and brought into disrepute,” the meeting’s organisers said in a statement, adding: “It is important that members make it their business to attend.” 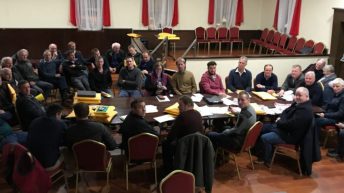