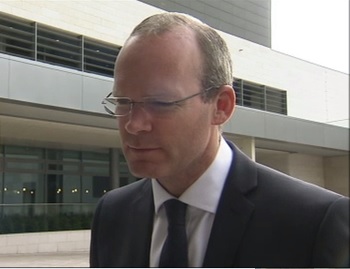 Markets for Irish beef have been described as ‘calm’ be the Minister for Agriculture Simon Coveney despite a suspected case of BSE confirmed on a Co.Louth farm last week.

Speaking in advance of a European Council meeting yesterday (Tuesday) the Minister stressed that this is an isolated case.

“They do happen and they happen in other countries as well at different times,” he said.

He said when you are moving away from an historic BSE problem there will be the odd isolated case that needs to be dealt with in a comprehensive and transparent manner. “Which is what we are doing,” he added.

Minister Coveney again confirmed that an investigation is underway and but declied to give an exact date of its conclusion.

In terms of Ireland’s animal health status that Minister said what the suspected case means is that we are back to where we were two weeks ago if we get reclassified back to controlled risk status.

He stressed that Ireland is currently exporting to 70 different countries under that status.

“People have a lot of faith in the Irish beef industry and they are right to have faith in it because it is a very safe very transparent and safe industry.”

The suspected BSE case in question was identified through the Department’s on-going surveillance system on fallen animals (that is animals which die on farm).

The animal involved is a five-year-old cow on a dairy farm in Co. Louth. The Department of Agriculture has said that the investigation will include an examination of the birth cohort and progeny of the cow involved.

It says confirmatory tests are being undertaken and results will be available in approximately one week. If confirmed, this will be the first BSE case found in Ireland since 2013.