Just off the M17 motorway, John and Patrick Shaughnessy are farming a suckler-to-weaning herd in Turloughmore, Co. Galway.

The current herd consists of 40 cows which are mainly commercial Limousin-bred, and are run on 42ha. They also had 250 Belclare ewes, but have now reduced that number to 100 in recent weeks.

After careful consideration, both John and Patrick came to the conclusion of converting their beef and sheep farm into a dairy enterprise. The farm’s herd of in-calf suckler cows are to be dispersed tomorrow (Monday, November 9) in Tuam Mart.

AgriLand took a visit to their farm to get an insight into how the farm had been operating and dive into the reasoning behind the enterprise change.

From viewing the farm’s overall layout of old traditional stone-walled paddocks and roadways – alongside the fine herd of cows and weanling groups – it certainly is an impressive suckler and sheep farm. 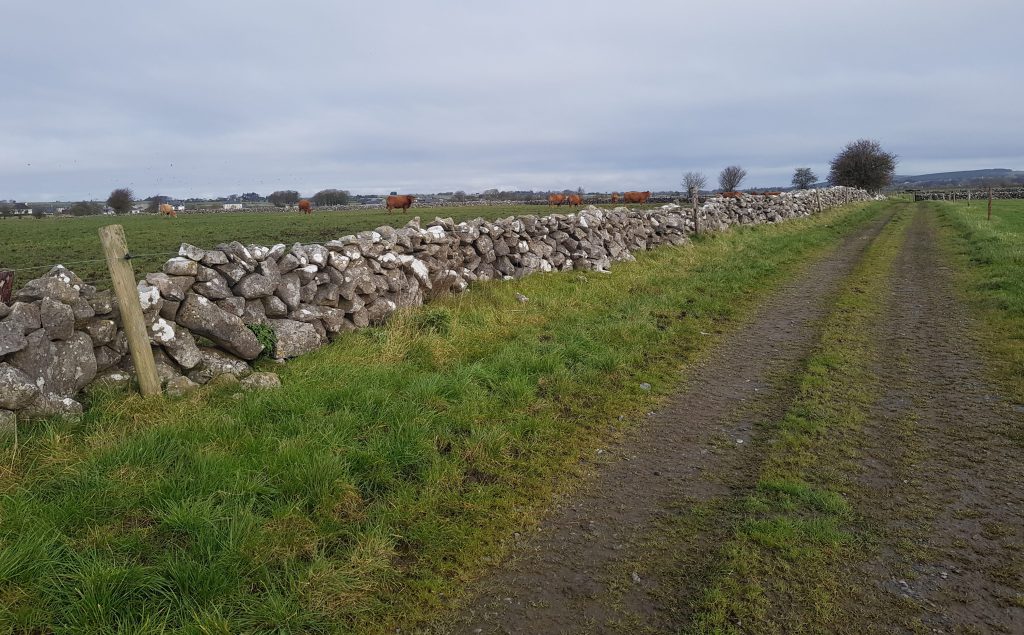 The farm began its suckler enterprise over 25 years ago with only 10 cows and, over the years, using both AI and stock bulls, the herd increased to the size it currently stands at today.

Patrick is the fourth generation to farm the land and is currently in a farm partnership alongside his father John. John works full-time on the farm, while Patrick tries to balance both his work life on the farm and another off-farm job doing maintenance.

The farm operates a spring-calving system and has achieved an average calving interval in reach of 370 days. The calving period used to begin on February 1 and ran until the end of April. 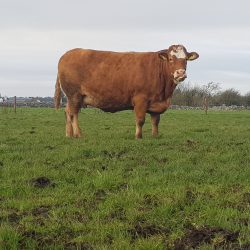 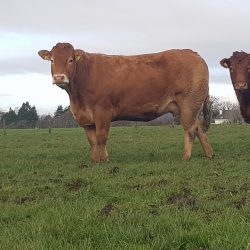 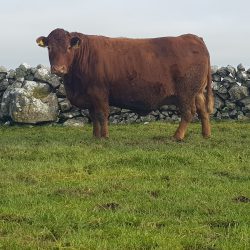 It is easy to spot that Limousin breeding comes to the fore in the suckler herd. Patrick stated: “Limousin is the way we have been going for the past 10 years.”

Belgian Blue is the predominant breed of sire selected to mate with the herd – having achieved great success in recent years breeding quality E and U-grading calves from their cows throughout the years.

Both Patrick and John explained: “We don’t have a lot of hard calvings; but we manage the diet of cows very carefully pre-calving. Obviously, with the ‘blues’ you are going to have the odd hard one, but you just have to keep an eye out for that. 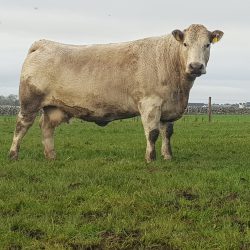 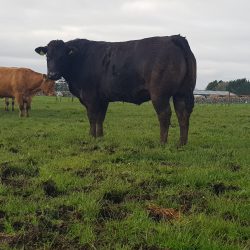 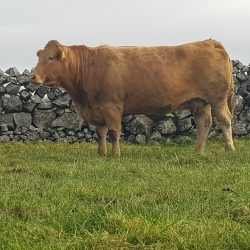 “Normally this time of year we would have them inside; we would grade them and body condition score (BCS) them. From that, we then separate them based on their calving date and BCS. The diets are monitored then and the cows are fed hay and silage.

“The cows are vaccinated with rotavec corona and against bovine viral diarrhea (BVD) and leptospirosis and are given a bolus in order to cover their necessary mineral requirements.”

Patrick was very quick to note the “very good docility” of the herd and the simplification it brings to the AI season by having cows that are quiet.

The farm does not run a stock bull in the herd and, instead, the focus is placed on 100% AI – with a vasectomised bull, having a chin ball attached, used for heat detections.

Belgian Blue sires are predominantly selected to use on the Limousin-bred cows, with the Simmental cows given a Charolais sire at mating. Heifers are bred to both Angus and Limousin sires. 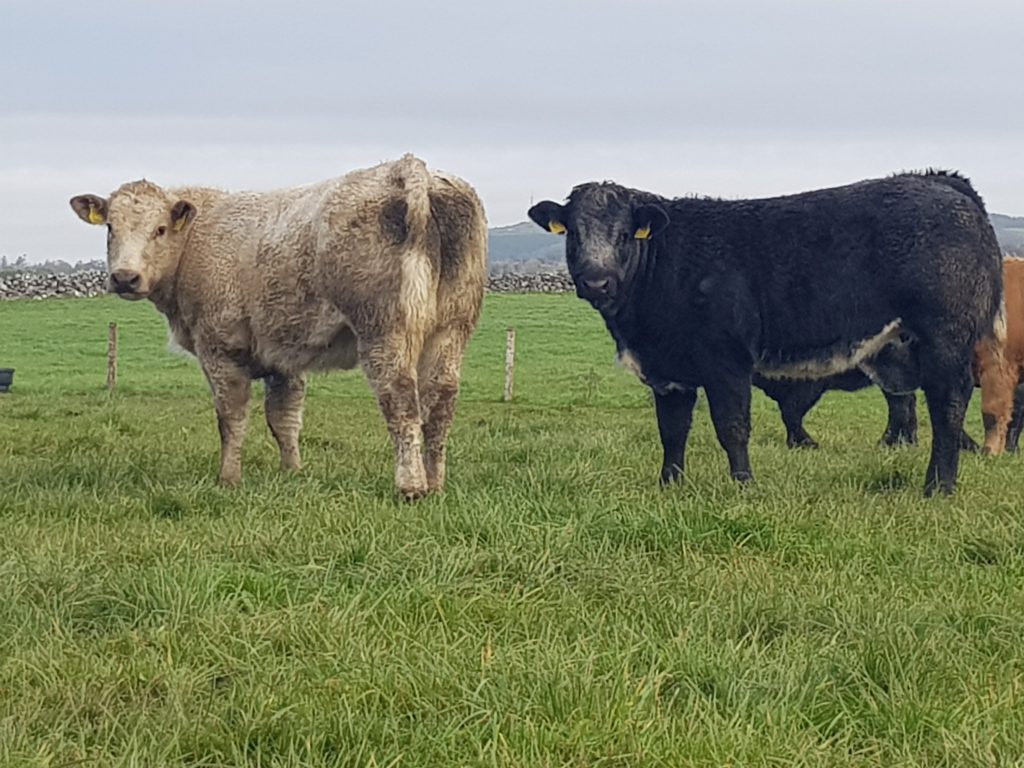 Down through the years, ‘blue’ bulls such as Ballyfin Borat (BBQ), Sultan (STQ), Herbert Vd Noord Wateringshoev (WBH) have been used, while the Charolais sires include Hollowtree Nickolas (HWN) and Pottlereagh Mark (CH4160).

Sexed semen is also used successfully in the herd, with “very good conception rates achieved”, according to Patrick.

Limousin sexed-semen is selected for the most fertile and more milky cows to try and breed replacements. Bulls like Castleview Casino [CWI], Elderberry Galhad [EBY] and Palmares [PAM] have been used on a lot of our cows.

“The more Limousin breeding we can get into our females, [results in] the better Belgian Blue-bred calf they will have and calves will have the right colour.” 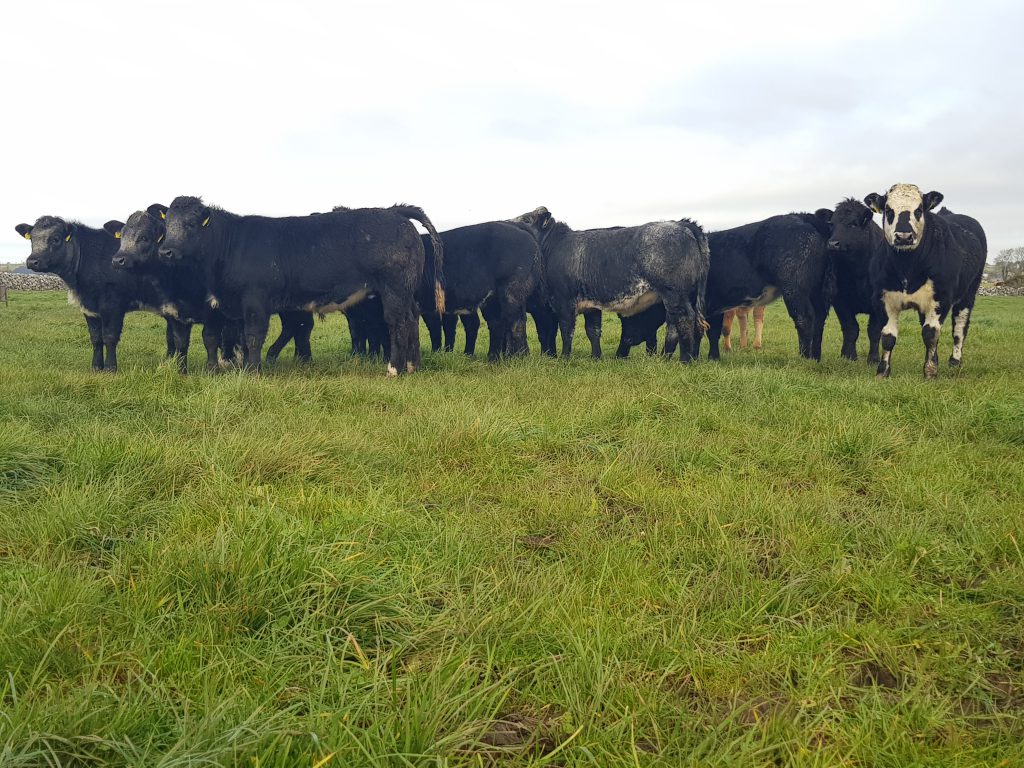 The herd has not bought in any replacement heifers in recent times, with Patrick stating: “It has probably been eight or nine years since we have bought in anything.”

A strict culling policy is enforced on the farm especially when it comes to fertility.

“We breed for three months and once the final day comes we just stop. If the cow is in-calf she stays, and if she’s not, the cow is gone.”

The farm sells all its spring-born weanlings at home in the month of November, with the majority of purchasers every year consisting of both exporters and farmers.

Repeat custom is achieved year-after-year, with the high health status of the weanlings being a key factor. 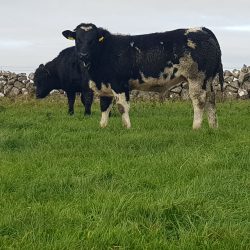 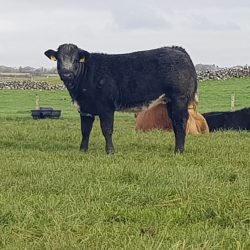 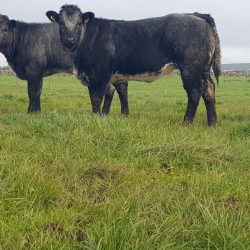 The target weights for bulls at selling is around 370kg, while the heifers are considered at a slightly lower weight of 350kg. 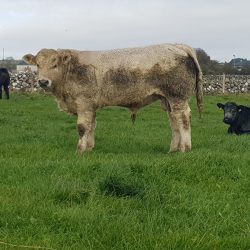 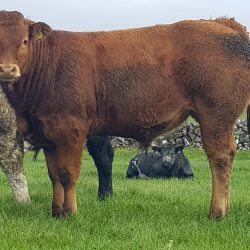 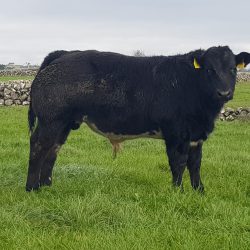 A focus on achieving high reproductive and efficiency targets within the herd aided the farm’s participation in the recent suckler-based schemes in recent years. The suckler herd was involved in the Beef Data Genomics Programme (BDGP) since 2015.

Patrick explained how participating in the scheme involved no changes to the herd’s breeding program as they always had high Replacement Index females:

We were always well above our targets. It really involved no effort; we didn’t need to change anything and we just kept doing what we were doing. 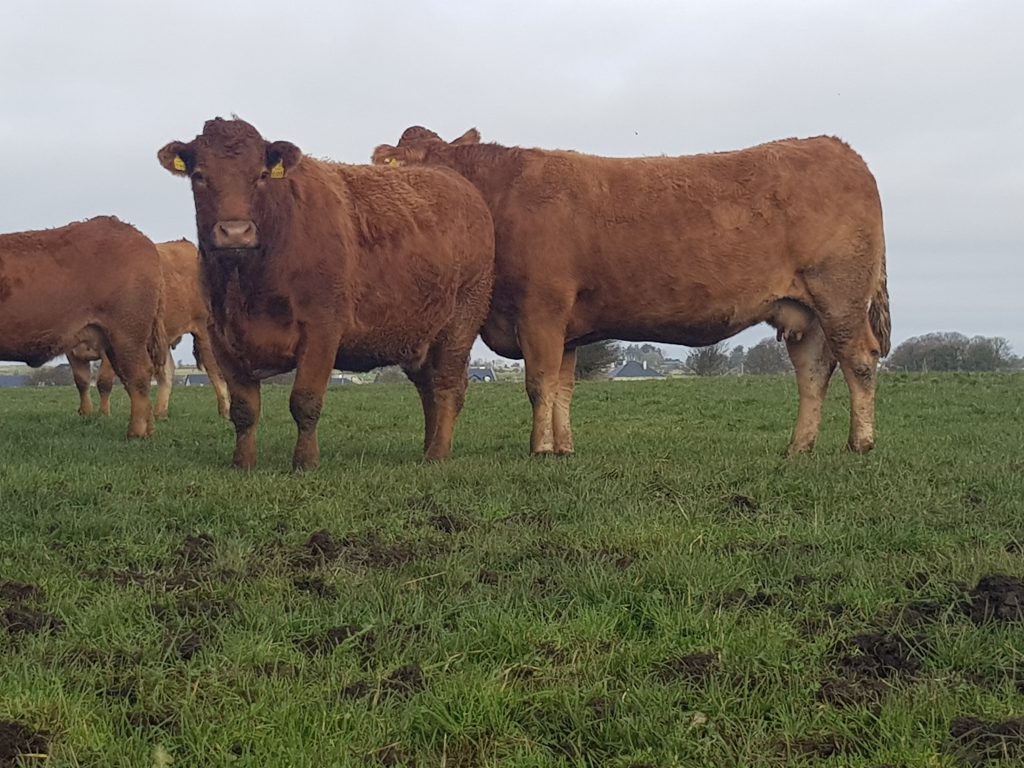 Again, little or no change in farming practices were noted during their participation, as the cows and weanlings would have been regularly weighed on farm and have weights recorded for the past 12 years.

The farm had also been previously dung sampling its cows, prior to the scheme, in order to monitor the herd’s fluke status.

“It was great we were getting paid to do it. We couldn’t understand any farmer giving out about it – because for us it was a simple job really,” according to Patrick.

The farm has focused on having Belclare breeding in their ewes over the past 30 years. They have recorded very high prolificacy rates at both scanning and lambing times. The farm also retains its own ewe lambs as replacements to avoid having to buy in additional ewe lambs.

John and Patrick stated: “We would have a very prolific flock, we scan well over 2.2 lambs per ewe and then wean more than 1.8 lambs, if not more.

We actually had to introduce a Suffolk ram into the flock two years ago, because we nearly had too many lambs out of all the ewes we lambed. Out of 200 adult ewes, we had almost 62 triplets and only about 23 singles last year.

John went on to say: “Some people think we are mad, but the more triplets we have at scanning, the happier we are. We just love the idea of having loads of triplets. We like the challenge of transferring lambs onto ewes with singles or doubles that are more fit to rear a triplet.

“If we can transfer all this effort into a dairy system we expect to have a better living out of it.”

Following the sell-out, the farm is planning to convert to dairying, with 100 maiden heifers planned to be purchased in the coming spring. Milking should be underway on the farm by spring 2022. 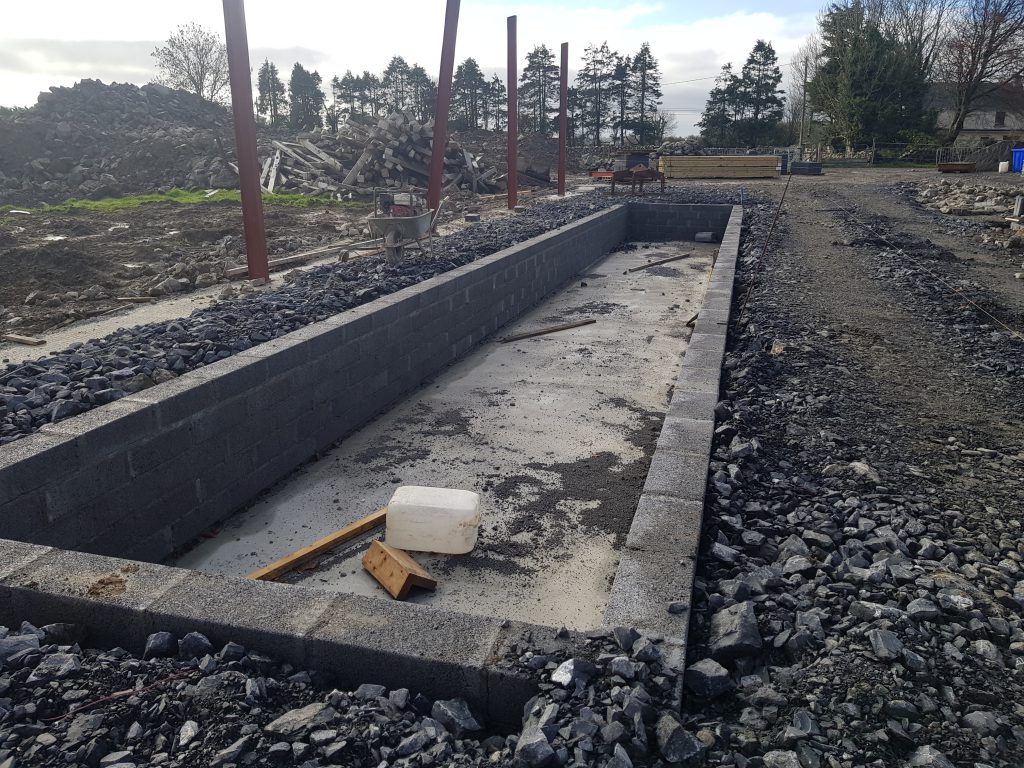 Commenting on the reasoning behind this move, Patrick stated: “Well we are a long time talking about it, there seems to be a brighter future in dairying.”

John supported this by explaining:

We feel that if we put in the same effort into dairying, we will have more time off than we have at the minute. It’s a busy time lambing 250 ewes and 40 cows calving in the spring. We also have a lot of different grazing groups to try and manage as well.

Patrick concluded: “It will be a very sad day to see the cows go, but once they are going to a farmer that will appreciate them and their value, we don’t mind.”