Prior to making the switch to organic beef production, the Dunnes ran a flock of 200 ewes and purchased weanlings and sold them on as stores.

Unhappy with the performance of the farm, coupled with some years of low net margins, the sheep were phased out and a suckler herd of 35 cows was built up – with all offspring brought to finish. Some additional stores were also purchased and finished on the farm.

Tom Dunne started looking into the prospect of organic beef production and soon realised there was an opportunity to improve the overall financial position of the farm.

After two or three years of “hymning and hawing”, the farm entered an organic conversion in 2008. 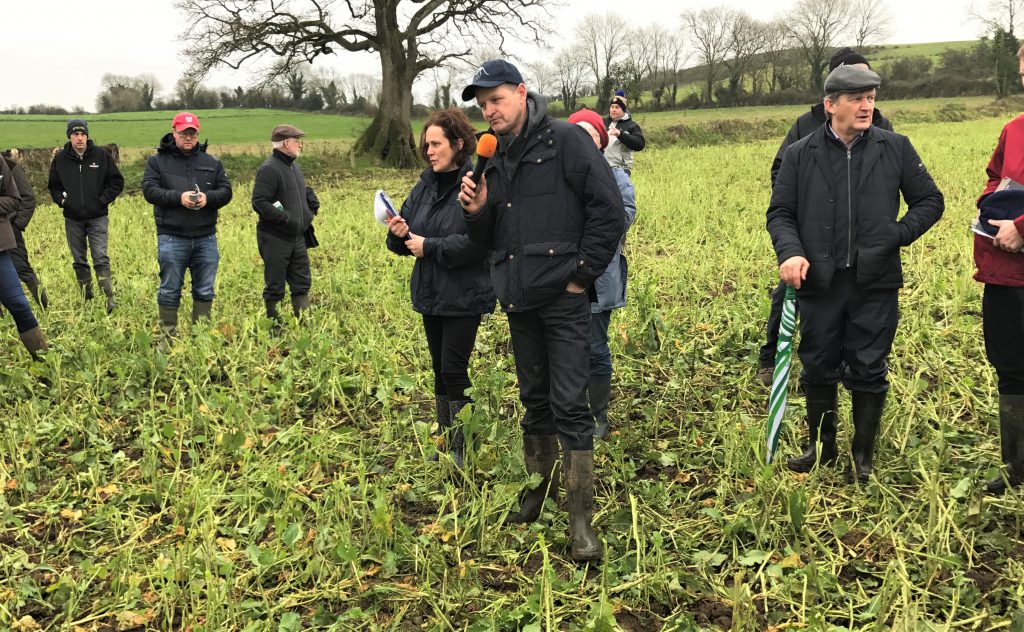 “One of the things that slowed my decision down was what will my neighbours think. There might be a few extra nettles and thistles here and there, but it was a change I was very proud I made.

I feel like I’m doing a good job, but I’m sure there’s some room for improvement.

“I’m involved in organic 10 years next March and it is probably one of the best farming decisions I made in my life,” he explained.

The total farm area is 47.2ha. This is made up of 34.3ha, which is divided into two blocks around the farm. An additional 12.9ha is rented and is located approximately 15km from the home farm.

This year, a number of different crops have been grown on the farm. Dunne is involved in a crop-share agreement with another horticulture producer.

4.23ha have been given to this producer where he grows carrots. In return, Dunne makes 8ha of silage on the other farmer’s land. 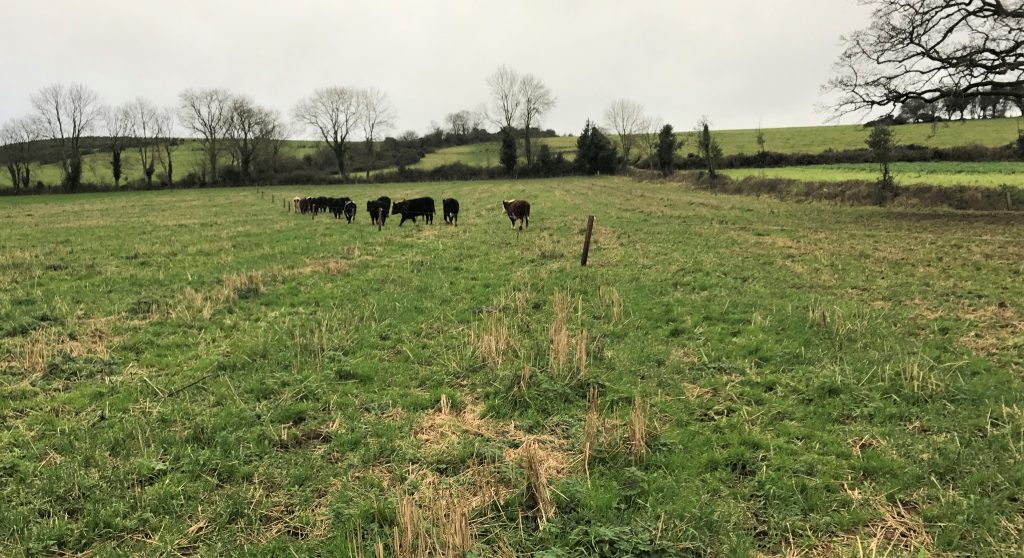 Permanent pasture takes up the bulk of Dunne’s grazing block. A total of 28.37ha are allocated to grassland, while combicrop takes up approximately 8ha. This crop is a mixture of spring wheat and spring peas.

Crop rotation is the key to successful organic crop production. The rotation method provides the necessary crop nutrients and plays an important role in the control of pests and weeds.

When the husband-and-wife team made the conversion to organic farming, all cereals and concentrates were purchased. It wasn’t long before they realised the expense of this process.

Crop rotation is implemented on the farm to supply all cattle with the required feeding.

“The end goal for me is to phase out the combicrop and have 80ac of a rich white clover based sward. After all, everybody know that grass is the cheapest feed,” he explained.

“Five years ago we moved to an all finishing system. Buying cereals and importing rations are all dependant on currency,” he explained.

“We spent the first five years learning and the next five years putting what we learned into practice.

We now produce all our own feed with a little help from a local organic barley grower. We are growing it ready to use for about €140-150/t.

Using rape as a winter feed

In August of this year, ‘Sprint’ was planted. It contains 70% organic seed and two forage rape varieties – ‘Sparta’ and ‘Interval’.

Rape is the start of the rotation for Dunne. It also fulfills a Green, Low-Carbon, Agri-Environment Scheme (GLAS) measure for the farmer. 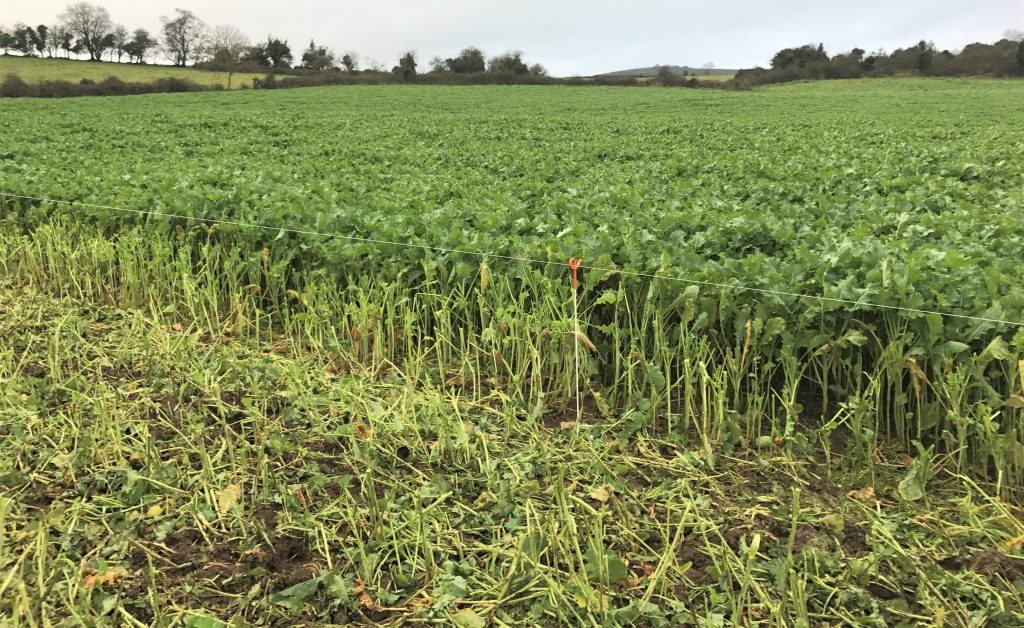 Dunne added: “It helps bring on the fertility of the land and it is used as an out-wintering crop for 20 cattle.

It breaks up the soil and gets it ready for the grain crop the following year.

“When it grows thick, it suppresses weeds. I move the wire approximately every seven days. The cattle will also get a bale of hay this year. I expect the cattle to thrive marginally, but not extensively,” he said.

“Last year, the rape crop was six inches higher and I got until March 10 and the cattle went to grass after that. It will all depend on the weather this year. I will be hoping to go straight to grass again this year.”

Dunne has been sowing a combicrop since 2015. On April 20 of this year – when ground temperatures allowed – the 70% organic combicrop ‘Prime’ was sown. This is a mixture of spring wheat and a combinable pea seed.

It was sown at a rate of 90kg/ac and harvested on September 2. It was then crimped and pitted and is used as part of the winter diet for the cattle.

“This year we had a great crop. We had predicted a yield of 2.5t/ac, but unfortunately with the conditions we experienced during harvest, we were lucky to get 1.9t/ac.

“I’ve tested the crop every year. In 2015, it was 17.5% protein and last year it was 16% protein. This year, we have two tests done and we are awaiting the results from a third.

“The first one came back at 20% protein, which we thought was too high, and the second was 13%. The third test will be the decider.

“I get about six bales of straw per acre and I’m told the pea straw is very good in the diets for animals,” he laughed. 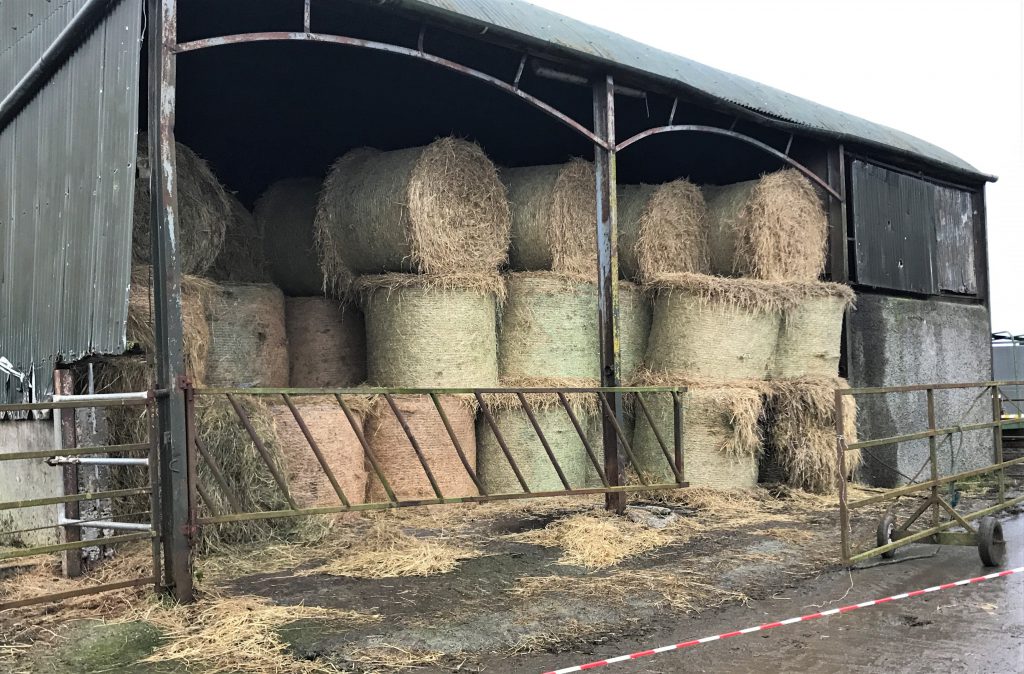 Animals are grazed in two groups during the grazing season on the farm. Permanent grass and white clover swards are a vital component of Dunne’s farm.

“There is no doubting red clover and how good it is. But for me, from a grazing perspective, it doesn’t fit in that well. My experience of red clover – for the little bit I did sow – didn’t work out so well. Maybe I over grazed it, but for me white clover is better,” he explained.

Two cuts of silage were harvested on June 2 and August 1. 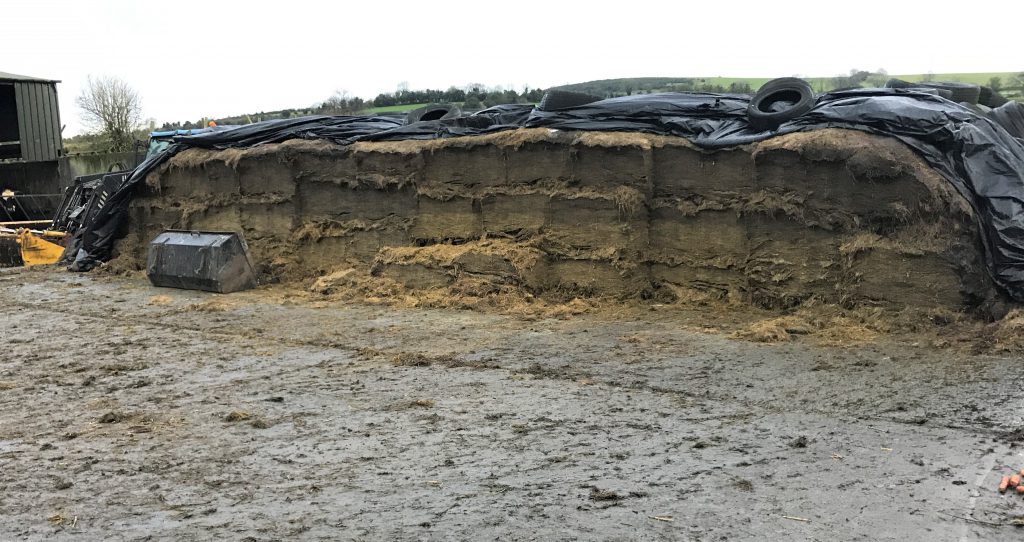 “In relation to silage, this is a tough year. I was quite lucky. Since I started testing silage, the silage tested the best this year. My first-cut silage was 75% dry matter digestibility (DMD) and my second cut was 72% DMD.

One added advantage is that organic grass is not as heavily as fertilised grass. It dried out quickly and we mowed it and picked it up rather quickly.

Dunne uses nutrients in the form of slurry, FYM and imported dairy sludge to feed his grassland. The sludge is a by-product from dairy processing and is sourced locally from Glanbia in Ballyragget.

Slurry and FYM is used from the over-wintering of animals. All nutrients are spread rationally around the farm, based on what crop is being sown. They are also spread on the farm based on the soil sample results. 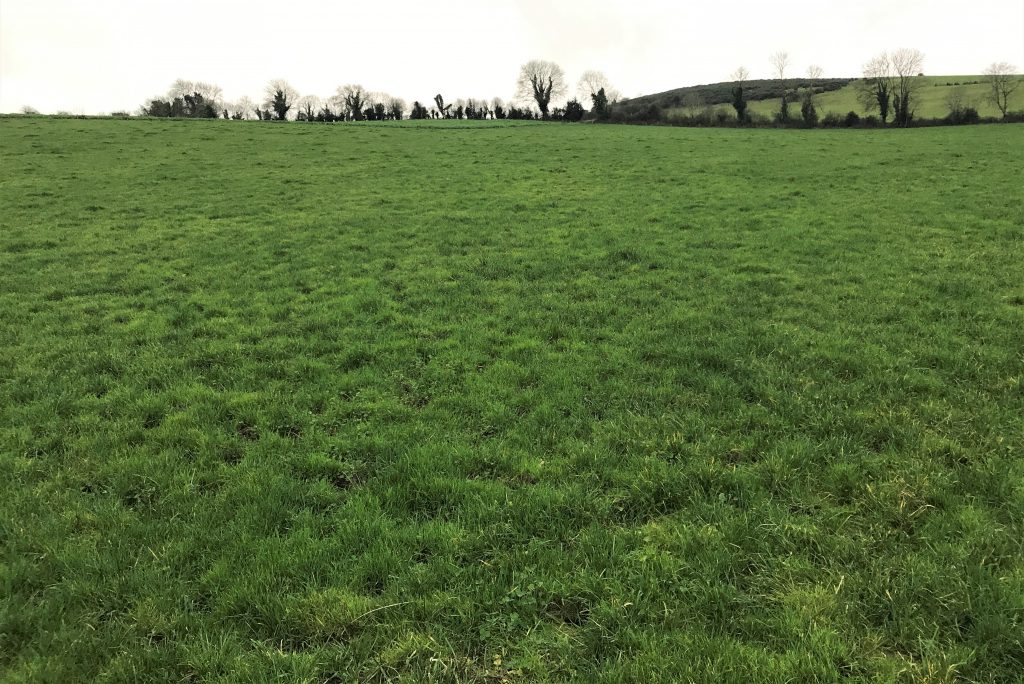 Generally, Dunne spreads granulated lime based on soil sample results. FYM is normally spread before the forage crop is planted.

“Out of all the challenges involved in organic farming, this is the biggest challenge – nursing and nurturing the soil. We can’t tip down the road to the local co-op for a few bags of artificial fertiliser.

We are totally dependant on the slurry, FYM and the dairy sludge. I try and stay away from buying in products.

Animals are bought as stores in autumn and yearlings are purchased in the springtime. Approximately 60 cattle are purchased in September or October and another 30 in April when the grass starts to come.

All animals purchased are steers. All cattle are sourced from other regionally located organic drystock producers.

I source all my cattle from four farmers. We understand each other and we have a system that works well. I have no problem getting cattle.

All the cattle are sold on a flat rate to Good Herdsmen and slaughtered in Clones, Co. Monaghan.

He added: “My carcass weights are up around 360kg. I know the guys in Good Herdsmen would probably like them around 330kg, but the farmer has to have 40-50kg for himself. That’s where I see the profit for the farmer.” 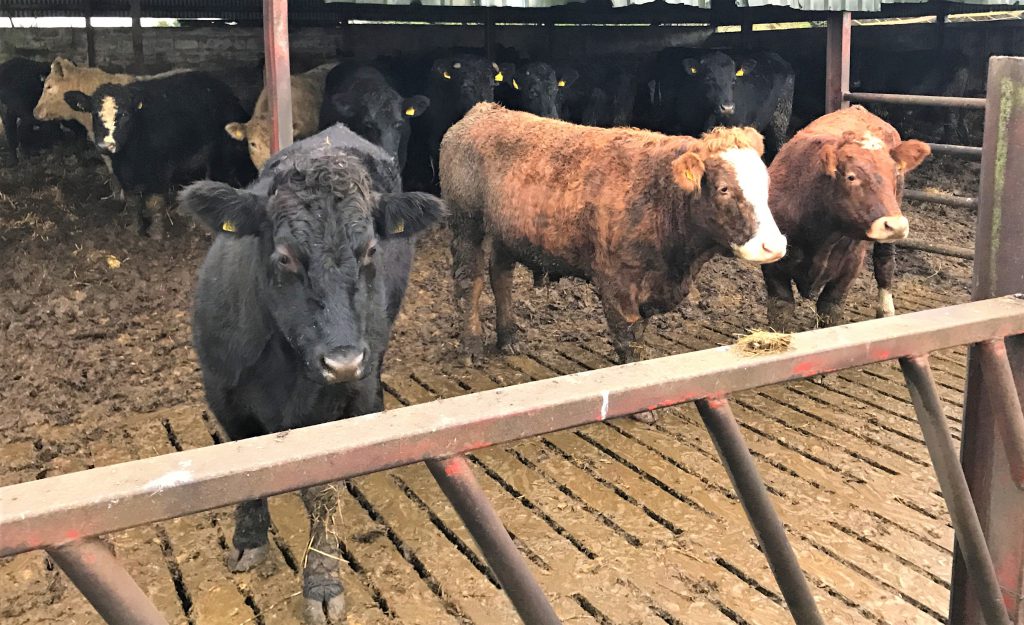 The yearlings that are bought in the spring come in at approximately 420kg.

The winter diet for these animals consists of 30kg of grass silage(fresh weight); 0.8kg of combicrop straw; 4kg carrots; and 2kg of combi grains (wheat and peas). The total diet protein is 14.8%.

Some people may wonder why I have a diet feeder with the small numbers of cattle. This is my third year using it and I would even say it’s the best machine that came into the yard. 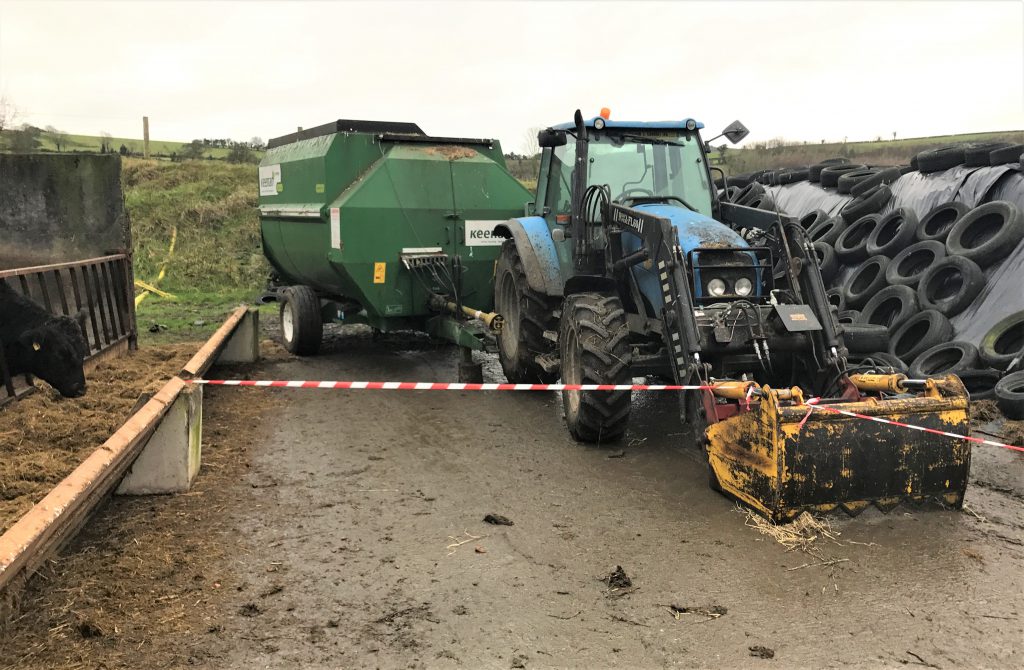 “The majority of my forward store cattle will be fit for the factory next April or May. It is unlikely that any of them will see grass again,” he explained.

The store cattle were housed on November 1 and are currently doing 1.2-1.3kg/ADG/day.

“I weigh on a regular basis to follow individual performance. However, I don’t weigh as much as I used to solely because the cattle get sick of being weighed and going through the crush,” he said.

The finisher diets consists of 18kg of silage (fresh weight); 4kg of combicrop; 2.5kg barley; 4kg of carrots; 0.5kg of straw; and minerals. The cattle are normally on the finisher diet for 100-120 days. 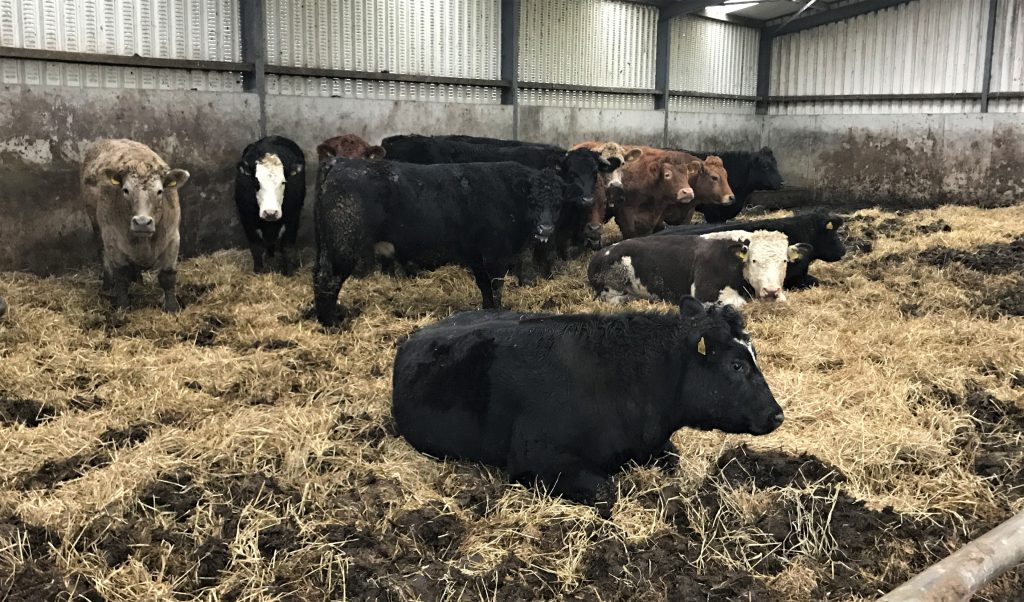 The overall health status of the Dunne’s herd is very good and veterinary intervention is very rare. Animals are occasionally treated for liver fluke.

“I usually go on veterinary advice or on the carcass report from the factory. I tend to buy the hardier cattle because they are more resistance to disease,” he said.

The finishing cattle have been treated for lice once and the backs of the animal are clipped in order to achieve a better contact. It also helps to stop cattle sweating during milder weather.

The withdrawal period is what organic farmers need to look out for. It is normally treble the normal withdrawal.

Organic beef farming systems are no different to any other enterprise. The returns from the farm must be greater than the costs of production.

Currently, the stocking rate on the farm is 1.27LU/ha. There is a lower stocking rate on Dunne’s farm compared to the average of the Teagasc non-breeding farms. However, he has a higher gross margin, which sits at €798/ha.

This can be mainly attributed to lower costs of production and a higher market price for his organic product.