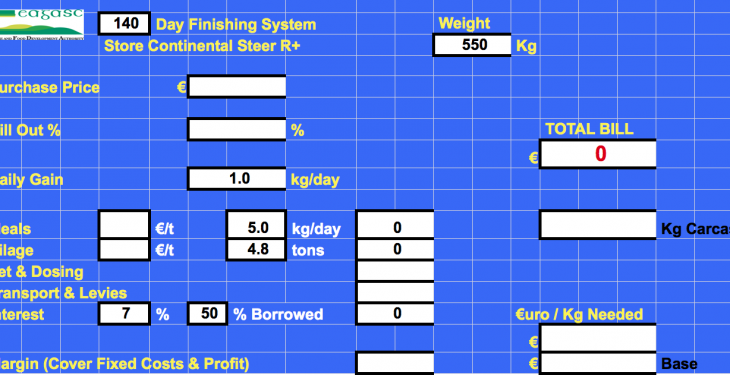 The interactive budget which was filled in by the audience at the Teagasc beef finisher meeting.

The prices beef finishers need for cattle are sobering, according to Teagasc, and no matter how efficient you are, if there is no price, you’re in trouble, Terry Carroll said.

At a beef finisher meeting in Kilkenny this week, Terry Carroll, Drystock Advisor with Teagasc Kilkenny brought out four bullocks to the 450-strong audience in Cillin Hill Mart. The audience priced the bullocks and then the costs of finishing them were discussed.

“We did an interactive budget. We had four bullocks there and priced one of the bullocks which were 550kg continental R= grade. The floor agreed on €2.10/kg (€1,155) as a purchase price and than a gain of 1kg per day would be the target for 140 days, which would bring the animal in at 690kg at slaughter and it would kill out at 55%. That would mean a DW of 380kg.”

According to the interactive budget, the costings put in to achieve that were 5kg of meal a day (€161) and silage of 4.8t (€144). Vets and dosing came in at €20 and transport and levies €50 and a further €21 in interest as the projections including borrowing half the money to buy the bullock.” Terry said that the final two things on the beef budget were the fixed costs. “Sheds and diesel are not free, so we put in €50 for the bullock for the winter period and we wanted to have €100 profit to do this over fixed costs.”

The end results needs to come into €1,701 in the factory to give you that €100 profit, he said, and that means farmers need to be getting €4.36/kg on the pay cheque and that if we assume it is a QA farm and complies with movement and age, that would give you €4.48/kg.

“That was a sobering figure for people. They know the price has to go up a good bit, but that’s not an exact figure, so we wanted to give them an exact figure. We’re at €3.60 and farmers are angry.”

He also said that there is a lot of debt on beef farms. “Farmers are finding it hard to pay their bills. Banks wont be firing money at farmers to buy cattle, so it’s a tricky situation at the moment. The price of beef has broken some men both financially and confidence wise and its hard to rebound. All the figures seem to suggest that cattle will be a lot tighter next spring but its a gamble that the prices will be there.”

However, he said enterprise itself is full of gamble and he questioned whether it’s fair that people have to gamble year in, year out at such an enterprise. “But that’s the reality.

“It looks to be strengthening at the moment, but going up 5/10c is not going to save the day for anyone.”