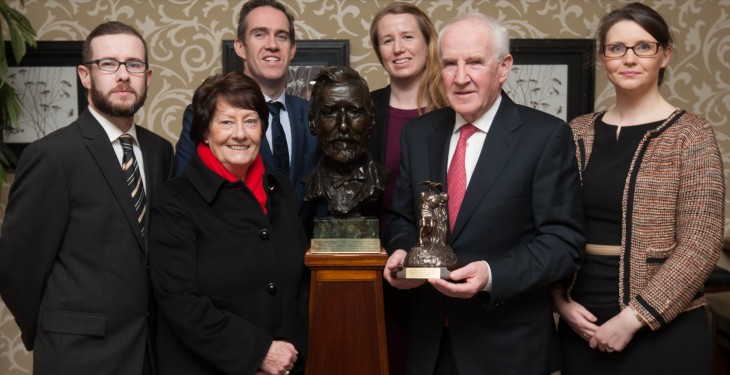 Gus O'Brien is pictured with his wife Margaret and their family Daragh, Kieran, Una and Suzanne.

The outstanding lifelong contribution to the Irish co-operative movement by the former CEO of Bandon Co-operative, Gus O’Brien, has been recognised nationally by the industry’s highest honour – The Plunkett Award for Co-operative Endeavour.

Gus joined Bandon Co-Operative as a young dairy science graduate in 1969 and has fulfilled many important and influential roles where he is now Secretary to the Board of the Co-operative, having also served previously as CEO. In that time he has been an essential and pivotal force in the development of Bandon Co-operative and a major contributor to the business of co-operation throughout Ireland.

For over 40 years, Gus has been a key presence in the remarkable business evolution of Bandon Co-operative. During this period, far sighted investments were undertaken in partnership with sister co-operatives Barryroe, Lisavaird and Drinagh including the buyout in 1991 of the Express Dairies interest in Carbery Food Products where Gus O’Brien was also a director. That business is an exemplar of Irish food innovation with an expanding global footprint, notably in the protein and food ingredient sectors.

He was also the driving force behind the acquisition by Bandon, Barryroe and Lisavaird Co-ops of Clona Dairies in 1989 which strengthened the Dairies’ collective position and supported a rapidly implemented programme of food product development.

Presenting the award, Bertie O’Leary, President of the Irish Co-operative Organisation Society (ICOS) said Gus O’Brien has been an incredible asset to the co-operative movement throughout his entire career.

“His dedication, attention to detail and professionalism are the hallmarks of his approach to everything. He has a flair for business innovation that is matched by his sense of duty to his community. He is held in the highest esteem and he is exemplary of the best characteristics and ideals of co-operative endeavour.”

Dermot O’Leary, Chairman of Bandon Co-op said Gus O’Brien’s business philosophy has been informed by a belief in the application of co-operative principles to achieve strategic business objectives.

“His broader contribution to the West Cork community is truly exceptional. He personifies all that is best in the ethos of the co-operative movement and he understands and deeply values the connection between co-operative enterprise and community wellbeing. We are delighted to see him honoured with this prestigious national award.”

His achievements for Bandon Co-operative reflect an exceptional dedication and contribution which is also reflected in his immensely positive engagement over the years in a host of other community based groups and initiatives.

These important community roles have included committee positions with Bandon Macra na Feirme and Bandon Boy Scouts. He also served as Chairman of the Board of Management of Crossmahon National School and was a founding member and former President of Bandon Chamber of Commerce.

Appointed Operations Manager of Bandon Co-operative in 1974, O’Brien drove the expansion of the co-operative and the broadening of its business base. He was instrumental in the purchase of a 26 acre site in Kilbrogan and a 26,000 square foot building from US Company, Jacobson Fasteners. This opened the door for a series of new business activities for the Co-operative including grass seed, fertilisers, grain storage and grain drying.

The forward thinking and innovative approach that Gus O’Brien to his work was also highlighted when, in the 1980’s, many farmers found it difficult to generate revenue as a result of milk quotas. Innovatively, he spearheaded a search for an alternative income source to dairying, including successful onion and rape seed growing programmes.

He was also involved in the establishment of an agri-store which sold feed, fertiliser and seed at Kilbrogan in 1984. This was the Co-operative’s initial foray into large scale agricultural, hardware and household retail activities with modern day shops in Kilbrogan, Kinsale and Enniskeane. This retail footprint was further consolidated by expansions of the three retail facilities in the 2000s.

In 2001 he became General Manager of Bandon Co-Op. His determination to continue Bandon’s growth became evident through the launch of Bandon Vale Cheese in 1995. He also drove the successful establishment of the Fuschia Brand for West Cork produce. In 2013, Bandon acquired the assets of Henry Good Ltd in Kinsale. This initiative restarted grain intake, drying and milling on the site and restored a key element of agricultural infrastructure for local farmers and businesses.

The Plunkett Award is the premier honorary award made by ICOS annually. It is presented to one individual each year who is regarded as having made an outstanding lifelong contribution to the co-operative movement in Ireland.