ICOS has also confirmed that Michael Spellman has been elected Vice-President designate both men will take office from January, 1, 2015.

As President designate, Mr. Keane will succeed Bertie O’Leary who has served with distinction as President of ICOS since 2012.

He is a former director of Co-operative Animal Health Limited. He is also a director of ICS Europaks and is the current Chairman of Donaghmore Famine Workhouse Museum Co-operative Society. Martin is married to Margaret and they have 3 children. 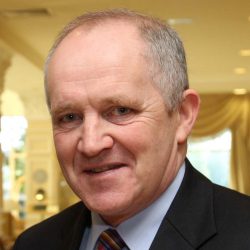 Michael Spellman is President of the European Association of Livestock Markets (EALM) which represents 14 national federations and over 600 livestock marts across Europe. EALM marts are responsible for the sale of about 35 million cattle, sheep, pigs and horses annually.

Currently in his second term of office as Chairman of the National Marts Committee of ICOS, he served as Vice-President of the European Association since 2012. From Kilteevan, Co. Roscommon, he is a Board Member of ICOS and of Roscommon Co-operative Livestock Mart. Michael is married to Marie and they have 2 children.