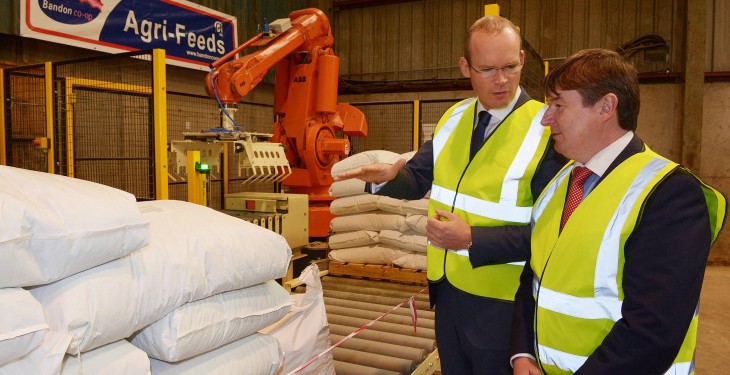 Bandon Co-op is to create 50 news jobs over the next three years, the Minister for Agriculture, Simon Coveney has announced.

“Founded in 1903, it was one of the first co-ops to be established in the region and it has grown to become a very vibrant organisation with three very successful business units – the agri-division, the retail division and the dairy products division.

“Bandon Co-op’s 255 milk suppliers have ambitious plans for future milk expansion and I’m encouraged to see the support base being put in place by Bandon co-op’s Board and management team in order to take full advantage of the post quota expansion,” he said.

The Minister said that the co-op now employs a total staff of 250 across its three divisions having created 40 jobs over the past two years.

Minister Coveney also welcomed the co-op’s willingness to explore new avenues to grow its business and add to its contribution to the local and regional economy.

The acquisition of this modern animal feed mill with its grain drying facilities, and extensive grain and feed ingredients storage facilities is just one facet of that.

“With this acquisition, Bandon Co-op now purchases in excess of 15,000t from local grain growers and plans are in place to make additional investments to further improve sustainability for customers and the environment,” he said.

Another new and different facet of the business is the acquisition by Bandon of a stevedoring license. This is a new venture for the co-op and has coincided with Cork County Council’s investment of €1.1m in Kinsale Pier.

Speaking about the importance of ongoing investment Bandon CEO Gerard Brickley said that this investment in its feed and grain operations is significant.

“We can now buy, dry and store in excess of 30,000t of harvest grain while ensuring that our expanding dairy farmers are well supported by a 100,000t capacity feed mill located at their doorstep to provide competitive and efficient bulk delivery across the region.

“The Kinsale facility gives us an excellent base to grow sales in our region,” he said.

Bandon Chairman, Dermot O’Leary stated that recent investments in the Kinsale plant represent an investment in the core business of the co-op and an expansion of our services to farmers.

“It is another step in the Co-op’s strategy to support the milk expansion ambitions of the co-op’s dairy farming members,” he said.