Both dairy and beef calf registrations have dropped in the months of October and November of this year, figures from the ICBF show.

According to these figures, the total number of autumn beef and dairy registrations have dropped on the same period of 2014.

Dairy calf registrations for the month of November have dropped by 30% or 4,157 head on the same period in 2014.

These figures also show that the total number of dairy calf births in October also dropped on 2014 levels with 16% fewer in the month of October.

Figures from ICBF also indicate that a similar drop has occurred in beef births, in November to date, these registrations are back by almost 7,000 head which is a fall of 38%. 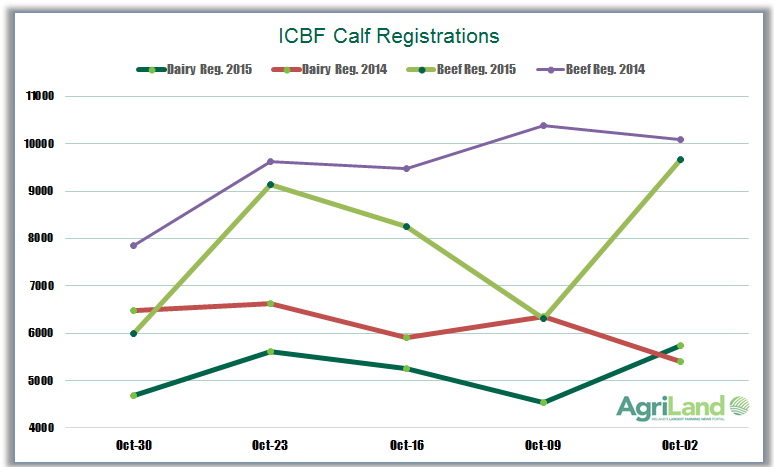 The fall in the number of calves born this autumn has occurred as winter milk producers make the switch to spring calving, according to Teagasc’s George Ramsbottom.

According to the Teagasc Dairy Specialist, recent data suggests that farmers are moving away from winter milk production due to the poor returns from the enterprise.

The data suggests that there has been a switch to spring milk by dairy farmers, there are more farmers moving away from winter milk production, he said.

Furthermore, he added, that total dairy births had also increased in the spring of 2016 which was bound to have impacted on the number of calves born during the autumn.

There were up to 100,000 additional dairy calves born in the spring of this year. This has been one of the causes of the reduction in numbers of calves born this autumn.

However, Ramsbottom added that there are two changes occurring in the dairy industry, the first being the change to spring milk while the national dairy herd is also increasing.

“Two things are happening in the dairy industry, the size of the national dairy herd is increasing and more farmers are focusing on spring milk production.”

Despite the reduction in the number of autumn calvings, he added that there may be a future in winter milk but only for the most efficient and best producers.

There is a future in winter milk production, but these farmers must be on top of their game. It is like all farming enterprises, the best operators will always do well, he said.