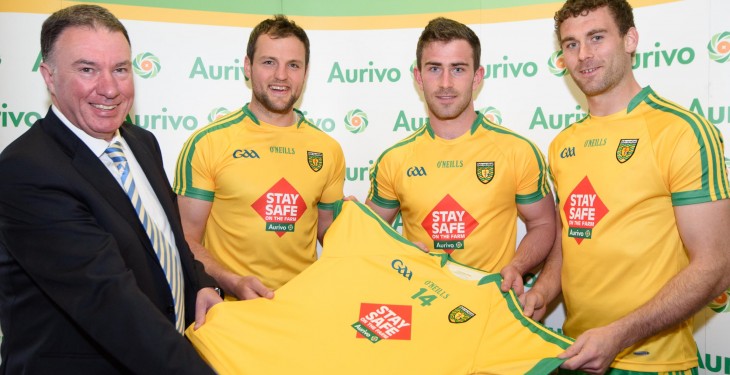 The Donegal Senior Footballers are to wear a specially commissioned jersey in their first championship match against Tyrone on May 17 to highlight the importance of farm safety.

According to Health and Safety Authority (HSA) figures for 2014, last year 30 people died on farms and Donegal had the second highest rate of farm fatalities in the country.

The logo of their jersey sponsors, ‘Donegal Creameries’, a consumer food brand within Aurivo Co-op, will be replaced for one game only with the ‘Stay Safe on The Farm’ logo, Aurivo says.

The initiative is also supporting FBD’s farm safety campaign, by including its Champions for Change logo on the reverse of the Donegal jersey, Aurivo says.

The Champions for Change campaign calls on agri organisations and farmers to stand up, stop taking risks and become a champion for change when it comes to cases of farm safety.

Chief Executive of Aurivo, Aaron Forde, said that one death on a farm is one too many.

“We have worked hard with FBD and the Health and Safety Executive for Northern Ireland to ensure we take a leadership role in promoting farm safety amongst our farmer owners.

It is our job as a large dairy co-operative to ensure that we raise the awareness of the importance of farm safety amongst our milk suppliers because 58% of fatal farm accidents happen on dairy farms.

“We are confident that the strong farm safety messages on the Donegal GAA jersey will help to highlight the importance of farm safety across the county to those watching the game in the stadium and at home,” he said.

“This initiative is a fantastic opportunity to promote safety in the farming community in our county and we are very happy to lend our support to Donegal Creameries and Aurivo in delivering this farm safety awareness campaign,” he said.