The latest AIMS data from April 1 shows the number of cattle aged between 12 and 36 months are down 181,000 head compared to the same period last year.

According to IFA National Livestock Chairman Henry Burns this confirms that the volume of finished cattle will tighten rapidly in the weeks ahead and should be back by 120,000-150,000 head over the next 12 months.

Burns slammed the move by some factories to lower beef quotes this week as designed to ‘destabilise’ the trade when numbers are tightening.

“All they are trying is to get another week’s supply at lower prices,” he said.

Cattle finishers cannot afford to part with cattle at anything less than last week base prices of €4.20 for steers and €4.30 for heifers.

After feeding cattle through an expensive winter, Burns said feeders are determined to hold off against any negative factory pressure on price. He said finishers are prepared to dig in and not part with stock at less than full value.

In addition, Burns said UK prices remain relatively strong with EBLEX reporting the R4L price at £346.80 for April 25. He said this is equivalent to €5.07/kg and compares to our average R3 price of €4.28/kg for the same week.

This is a price difference of 79c/kg or €276 per head between the Irish price and the price in our largest export market. 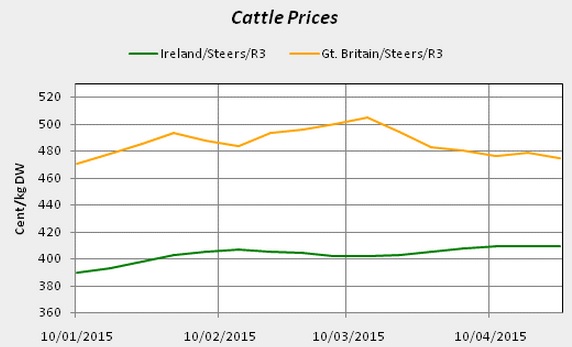 On live exports, Henry Burns said over 91,000 head have been live exported so far this year.