Organised by the Irish Angus Producer Group, the competition is run in association with ABP and Kepak.

The competition was officially launched at the first day of the National Ploughing Championships in Screggan, by the Minister for European Affairs, Helen McEntee.

Now entering its fifth year, the competition aims to encourage secondary school students to gain an understanding about the care and attention that is required to produce and market the highest-quality beef for consumers.

Participating students are required to set milestones through the lifetime of the animals, rear them through to slaughter and visit processing and retail facilities to understand how the food chain works as part of their Leaving Certificate Agricultural Science project.

Success of the competition

The success of the competition has been the source of huge delight, according to the General Manager of the Irish Angus Producer Group, Charles Smith

The quality of the projects and commitment of the students who have taken part over the last number of years has also been hugely impressive, he added.

It is wonderful to witness how the groups grow and learn about the role of Irish farming and merits of the Certified Irish Angus brand over the 18 months of the competition.

“We look forward to receiving entries from all over the country over the coming months and to presenting the next batch of successful finalists with their calves at next year’s National Ploughing Championships,” he said.

The project aims to allow students to apply the knowledge they learn in the classroom to a real-life setting.

As part of the competition, each of the finalists will receive the financial benefit involved in selling the animals to the processors on completion of the project. The winning students also receive an additional grant of €2,000 for their further education.

The Irish Angus Producer Group is currently seeking video applications from transition year students with a keen interest in promoting excellence in beef production to take part in the 2018 edition of the competition.

A total of 30 schools will be shortlisted to present their project ideas to industry at an event in Croke Park in March 2018 following an extensive interview process.

As a result of this, five groups will then each receive a number of Irish Angus cross calves to rear as part of their Leaving Certificate Agricultural Science project at the ‘Ploughing’ in 2018. 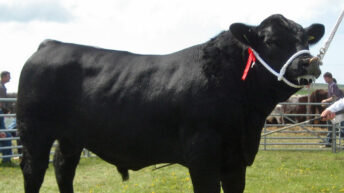