Last week saw another week where there was upwards movement in the prime cattle trade in the Britain according to EBLEX. It says that latest reports show that, despite numbers seemingly increasing in recent weeks, the all prime average was up 3p at 331.7p/kg.

It says this further uplift reflects a more positive trading environment in which the all prime average has strengthened by more than 6p/kg over the past three weeks. EBLEX outlines that with throughputs estimated to be higher, this price rise has evidently come as demand has improved, meaning the supply and demand balance has modestly swung in producers’ favour, with processors reportedly chasing cattle.

As such, it highlights that waiting lists have evaporated and price negotiations are reported to have been more favourable, even for cattle previously penalised for being ‘out of spec’. Consequently, while R4L steers levelled in the week at 343.2p/kg, the overall steer average increased 3p to 334.4p/kg.

EBLEX comments that while the short-term outlook may still indicate that the caution in trade has not dissipated entirely, particularly as supplies in Ireland are still running ahead of year earlier levels, the mid-term outlook continues to look more positive. It points to that British Cattle Movement Service data in July which shows the potential for only a modest increase in domestic supplies over the coming few months. However, it demonstrates clear signs of lower availability later this year and into 2015,which may have implications for the evolution of prices.

In Ireland last week, the cattle trade remains under pressure this week due to continued increased supply levels at export meat plants, according to Bord Bia. It also says that the trade continues to remain slow across our key export markets.

Bord Bia’s latest market update suggest that prices remained relatively steady last week. The majority of steers and heifers were purchased at a base price of around €3.65/kg on the Quality Payment System. These prices exclude the €0.12/kg bonus which is payable on in-spec QA animals. Prices paid for O grade cull cows are generally making between €2.95 to €3.10/kg.

Figures from the Department of Agriculture Food and the Marine show that cattle supplies at export meat plants for the week ending August 15 stood at around 30,500 head, which was 18% higher than the equivalent week in 2013. Cumulative supplies for the year to-date are running at around 112,000 head or 12% above the figures for the corresponding period last year. Throughput of prime cattle continues to be up over 15% so far this year. 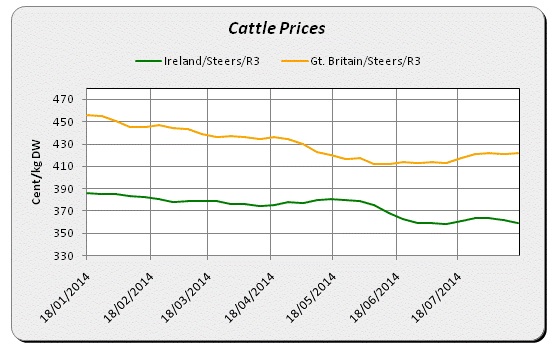