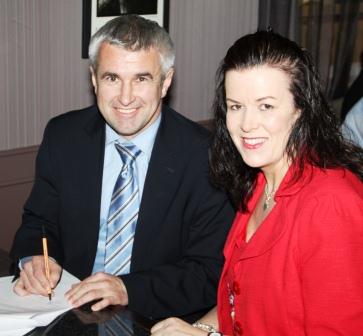 The executive committee of the World Ploughing Organisation (WPO) recently appointed a new general secretary. Anna Marie McHugh from Republic of Ireland is only the fourth General Secretary of the Association in its sixty year history and the first female to hold the position. She takes over from Hans Spieker of the Netherlands who vacated the position for career reasons.

McHugh was chosen as the successful candidate following a detailed process of election.  The position was advertised in December online and also through the 33 affiliate countries of the WPO. Interviews were convened in Amsterdam in February by the executive committee of the WPO with a shortlist of five people selected from England, Slovenia, Denmark, Ireland and Sweden.

“Such was the standard of all five applicants that each person would have brought something unique to the Organisation, however only one position was available and the decision was reached in selecting Anna Marie as the future General Secretary of the WPO for a term of five years,” the WPO said in a statement to AgriLand this afternoon.

The programme of work for the new general secretary is extensive as the organisation is experiencing a growth spurt despite its 60-year existence.  With potential new affiliates being identified year on year the job will involve liaising with all these countries throughout the year in preparation for the annual World Ploughing Contest.  This year Canada will host the World Event on 19-20 July in Olds, Alberta.

McHugh will be responsible for the day-to-day operations of the WPO, assessing future world venues, developing the organisation worldwide as well as heading up WPO communication and media relations.  She brings to the job a background in marketing and public relations having worked for the Irish National Ploughing Association for 19 years, she co-ordinated two world ploughing contests in her home country and is a former National Ploughing Champion (Ladies Category).

The main objectives of the WPO is to foster and preserve the art of ploughing and improve the skill of ploughing the land. The WPO supports and co-operates with other bodies and associations in the furtherance of these objectives.