Animal medication worth £11,000 stolen from vet clinic in the North

Some £11,000 (€13,119) worth of animal medication and vaccines has been stolen from Lurgan Vet Clinic in Co. Armagh, the Police Service of Northern Ireland (PSNI) has confirmed.

The theft reportedly occurred last Friday, April 14, and was one of a number of robberies that took place on the Banbridge Road on the same day.

It is believed that the theft at Lurgan Vet Clinic took place at around 4:40am. CCTV footage reportedly shows a light-coloured van pull up; two men wearing hoods and gloves were also spotted.

The thieves were only inside the building for about four minutes, a spokesperson for the PSNI has said, before making their getaway in the van.

On the same day, a theft was also reported at a farmyard close to the junction between Banbridge Road and Hall Road; approximately 4.5km away from Lurgan Vet Clinic.

A generator, angle grinder and rotavator were reported stolen. Meanwhile, a number of items, including a rock breaker digger attachment, a vibrating plate and a digger grab were also taken from the road-works at the Hall Road; just meters away from the farmyard.

It is believed that the rock breaker attachment weighed close to 400kg, which means it would have taken a number of people to lift it, according to the PSNI spokesperson.

Officers are appealing for information to come forward. Anyone that is offered any of the stolen items, or who see similar items on offer, is asked to contact the PSNI.

Farmers in particular are asked to be aware of anyone offering them large animal vaccines for ‘ridiculously low prices‘, a spokesperson for the PSNI said.

Their lifespan out of the fridge is only a couple of hours. Unless you had them in your animal by 7am they’re useless.

“Far from helping your livestock at a cut price, they could do them damage. There’s people out there with contempt for the vets’ livelihoods. By offering you dud vaccines, they’re showing the same contempt for you,” the spokesperson said. 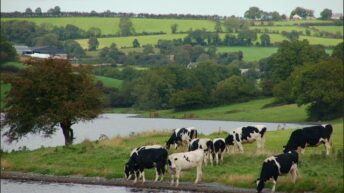