American dream: ‘If we can’t do it for beef, sheepmeat is a fantasy’ 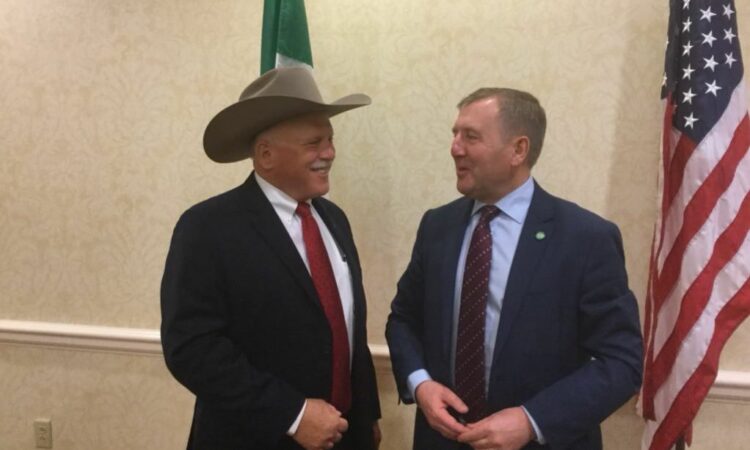 If the Government can’t persuade Irish Americans to eat juicy grass-fed Irish steaks, it’s “a real stretch of the imagination” to think electronic tags will result in sheepmeat success, a leading farm lobbyist has warned.

Speaking after a recent announcement from Minister for Agriculture, Food and the Marine Michael Creed, that compulsory electronic tagging (EID) will be imposed on all sheep from October 1, Eddie Punch of the Irish Cattle and Sheep Farmers’ Association (ICSA) has outlined his opposition to the move.

Under the new rules, lambs under 12 months of age moving directly to slaughter from the holding of birth will be required to be identified with a single electronic tag.

When it comes to lambs going into a factory directly from the farm they were born on, the ICSA general secretary argues that the decision is “illogical“.

“The majority of lambs on sheep farms are born in March and they are sold directly to factories during summer or autumn.

In that scenario we see no logic to it at all because the lamb is tagged before it goes up on the truck. An hour later the ear, the tag, the whole shebang is thrown into the skip.

“I couldn’t say that we support that even in principle, because we just don’t see the logic in it,” he said.

According to various tag suppliers, the cost of electronic tags for factory lambs is in the region of €1.05 including VAT; while the cost of a conventional factory tag is approximately €0.18 including VAT.

However, Punch contends that primary producers should not have to pay for increased efficiency at meat factories.

“A store lamb from a hill farm might be worth no more than €25 or €30; so you can see why they have a problem with it.

“All of this is a huge cost. I understand, and we have members that are actually in the business of buying in store lambs, in that scenario there is a logic to it because you are mixing all sorts of different batches of lambs from different farms and the paperwork can be quite horrendous, so in those traded lambs I can see the logic.

“But the way we would look at it is, in a low land sheep system, according to Teagasc, the average cost for a profit monitor farm of producing a lamb that is fit for slaughter is €86.

“On the other hand, if you examine the Bord Bia figures over about five years typically the average value of a lamb is about €100 – so the profit out of the lamb is €14.

If you add €1 of totally unnecessary cost that is a 7% deduction in the profitability of what is already not a terribly profitable business,” he said.

Speaking to AgriLand last month, Minister Creed said he is increasingly finding that the country’s current lack of EID is an impediment to international sheepmeat market access.

However, Punch refuses to accept this reasoning.

The minister has also stated his intention to introduce a one-off support measure – up to a maximum of €50 per keeper – for the first purchase of EID tags.

“We have no confidence that farmers will get the benefit of market access; that will be for the benefit of Ireland’s export figures and meat factories.

“We don’t see why farmers, who already get such a poor shake up in the food chain, should have to pay,” he said.

We are sick of hearing that every time the meat industry or ‘Ireland Inc.’ has regulatory or marketing problems, or an international markets issue, the solution is to impose all the cost on the primary producer.

Punch suggests that levies should be imposed on international consumers instead.

“Every time the Government does a deal with America or China or wherever, why don’t they impose a tiny levy, built into the price, payable by the international customer,” he said.

Although he accepts that such a move could undermine potential deals, he holds firm to the notion.

“If they really, genuinely think that putting an electronic tag into a lamb’s ear for one hour is going to make a real difference to traceability, fine, let them pay for it. But they won’t get it from New Zealand.

It’s just too easy all the time for the meat industry, Government and Bord Bia to say the solution is: ‘Sure the farmer is the sitting duck to pay all this extra cost – we’ll charge him.’

Even with the addition of the mandatory EID system, Punch remains doubtful about its potential impact on international sheepmeat market access.

‘We’ve sold damn all to the US’

“We have been listening to that on beef as well for the last six or seven years when Simon Coveney spent a lot of time in the US.

But the reality is we have sold damn all beef to the US. Beef is a big deal over there; they eat a lot of beef; they hardly know what sheepmeat is.

He said if the country is already failing to sell grass-fed Irish beef to the US, “it’s a real stretch of the imagination to think we can succeed in sheepmeat”.

Up until the end of April this year, Irish beef exports to the US were up 31% on the same period last year.

According to data from the United States Department of Agriculture (USDA), a total of 880t of Irish beef made the trip across the Atlantic Ocean by the end of the fourth month of 2018.

When asked for his thoughts on why the US export figures for beef remain low; Punch suggested that it is perhaps due to a let-down on the marketing side.

“Irish beef is absolutely top of the premiere league when it comes to traceability; we have levels you wouldn’t get anywhere else in the world.

Plus, you have the marketable attributes of the Irish connection and the grass-fed angle – yet still; it isn’t working.

“How do they now think electronic tagging is somehow going to be the silver bullet when we can’t persuade the Irish American diaspora to eat juicy Irish steaks in a New York or Boston steakhouse?”

Following the success of Irish dairy and pork exports in China, and recent market access for Irish beef exports, Minister Creed has alluded to potential sheepmeat access down the line. He hopes that mandatory EID tagging will progress future access.

However, Punch anticipates that such access will be another slow burner.

The minster has said he is not actively pursuing sheepmeat access to China yet; and, as you know, China takes forever.

“We’re 10 years trying to get in for beef, so if we’re not actively pursuing sheepmeat at the moment in China then we ain’t going to be there anytime this side of 2030 I would say.”