All aboard the ‘train’: Rake and bale your silage in a single pass 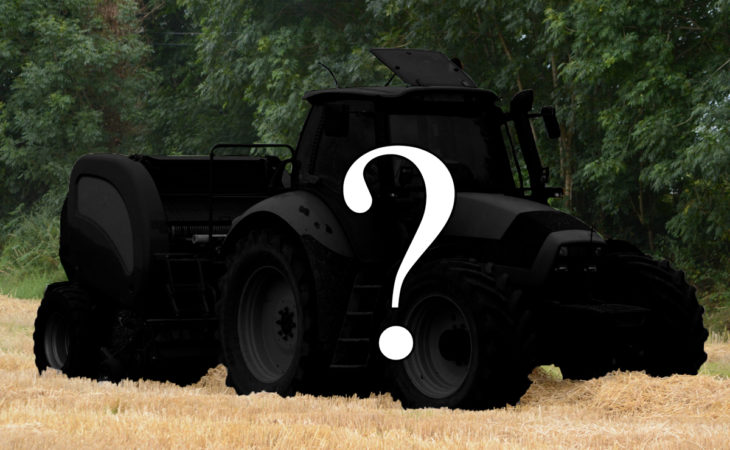 Below (see video) is the ‘Hay Train’. It’s a contraption that enables you to attach your rake (or grouper) to your round baler – thus carrying out two operations with a single pass of the tractor.

The ‘machine’ was doing the rounds back in 2012; the footage (below) shows the unit in action – coupling a ‘spider-wheel’ raker a John Deere 468 baler (which, in turn, is mated to a John Deere tractor).

The unit attaches to the baler’s drawbar (or tongue, as they say in the US) – allowing you to tow the rake in-line behind the baler on the road and off-set in the field. It was designed to pull eight, 10 and 12-wheel ground-driven rakes.

It comprises a 20ft-long boom (riding on a dolly wheel). A pivot (at the front of the boom) allows the rake to move in or out of the required line.

To attach or disconnect the rake, it’s simply a case of inserting/removing a pin and coupling/unhooking a pair of hydraulic hoses.

We’re not quite sure what’s happened to the ‘Hay Train’ concept since; there’s little mention of it on Premier’s website at present.

Who or what is Premier?

Premier is based in Fort Wayne, Indiana (US). There, it’s known as a manufacturer of machinery parts and accessories such as hydraulic earth-auger attachments, trencher attachments, pallet-forks, bale-spears and snow-ploughs.

As well as agriculture, it sells its wares into the light industrial and construction sectors. The company also custom manufactures parts and accessories – for bespoke projects. It claims to have the equivalent of four decades of “combined experience” under its belt.

Premier was founded back in 2001. The first products offered were so-called earth-augers; it now sells to customers across the US and Canada – though a network of dealers.

Earlier this year, we brought you details of Agronic’s approach to one-pass raking and baling. Its WR500 front rake is designed to be used on either a tractor’s front linkage or even on a front loader.

It’s principally aimed at contractors; the idea is that the rake is attached to the front of the tractor that’s driving the baler (or a ‘combi’ baler/wrapper).

While there are other front-mounted rakes out there, Agronic says its WR500 is purpose-designed for this job.

In work, the rake is in the ‘float‘ position – with its weight bearing down on its own wheels (as is the case for a typical ‘trailed’ rake running behind a tractor).

The working width (up to 5.1m) is hydraulically adjustable; the operator does not need to leave the tractor cab when switching from ‘work’ to ‘transport’ position. The transport width is close to 3.5m on ‘standard’ versions; it is possible to configure a variant with a transport width of just 3m. 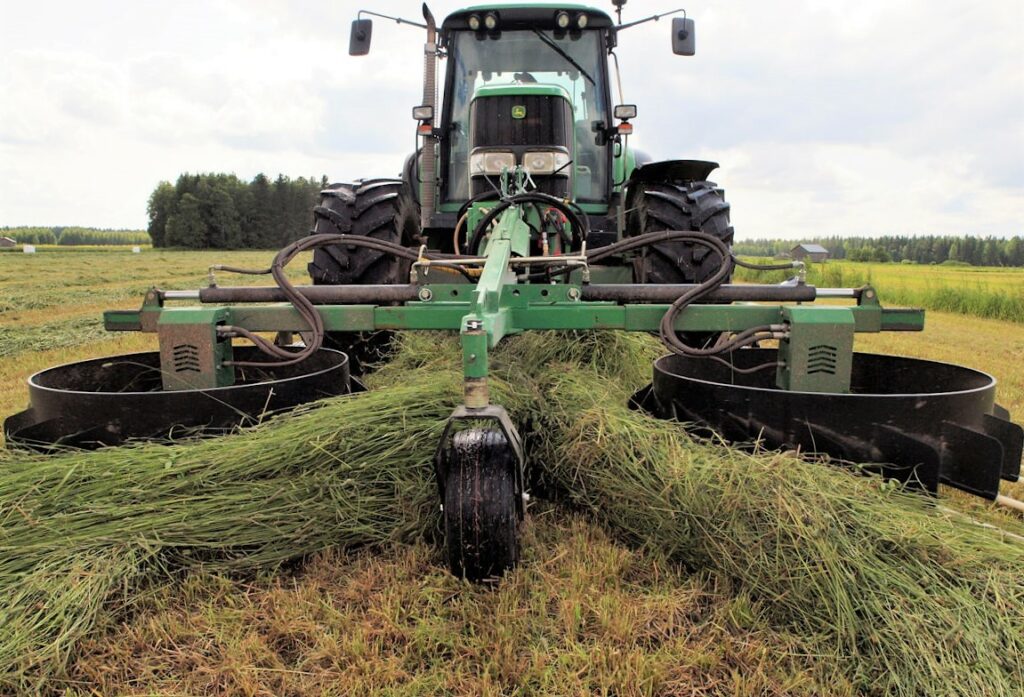 Drive to the rotors is hydraulic. Rotation speed of the rotors is controlled by regulating the oil flow. The tractor must be able to muster a minimum, continuous throughput of 20-35L/ min (which is relatively modest). 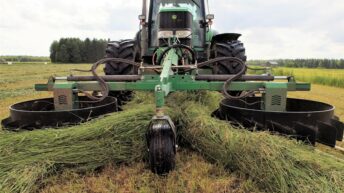 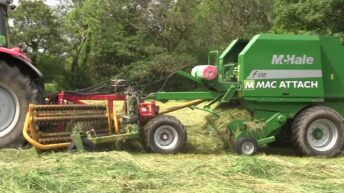 One-pass raking and baling: What is the best approach?