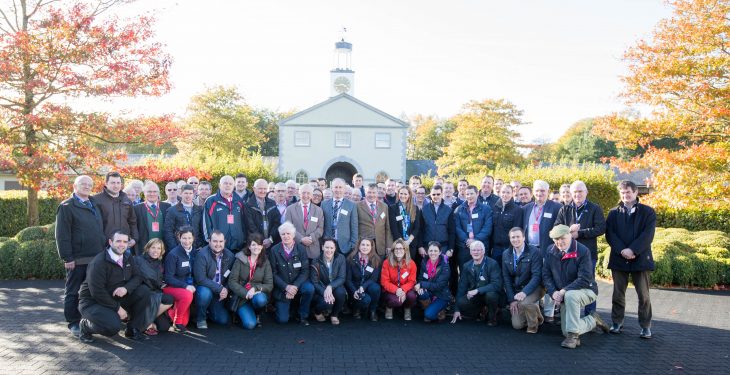 Visitors with Aidan O'Brien on the ASA visit to Ballydoyle Racing Stable in County Tipperary.

The ASA members, representing every facet of the agri-food industry, experienced an incredible tour of Ballydoyle, according to ASA President Mary Delaney.

“The ASA were honoured to get the opportunity to visit Ballydoyle Racing. It was a remarkable tour and Aidan was inspirational.

“The experience has generated a whole new fan-base for Irish Racing and the thoroughbred industry,” she said.

The 60 members of the ASA were given a guided tour of Ballydoyle Racing including its gallops, stables and other racing facilities on Monday, October 17.

The members were then afforded the opportunity to meet and greet O’Brien, with the group captivated by his professionalism, openness, and honesty, Delaney said.

O’Brien has been the trainer at Ballydoyle Racing since 1996 training more than 290 Grade 1 horses so far, with 21 wins coming this season alone.

Recently, he celebrated a podium sweep after Found won Europe’s most prestigious flat race, the Prix de l’Arc de Triomphe, at Chantilly and his superstar filly Minding won her seventh Group 1 win in the Queen Elizabeth Stakes at Ascot.

The ASA, which has almost 1,600 members, is the professional body for graduates in agricultural, horticultural, forestry, environmental and food science.

Meanwhile, Irish produce is set to taken centre stage at one of the worlds largest horse racing events, the Breeders’ Cup World Championships in the US.

Irish beef will be served as the feature dish at the Taste of the World experience, a private culinary event which will take place in the Warner Bros Studio on Thursday, November 3, 2016.

Good Food Ireland has co-ordinated Ireland’s involvement in the event with the support of Bord Bia and Dawn Meats.