Farmers have been warned to be vigilant after a bad dog attack left nine sheep dead with a further three needing to be put down due to injuries earlier this week.

Issuing the warning, Northern Ireland based veterinary practice Orchard Veterinary Centre Armagh explained through social media the incident that had occurred near the village of Keady in Co. Armagh.

“We were called today to the Keady area for a particularly bad case of sheep worrying.

Nine sheep were killed yesterday [Monday] by a group of two-three large dogs and I had to euthanize three more because of severe bite injuries; another 10 in-lamb ewes were chased badly too and can often end up aborting their lambs in these cases.

“These poor defenseless creatures stood no chance against them.

“Farmers, please be vigilant to avoid more loss of life. This is why dogs cannot be allowed to roam as this is an example of the real damage they can do,” the practice warned.

The statement released by the veterinary centre was accompanied by photos, one of which is below. 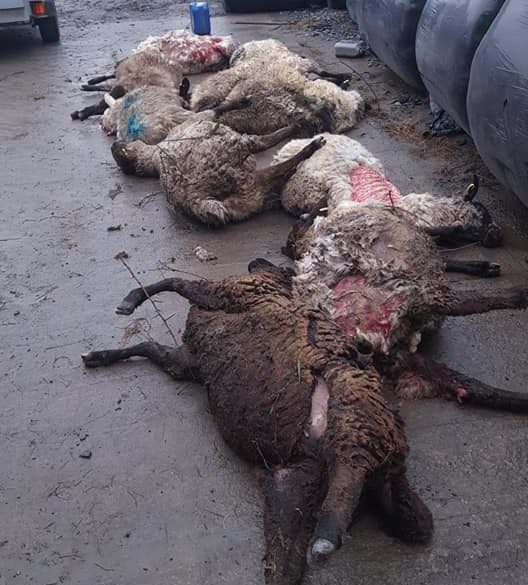 In Northern Ireland, local councils are responsible for dealing with all incidents of livestock worrying.

Last year, two dog owners received destruction orders to have their dogs destroyed – while £2,324 was collected in fines from dog owners whose pets had engaged in incidents of livestock worrying.