500hp on tap: Who said that big 2WD tractors were dead? 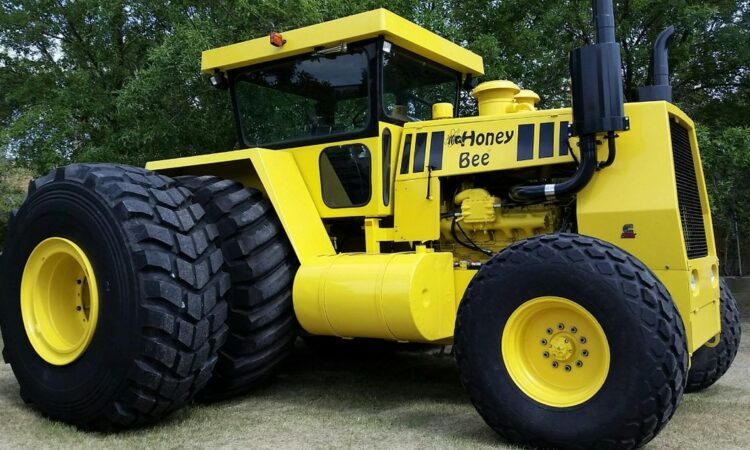 Is this 500hp ‘Honey Bee’ (pictured above) one of the most powerful 2WD agricultural tractors in existence?

It certainly must rank highly in the running for such an accolade.

This Honey Bee badged contraption was built/assembled by Greg and Glenn Honey of Bracken, Saskatchewan (Canada) back in the late-1970s.

According to farming outlet Real Agriculture, this “giant yellow and black workhorse came to symbolise farmer ingenuity and sheer power”.

This original 500hp version – noteworthy for its 2WD configuration – turned up at Canada’s Farm Progress Show a few years back – apparently the first time since its debut at the event in 1979.

Powered by a Cummins VTA-1710 (V12) engine and fitted with a 13-speed Eaton transmission, the imposing-looking tractor served as a front-line unit on Honey Farms right up until the mid-1990s.

Real Agriculture reports that the machine cost just $40,000 to build. The fact that the brothers opted for a “simple 2WD system rather than an articulated, 4WD design” helped to keep costs in check.

They actually constructed a second (similar) tractor in 1980; that unit (unlike its older sibling) has a CAT (Caterpillar) engine.

However, no futher units were built. As Greg Honey explained to Real Agriculture, they decided to “focus their manufacturing efforts on building swathers and headers, rather than competing against other tractor brands”.

The older, Cummins-powered tractor (the ‘Honey Bee 1‘ as it’s sometimes known) was actually stripped, sand-blasted and re-painted some years ago – ahead of its return to the show circuit. It reportedly had circa 6,000 hours on the clock.

This video (below), from Muddy River Agricultural, shows the tractor being started. Listen to its throaty, rumbling engine note – clearly audible when the beast fires up.