Family farm income (FFI) distribution made for stark reading in the preliminary results of the Teagasc National Farm survey 2019 – with figures revealing that 44% of farms earned less than €10,000 last year.

Meanwhile, on the other end of the scale, 4% of farms earned in excess of €100,000 last year. The results were published on Monday, June 29, and are representative of over 90,000 farms in Ireland.

FFI, the return from farming for farm family labour, land and capital, is the principal measure used in the Teagasc National Farm Survey. FFI varies considerably by farm system, with dairy farms consistently being the most profitable, according to the report.

In terms of distribution of family farm income by percentage, more than three-quarters of Irish farms earned under €30,000 in 2019.

A breakdown of the distribution shows the following:

According to the Teagasc report, a large gap between the average income levels in dairy and drystock is evident.

However, Teagasc underlined that these average farm system income levels are each calculated for system populations that have a wide variance. 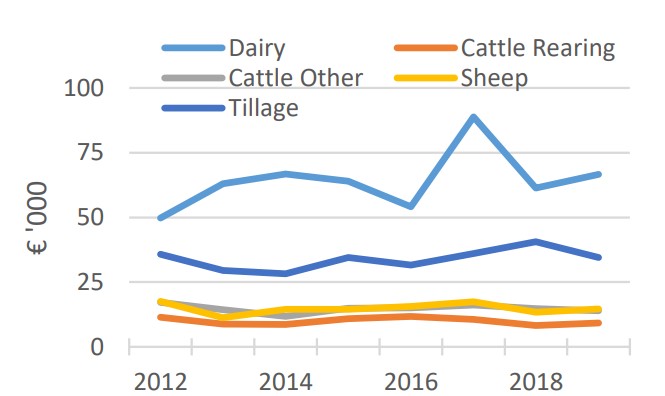 Better performing (and generally larger) drystock farms will have income levels much closer to some dairy farms, the report said.

Teagasc also highlighted the continuing volatility of dairy FFI, particularly in the years since milk quota removal in 2015.

This, the authority says, “reflects a combination of variability in milk prices, production conditions and particularly the fact that a smaller share of income on dairy farms comes from support payments”.

This means that the year-on-year variability in profit margins on dairy farms (before support payments are considered) is sufficient to result in quite a lot of income variability from year to year.

Income volatility has also been a concern with respect to tillage farms. Nevertheless, there were three successive years of income improvement from 2016 through to 2018. However, upward income trend was largely reversed in 2019.

However, given the wide variation in average income levels between systems, Teagasc believes a summary figure “is not a particularly useful measure of farm performance”. 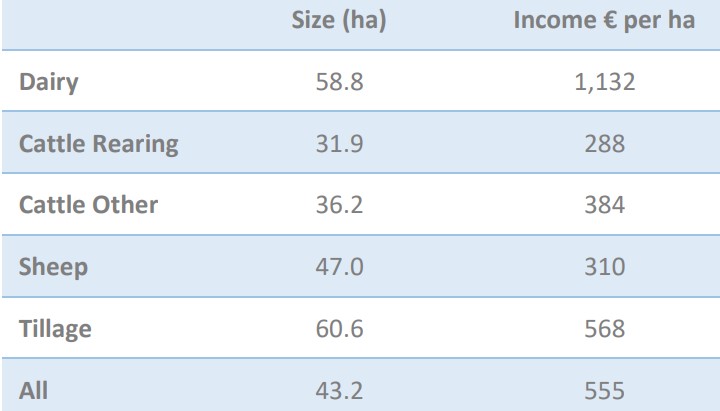 The large variation in average farm income across farm systems is related to differences in both farm size and profitability per hectare, Teagasc notes.

Overall, the average farm size in 2019 remained just over 43ha and the average income level per hectare increased slightly relative to 2018 to €555/ha – but still remained well down on the €693 recorded in 2017.