To date, two test centres have been authorised to carry out road-worthiness tests on ‘fast’ tractors – though the number of authorised centres is expected to increase, the Road Safety Authority (RSA) has confirmed.

A ‘fast’ tractor is defined as a tractor that has a maximum design speed which exceeds 40kph. The requirement to test these tractors was brought in under an EU directive that came into play on May 20.

However, it was announced earlier this year that there would be some exemptions.

A fast tractor will not have to undergo a commercial vehicle test if it is used:

But tractor drivers were warned by the RSA that these exemptions are not an excuse for not having a vehicle in roadworthy condition when using it on a public road.

The road-worthiness testing of ‘fast’ tractors will be carried out in a number of authorised heavy commercial vehicle (HCV) testing centres within the Commercial Vehicle Road-worthiness Testing (CVRT) network.

As it stands, ‘fast’ tractors can be tested by the Banner Vehicle Centre – with an address in Lismuibreeda, Darragh, Ennis, Co. Clare – and by Kelly Trucks Ballaghadereen – which is located on Lung Road, Ballaghaderreen, Co. Roscommon.

Examples of fast tractors which will require testing include those used in or for:
Advertisement

Tractors required to be tested must be put under the spotlight once they are four years old. Following that, they will have to be tested every second year, the RSA explained.

‘Fast’ tractors which are currently four-year-old or more will need to be tested “as soon as possible”, the authority added.

People who use a vehicle without a valid certificate of road-worthiness (CRW) could end up in court. On conviction, a fine not exceeding €5,000 or imprisonment for a term not exceeding three months – or both – may be imposed, the RSA explained.

Five penalty points would also apply on conviction, it added.

More details regarding the testing of ‘fast’ tractors – including what the test entails – are available online. 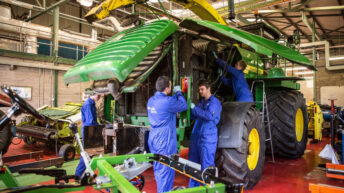