Is the tide set to turn on cattle prices? (factories report supplies falling)

Beef factories are reporting a tightening in cattle supplies, but say there will be ‘minimal movement’ in prices in the short term.

Cattle supplies at Irish export meat plants for the week ending April 1 stood at almost 30,000 head, which was on a par with the equivalent week in 2015.

Cumulative supplies of steers and heifers are up 4% and 1% respectively while cows are back 6% so far this year.

According to one industry source, while supplies of cattle are becoming ‘bigger problem’ in recent weeks price movement will be minimal.

He cited the negative movement in sterling from an Irish export perspective as a key factor and noted that the beef kill is quite high for the time of year.

However, IFA National Livestock Chairman Henry Burns said the tide is turning on cattle prices with supplies tightening rapidly and factories increasing prices to get numbers.

He said prices have moved on with some deals of €4.00 base on steers and €4.10 base on heifers paid for this week.

Henry Burns said feeders needed to ‘dig in hard’ and demand a strong price increase at this stage. 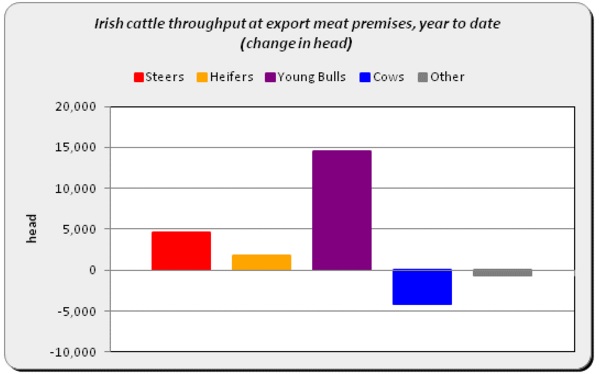 In general, he said the base for steers is €3.95/4.00 and for heifers €4.05/4.10/kg. In addition, he said carcase weight is much less an issue with some of the big plants doing deals with no weight limit cuts.

According to Bord Bia the cattle trade has firmed for the week ending April 1 with demand relatively good and some reports of tightening in supplies in areas following the Easter holidays.

However, it said trade continues to remain mixed across our key export markets.

Steers in general, were purchased at an average base price of €3.90/kg on the Quality Payment System. For heifers, the base price payable was typically making €4.00/kg. These prices exclude the 12c/kg bonus payable on in-spec QA animals.

Demand remains subdued while strong supplies are also putting pressure on the trade. Trade was slow for most cuts with topsides performing best. Looking at exchange rates the euro continues to strengthen against Sterling.

In France, Bord Bia says the market remains slow with demand best for Angus beef, while cheek and tongue demand has eased.

Beef promotions were mainly in Carrfour centred on domestically produced burgers, mince and stewing beef. The R3 young bull price was back 1c making on average €3.71/kg while the O3 cow price increased by 1c and was making €3.10/kg.

In Italy, the market has shown little change on the back of slow demand with wholesale prices remaining steady.

The R3 young bull price was making on average €3.93/kg while the O3 cow price decreased by 5c making €2.46/kg. In terms of the live trade demand continues to remain positive for prime cattle.