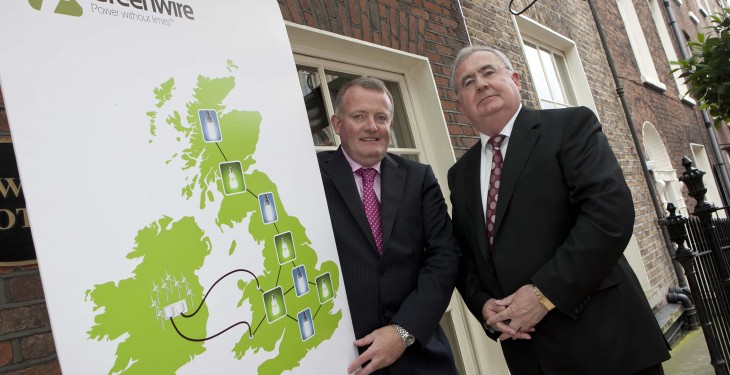 An outline of Element Power‘s Greenwire project to develop 40 wind farms on 20,000 hectares of lands in the Midlands for export to the UK on new dedicated grid connections was given by its CEO Tim Cowhig, who spoke at the Joint Oireachtas Committee on the Environment, Culture and the Gaeltacht yesterday evening.

The company was established in 2008 and specialises in the development of onshore wind with a presence in 16 countries. it has Irish offices in Tullamore and Cork City.

The CEO outlined its plans to create a new energy industry in Ireland, noting that more than 1,000 farming families in the Midlands are keen to see this project proceed. In addition he stressed Britain’s energy challenges should be seen as Ireland’s opportunity.

“We are moving towards a European energy market where a trans-european power network connecting countries across Europe would facilitate surplus power flowing to where the electricity is needed. It also makes Ireland more self reliant in the event of a crisis,” he said.

“In Ireland, we have an abundance of wind, much more than we need for our own needs so we have an opportunity to create a new export industry such as our beef and dairy export businesses creating thousands of jobs.”

In its document, ‘Strategy for Renewable Energy: 2012 – 2022’, the Government has identified the export of renewable energy as one of five strategic goals.

“With that in mind, the Irish and British Governments are hoping to deliver an intergovernmental agreement very soon to facilitate the trading of renewable energy between the two countries. A strategic environmental assessment and new planning guidelines are also being drafted by the Irish Government. Our project therefore, is in line with Government policy,” he stressed.

In terms of the UK market and its energy needs, Element Power’s CEO said: “Our British neighbours had been energy independent since the discovery of North Sea oil and gas in the 1970s.  However, those reserves are nearing depletion and the UK is once again facing a reliance on imported energy to meet its demand. The UK is also decommissioning its ageing nuclear and coal powers stations. These currently supply some 20 per cent of its energy.

Element Power’s Greenwire project now plans to develop 40 wind farms on 20,000 hectares of lands in the Midlands for export to the UK.

“The Midlands region possesses an enormous and largely untapped natural resource in wind energy,” its ceo explained. “And tapping that resource could have a transformative effect on the economy of the Midlands.”

In terms of its community benefit programme, he explained if granted planning permission, Element Power will establish a comprehensive programme in particular for those living closest to the turbines.

“The Community Benefit Programme would consist of a number of components in particular a near neighbour fund for those living closest to turbines, a Local Community Fund, an Educational Fund and and an Enterprise fund,” he explained.

According to Element Power, it has met more than 100 community groups over the past two years who are interested in participating in this programme.

“We propose a total investment of €250m into the Midlands by way of Community Benefit for a 3GW project. That could have quite an impact on the communities of the Midlands,” the CEO confirmed.

“This €10m per year community benefit scheme added to €50m in rates and rent each year would see Element Power contribute a minimum total of €1.5bn to the local economy over the 25-year lifetime of Greenwire.”

He also explained that the payment to local authorities in Offaly, Westmeath and Laois would amount to between 40 per cent and 50 per cent of the entire rates income, which those counties presently enjoy.

In terms of the employment potential of Element Power, he said the construction works required for up to 3,000 MWs of wind power as well as installing an electrical network underground can create approximately 10,000 construction jobs.

“The only way this project will be delivered is with locally sourced employees. It is normal procedure in Ireland that all balance of plant is sourced locally,” Cowhig added.

Element Power was keen to stress that Ireland has the potential to be involved even more significantly in the supply chain of the wind energy industry.

“If we’re to develop an export project in the Midlands and capitalise on this pioneering opportunity, we must act swiftly. The window won’t stay open indefinitely, Britain needs this renewable energy by 2020. If we are to embrace this opportunity, the Irish and UK Governments need to finalise a detailed Intergovernmental agreement quickly that will allow the trading of renewable energy between both jurisdictions,” the CEO concluded.