John Hayes: ‘When you’re young you think you’re bulletproof on the farm’ 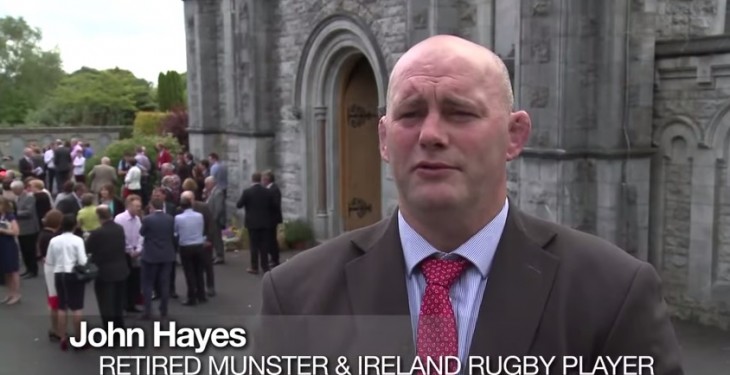 Farmer and former Irish rugby player John Hayes says that now when he goes out to do something on his farm, he does it the safest way even though it might not be the easiest way.

Hayes was speaking at the recent Embrace Farm Remembrance Service held in Abbeyleix in memory of those who have lost their lives on Irish farms.

“As a young fella you think you’re bulletproof, you can do what you want when you go outside.

“Now, you take time when you have children like I have myself, I’ve three young children, you’re more aware and you have to be more careful when they’re with you,” he said.

Over 100 names were read out at the ecumenical service submitted by the bereaved of loved ones who died in accidents on farms.

Farmer and former Irish rugby player John Hayes was at the service and says that now when he goes out to do something on his farm, it might not be the easiest way but its the safest way.

Also in attendance at the service was the Minister for Agriculture Simon Coveney, his Northern counterpart Michelle O’Neill and MEP Mairead McGuinness.

Over 700 people attended the service the organisers, Embrace Farm, said.

This years service came after a horrific 2014 in which 30 people lost their lives on Irish farms, it said.

Embrace Farm was founded by Shanahoe, Co. Laois farmer Brian Rohan, whose father Liam died following an accident on the family farm in 2012, last year to act as a support network for families affected by farm deaths.

Speaking following today’s event he said that the service was an opportunity for people who have suffered terribly as a result of farm accidents to come together in solidarity and support.

“There was an awful lot of collective pain in the Church but in coming together like this we just hope that it can help with the healing process, which is an ongoing one,” he said.